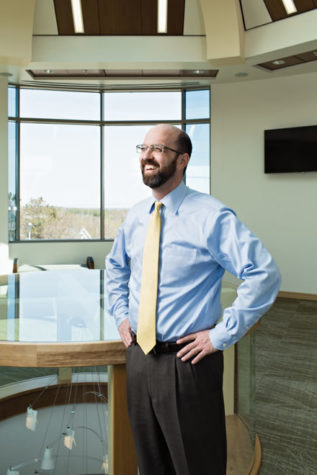 Yellow Light Breen, executive vice president and chief strategic officer at Bangor Savings Bank, says, “You are only as good as your constant drive to be even better.” During Breen’s tenure, the bank has earned a Best Places to Work in Maine six times and, in 2013, recognition by J.D. Power and Associates for highest customer satisfaction in retail banking for New England. In 2006, Breen led the “You Matter More” rebranding campaign for the company. He also helped create the bank’s annual Community Matters More program, in which voters decide where to invest $100,000 of grant money. This year 68 Maine-based nonprofits, such as libraries and educational foundations, received awards. Outside of Bangor Savings Bank, Breen helped launch the Maine Learning Technology Initiative which brought technology to 30,000 middle school students in every part of Maine. He was also on the steering committee in 2004 that developed the Realize Maine Network, a statewide young professionals network that helps aspiring leaders and has resulted in regional counterparts all over the state, such as Fusion:Bangor, Midcoast Magnet, Young Professionals of the Lewiston Auburn Area, and Cynergy in Augusta. “My passion is to bring opportunity to the whole state and to enable equal opportunity for success in life without regard to geography or income.”