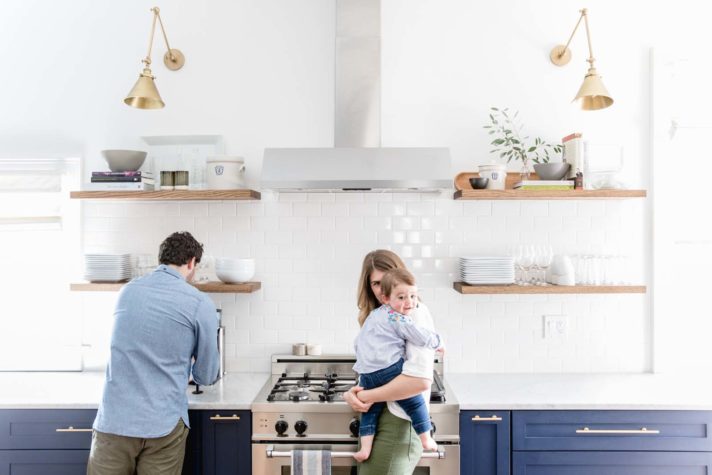 Louis-Pierre, Heidi, and Chloé Lachapelle hang out in their West End kitchen. 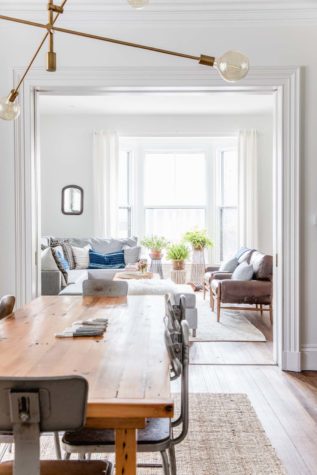 The couple wanted a brownstone, but this old house ended up being perfect for their family. The sunny living room, which faces the street, was a major selling point. In the dining area, they have a table that Heidi’s father built using wood from a renovation job the couple did in Montreal, as well as vintage chairs sourced from a restaurant in their former neighborhood in Montreal. 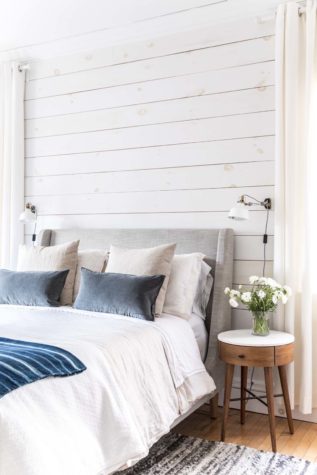 While the couple loves color, they decided to keep the palette for their house fairly neutral and soothing. “We put up that paneling behind the bed to add a bit of personality and texture to our bedroom,” says Heidi Lachapelle, who also advocated for linen bedding (which she highly recommends). 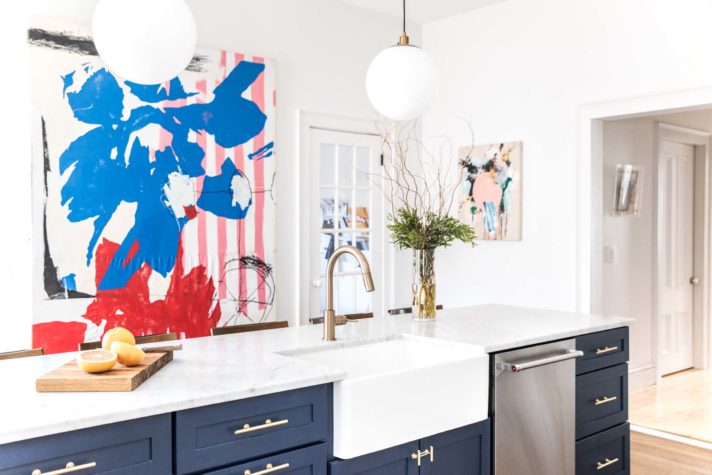 When the Lachapelles first bought their home, the kitchen was located toward the front of the house, but they wanted a bigger and brighter space for cooking and entertaining, so they shifted the layout. Now the kitchen opens into their private backyard. 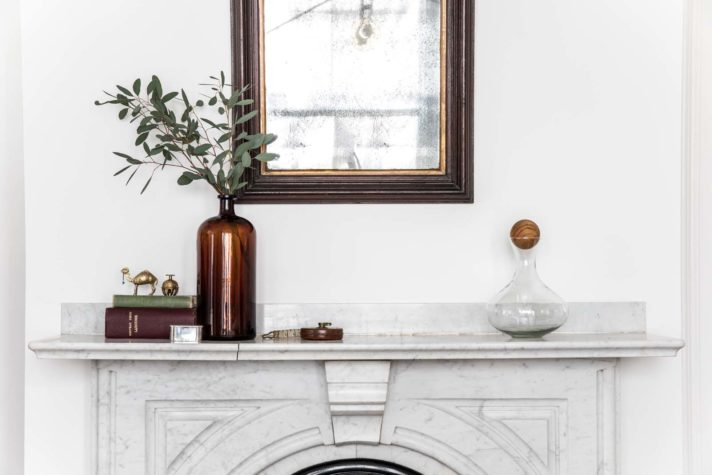 The Carrara marble fireplace and mantel was original to the house. “It was a unique feature that I fell in love with, and it was a ripple effect to use Carrara in the kitchen,” says Lachapelle. 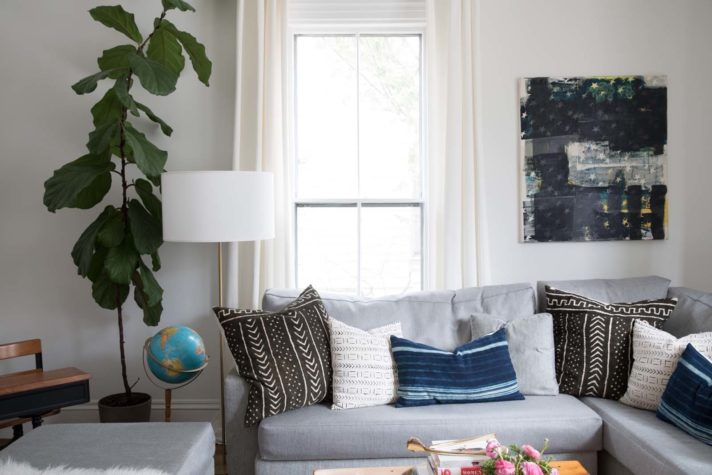 The living room couch was custom-built by one of the couples’ friends who makes furniture. “My mom made all the pillows using vintage textiles we bought in Brimfield,” Lachapelle reveals. 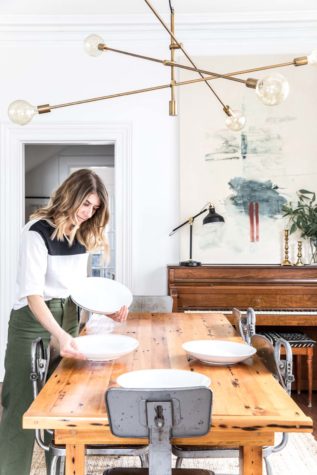 Below a chandelier from West Elm, Lachapelle sets out plain white plates for dinner. The painting is by Louis-Pierre Lachapelle.

An almost-perfect apartment in the West End is filled with antique finds, clever fixes, and ones-of-a-kind artworks

“Nothing is too precious,” says Heidi Lachapelle. We’re sitting at her kitchen island drinking cups of bitter, nutty coffee, and she has just explained the ethos of her home. She is referring specifically to the Carrara marble countertops. “They have a honed finish,” she says. “It’s more of a French bistro look. You see the etch marks? That’s something I wanted.” Marble, she says, is “not for everyone.” It gets chips and cracks from use, and it never looks quite as perfect as the day you brought it home. But that’s the point, she says. “It fades over time, and the scratches become a part of it,” she explains. “We like things like that— beautiful, but not precious.”

Lachapelle is an interior designer who lives on the first floor of this Portland townhouse with her husband, artist Louis-Pierre Lachapelle, and their infant daughter, Chloé. I’m always curious to see how builders construct their own houses, how architects draw up their dream abodes, and how designers pick and choose items for their own sleeping quarters, their own kitchens. Lachapelle’s home is an interesting amalgamation. It is both a way to showcase her work (a “three-dimensional business card,” she calls it) and a place to escape from the demands of emails and clients and invoices, where she can relax with her husband and child. Thus, it needs to be aesthetically pleasing and livable— beautiful, but not too precious.

“We’re perfectionists, especially when it comes to anything in our own home,” she explains. “We want it to look a certain way.” For instance, that marble countertop? They waited for a slab to come up, one that would fit just right. They didn’t want any seams, but they wanted a ten-foot-long island. It took time, but eventually they got something close to perfect. It’s a nine-foot-long piece with subtle changes in color throughout. Under my fingertips, it is smooth but not slick. It feels natural, like a fortunate accident of nature.

Lachapelle enjoys “happy mistakes.” She’s a lifelong artist, like her husband. They met studying printmaking in Rome, and she lights up when she talks about him and his work. They are both printmakers, but they’ve taken slightly different paths. His canvases are large and washed with color, abstract and fierce. Her fine art pieces are more textural, the tones more subdued. His work is his art, and her work is a combination of things. With her sister-in-law, Katie Judkins, she runs Heidi Lachapelle Interiors. She also has designed and built window dressings for Anthropologie. “I saw that as creating art for a corporation,” she says. But Lachapelle and her husband both remain committed to creativity and interested in how forces like gravity can thwart control, how accidental drips can fall so perfectly on a canvas. “There are happy mistakes in the printmaking process, and in painting,” she says. “I think that is what Louis loves in everything he does. We both like imperfections.”

This may seem like it contradicts what she’s said before, but it doesn’t. Lachapelle is a perfectionist who enjoys imperfections. She likes to work as hard as she can to create the right space, then allow time and life to mess it up. She’s a lover of antiques who stays current on the latest in furniture styles, and a businesswoman who is also an artist. You could probably find a dozen more contradictions in her life, but that’s not particularly unusual. It’s unusually fortunate, however, that she’s found a way to make her various impulses work so seamlessly together in both life and decor.

The house, she says, wasn’t designed around Louis’s paintings, but they do fit in effortlessly. In the living room, a large abstract hangs on a sunlit wall by a bookshelf. The piece is covered in large swaths of yellow and spring green, and on the white built-in shelving, someone has chosen to showcase stacks of books the colors of grass and lemons. “A happy accident,” she says. (“Plus,” she adds, “Louis and I tend to like the same color schemes.”)

Although the kitchen, with its slate blue cabinetry and brass finishings, is the “heart of the home” and one of Lachapelle’s favorite places to hang out, the living room is what inspired the couple to purchase this particular building. They were drawn to its big bay windows, and while they both had dreamed of owning a brownstone, it turned out not to matter. There are views of the West End’s historic architecture out every window. “I fell in love with these two main rooms,” she says as we walk through the semi-open floor plan into the soft light of the living space. “I wanted to respect the historic architecture while making it work for present day.” They refinished the floors, gutted the kitchen (and moved it to the back of the house), ripped out the bathroom, and created a large, open space for entertaining. They also replaced the door to the backyard with a tall, windowed door that draws the eye toward the high ceilings and mimics the high lines of the cabinetry. And they did much of the grunt work themselves.

The Lachapelles had restored several houses before, but this has been their most successful to date, although Lachapelle points out that it’s not quite done. They’re still working on a bathroom, and she mentions half a dozen other things she might someday like to do. But they’ve learned a lot working on this house, too. Lachapelle devised a new way of putting up floating shelving to create sturdy, handsome ash display racks in her kitchen. They’re strong enough to hold stacks of white plates and bowls, her grandmother’s antique ceramic crock, and a curated pile of cookbooks. “We’ve used that method in a few other houses now,” she says. “I love applying methods I used in my home to my client’s projects, and vice versa.”

While her style is continually evolving, there are a few items that Lachapelle says will remain constant, such as her pair of blue velvet chairs (which came from her childhood home) and her wall of mirrors (which she installed in the hallway between the kitchen and the living area).

This quirky and brightening collection was inspired by one of Lachapelle’s earliest style icons: her mother. “We had a mirror wall in all of our houses growing up,” she says. “My mom is a huge antiques collector—I get that from her—and I always said I wanted to have one in my house.” To get her started, Lachapelle’s mother gifted her a few select mirrors, and over time she’s added more of her own, sourced from the various places she’s lived and the various flea markets she frequents. “The goal is to have them go floor-to-ceiling,” she says. Someday, she hopes to get this house to the finish line, with a complete mirror wall and a totally up-to-date second bathroom. “And then?” I ask. “We’ll go back in a second time,” she says. “I think we could really work on this house.” 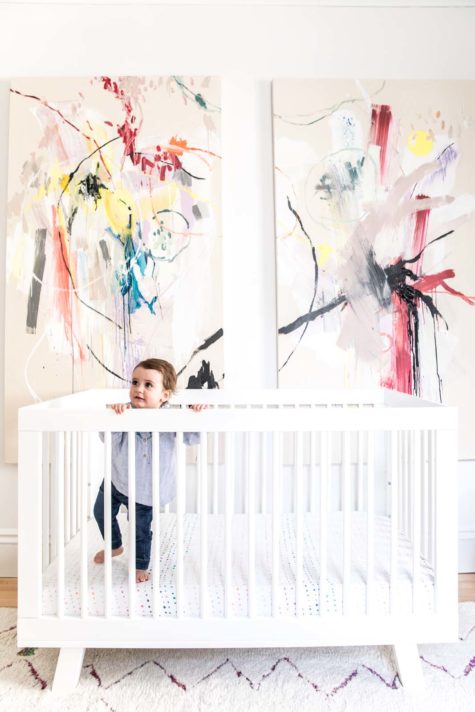 “I based the room around these oversize paintings Louis made for Chloé. I wanted to use that instead of wallpaper.” 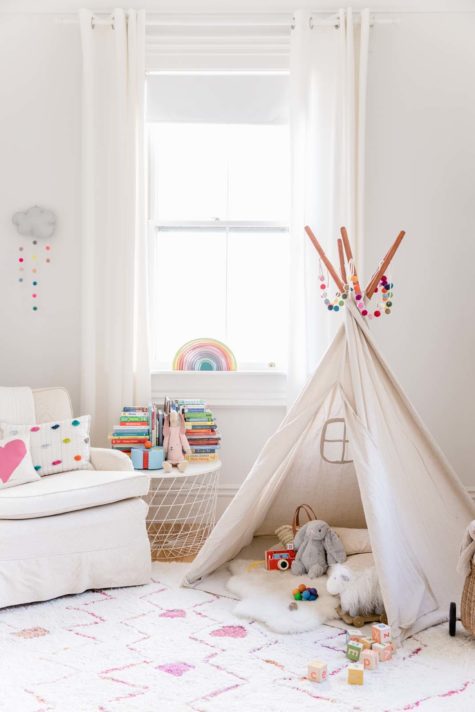 “I’m a neutral person at heart. It was hard for me to get into the mindset to use color,” says Lachapelle of designing her daughter’s bedroom. 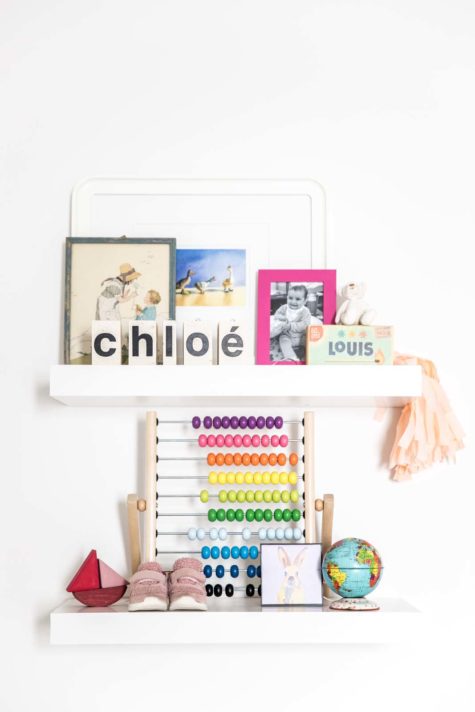