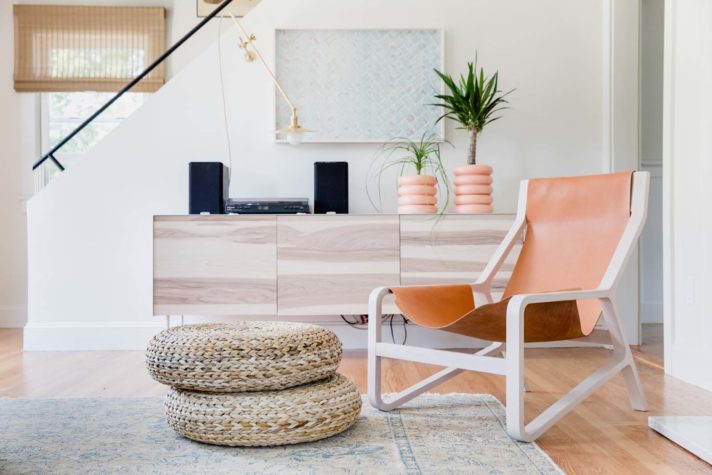 In the living room, Karu has created a sophisticated vignette of items, including funky planters, streamlined lighting, and a piece of art she created out of old checks found in the house’s attic. The orange leather chair is by Blu Dot, and the lamp is from Workstead. 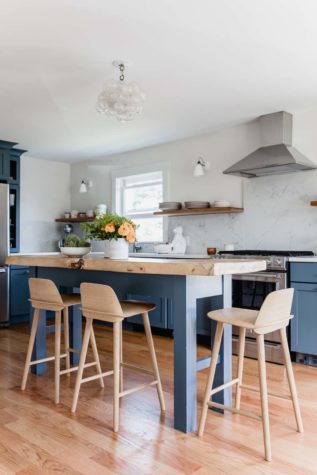 Karu designed her kitchen island to fit in with the clean, slightly masculine feel of the home. She added power outlets to the island’s legs so that she could work in the kitchen 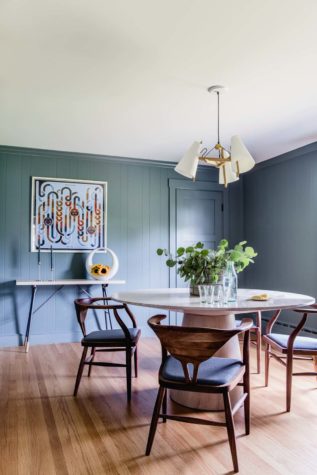 Karu’s dining room features a modern pedestal table that is “about as sleek and streamlined as you can get,” with a lime-washed oak finish, chairs made by Organic Modernism (but purchased at Marden’s Surplus and Salvage), and a framed Hermes scarf on the wall. “I searched eBay for vintage Hermes, and the one that spoke to me was funky and retro rather than traditional,” she says. “I like the juxtaposition of a super traditional French company with that ’60s inspired pattern.” 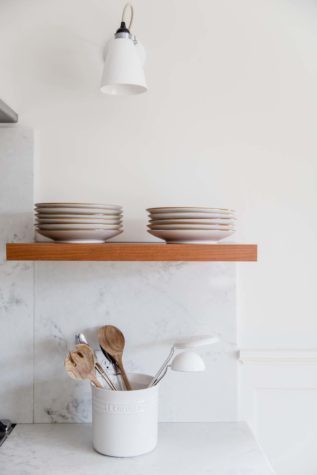 On her floating shelves, Karu has “a mix of high and low. I got the plates at Target, but they’re offset by that quartz backsplash.” 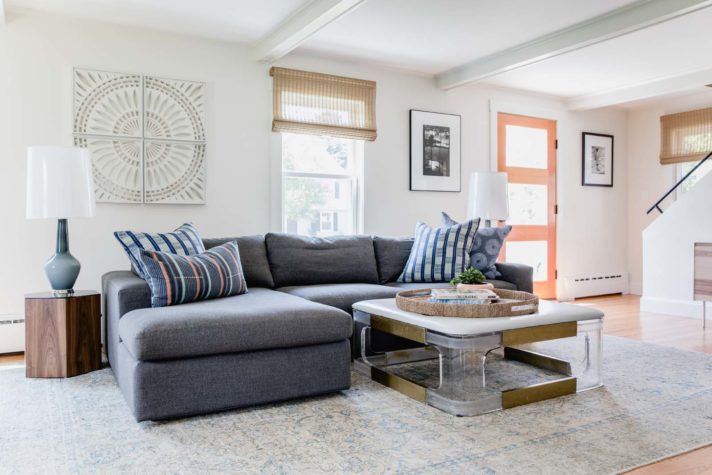 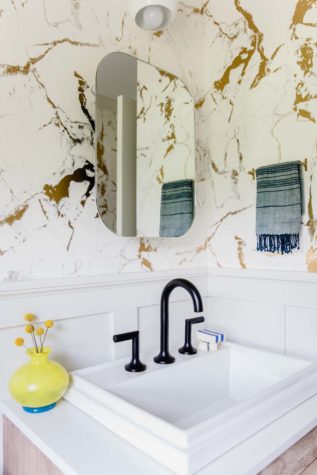 When Tyler Karu moved into her home in Falmouth Flats, she knew she wanted to keep the color palette simple and neutral, with one exception. “Blue is my jam,” says the interior designer. She’s sitting with her feet curled up under her on a low, steel-gray couch in the living room of her recently renovated 1950s Cape house. One of her three dogs, a huge white- and-black speckled Great Dane named Clyde, is sprawled on the floor next to her. He keeps his big blue eyes on her as she searches for the words to describe her favorite color— the moody, gray-tinted blue of the Atlantic.

“It’s the color of a cold Maine day. You can hardly capture it,” she says. “But it’s really the only color I implemented here other than neutrals. I wanted to keep the house a blank slate.”

The kitchen cabinets, which are visible from the couch thanks to the open floor plan of the downstairs living space, are painted this elusive hue, providing a visual anchor for the airy space. Surrounded by blue, Karu can look out at the ocean while she sits at her workstation. This is another change she introduced during her renovation. “The kitchen layout was essentially not functional when I bought the house,” she says. “You had these amazing water views from the kitchen, and they put cabinets right in front of it.” In order to take advantage of her enviable location, Karu worked with Southern Maine General Contracting to rearrange the flow of the kitchen and living room, add new windows, and create a few custom built-ins, like low-lying storage space with built-in dog bowls for her three canine companions.

Karu had worked with this builder many times before in her professional life. “They’re my A-team of guys,” she says. As a designer, Karu works primarily on large- scale renovations and construction projects, which made her modestly sized house a departure from the norm. However, having been in the business for nine years, Karu was more than equipped to tackle the challenges that come with a home renovation. “Before I moved in, this house had been vacant for 11 years and it hadn’t been touched or updated since the early ’80s,” Karu explains. “There was carpet everywhere, and the paint had all faded into this dingy, dusty backdrop.” Although the lot was prime and the structure itself had clean lines and strong bones, the place needed work.

Karu purchased the Cape in 2016 and embarked on a “three-month-long whirlwind renovation,” as she puts it. “The whole house is an exercise in intentionality. I didn’t want anything to look too busy, but I wanted everything to feel collected and cohesive.” She kept the simple architecture intact, adding subtle details here and there to help pull the rooms together, like a quartz style base for the grainy wood to rest upon. “I stuck some power in it, so now I can sit at the kitchen and work, while keeping an eye on everything. I can look out at the water, and watch my dogs play in the backyard,” she says.

Although Karu factored her pets and their propensity for leaving muddy paw prints into her decor, she ultimately decided not to forgo rugs or other textiles. “Personally, I think rugs and floor coverings are very important and worth the investment. Good rugs can stay with a family for generations,” she says. Hers were also a steal; she purchased four high-end rugs from Los Angeles line HD Buttercup at Marden’s Surplus and Salvage, where they were heavily discounted. “I didn’t need them at the time, but I knew they were worth the money,” she says. She also picked patterns that would hide stains, like the overdyed transitional wool rug that lends warmth to her living room floor. Because the dogs aren’t allowed upstairs, Karu chose to place her silk-blend pieces on the second floor. “They’re the most precious element in my house,” she says. “But they’re one of a kind, and I think when you have one special piece, it really defines the room nicely.”

She also uses this minimalist approach when it comes to hanging art or displaying objects. Karu is “not a knick-knack person,” which means her surfaces are relatively uncluttered, save for a few bold items, like the pop-art-inspired orange planters in her living room. Her walls are adorned with black-and-white photographs and concert posters, including one psychedelic Pixies piece that hangs at the top of the stairs. But amidst all the cool visuals, there’s one work that stands out: above her record player hangs a collage of old checks from Casco Bank, arranged to fade from blue to red.

“When I first purchased the house, I was cleaning out the attic, and I found bags and bags of previously cashed checks from the 1960s and onward,” she says. “I make art of out of everything, and while most of it is total crap, I thought this really worked. It added a personal element to the house.” She points out the various businesses on the checks, from Skillins Greenhouses to Oakhurst Dairy, which tell stories about the house’s former owners and the minutiae that made up their daily lives. Taken together, the checks make for a subtle yet striking tribute to the neighborhood—and the home itself. And even though the collage took days to complete, Karu can’t imagine moving the work from its place of honor. “If I ever sell the house, I will give it to the new owners,” she says. “It belongs here.” 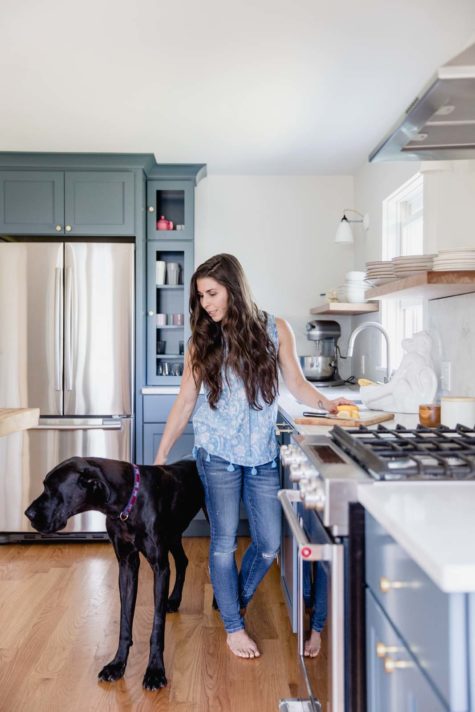 Tyler Karu and her dog Winnie Cooper (named after the character from The Wonder Years) in the kitchen of her recently renovated Cape in Falmouth Flats. 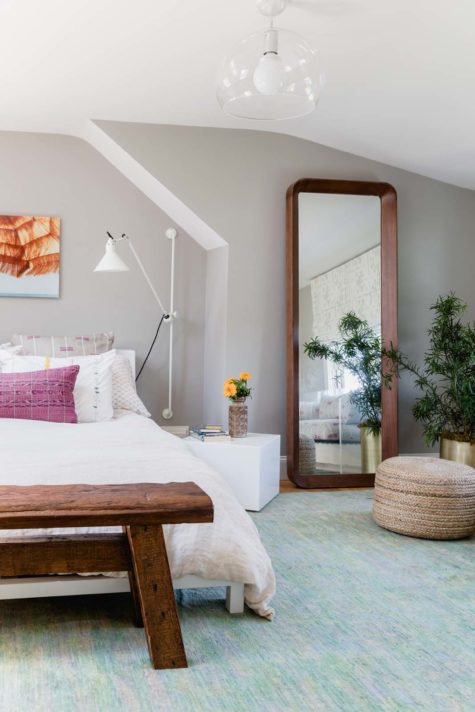 In the guest room upstairs, Karu has placed one of her most prized finds: a transitional silk rug purchased at Marden’s. Textiles, Karu says, can really set the tone for a home.