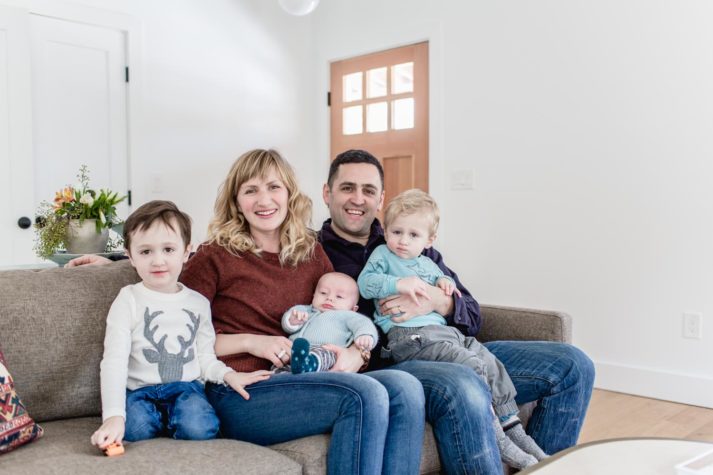 Sydney and Rob Barrett at home in Cape Elizabeth with their three sons, Walter, Thomas, and baby Mac. Rob, who has more than a decade of experience as a builder, built the house from the ground up in collaboration with Sydney who is an artist and designer. 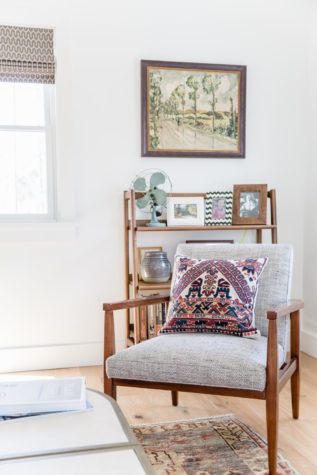 A cozy living room corner features a chair and coffee table from Youngs. A shelf set is filled with family photos and a vintage fan. 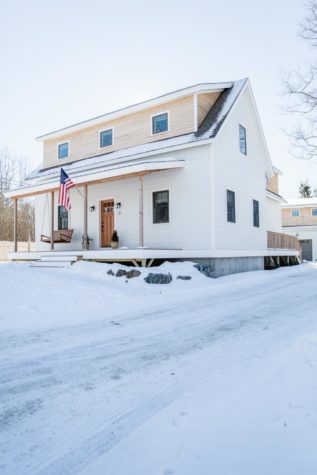 The house has a dormered second floor with three square windows and a traditional covered porch in front with exposed rafters and fir posts. 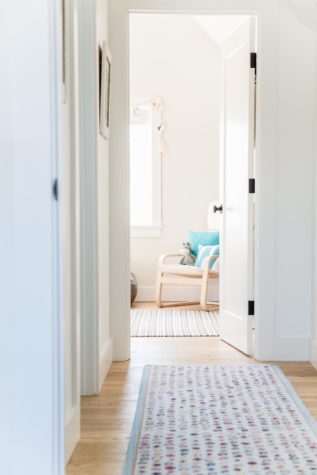 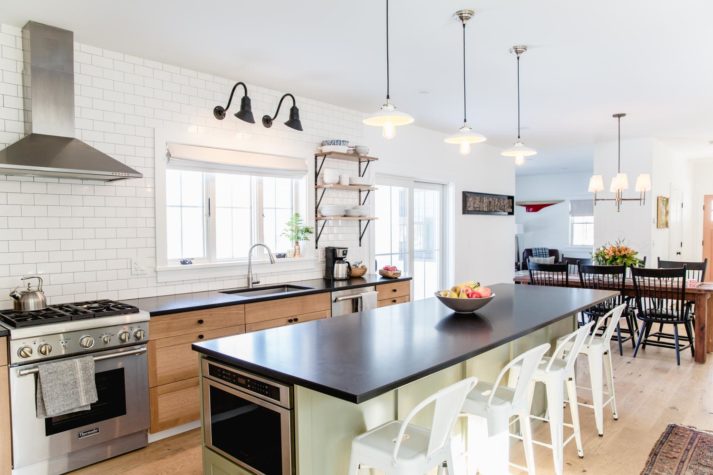 Having the kitchen, dining, and living area open to one another was essential with three kids. “We knew we wanted an open floor plan to be able to see them,” says Sydney. Rob made the dining room table and the open shelving in the kitchen. “It forces us to keep it edited,” says Sydney. 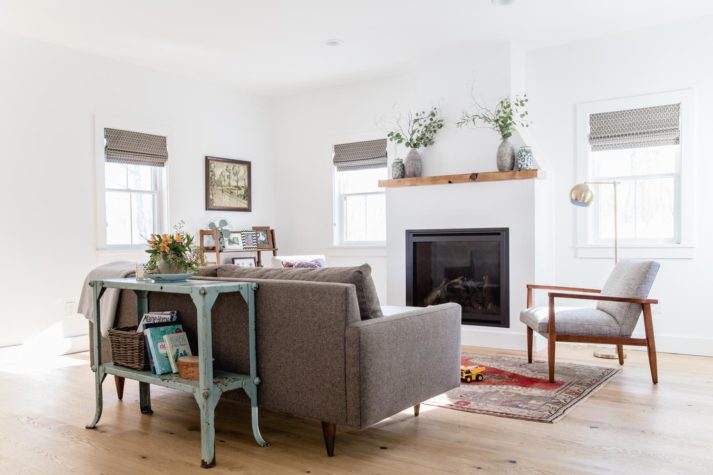 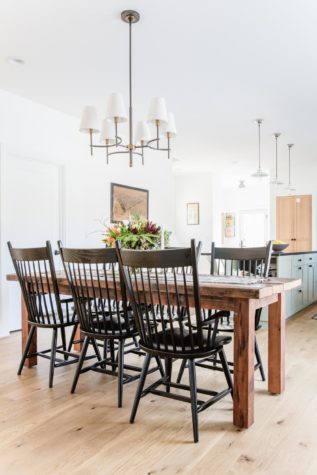 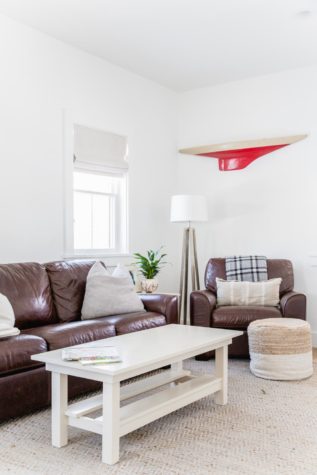 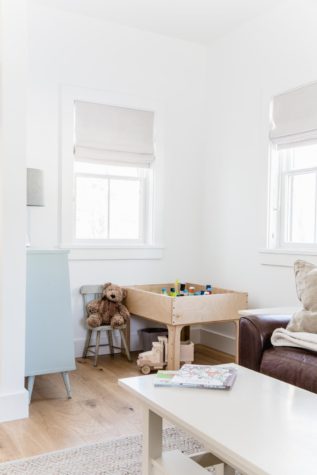 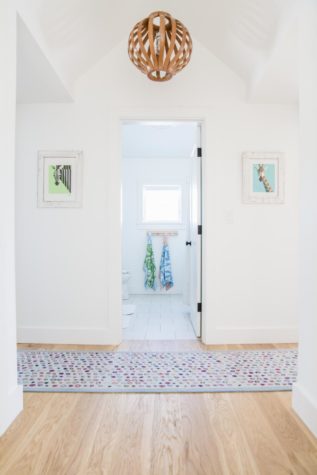 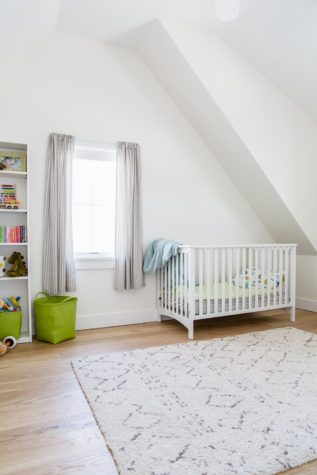 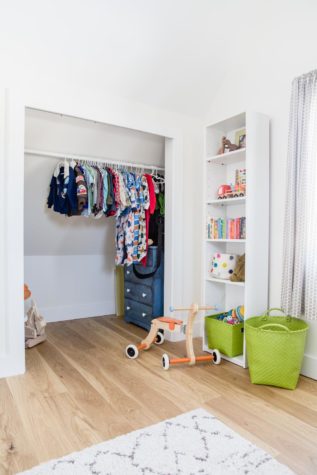 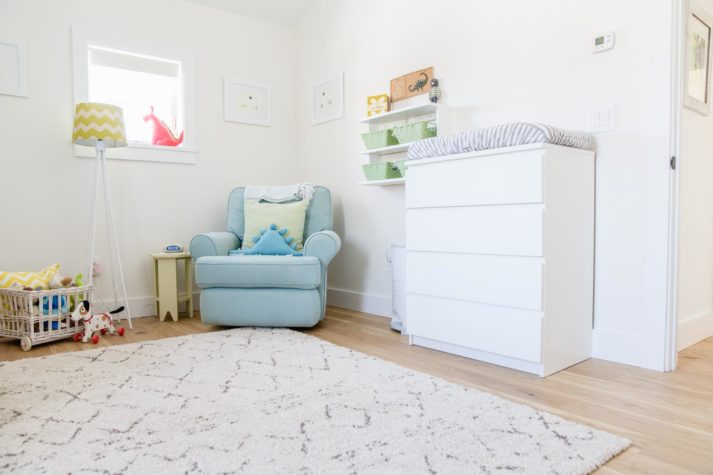 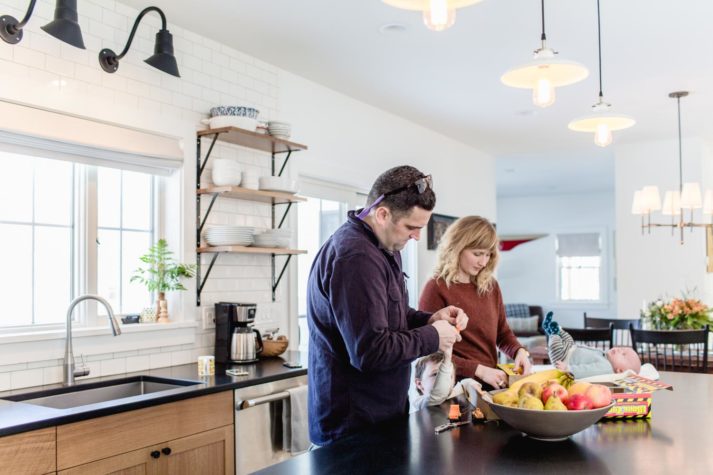 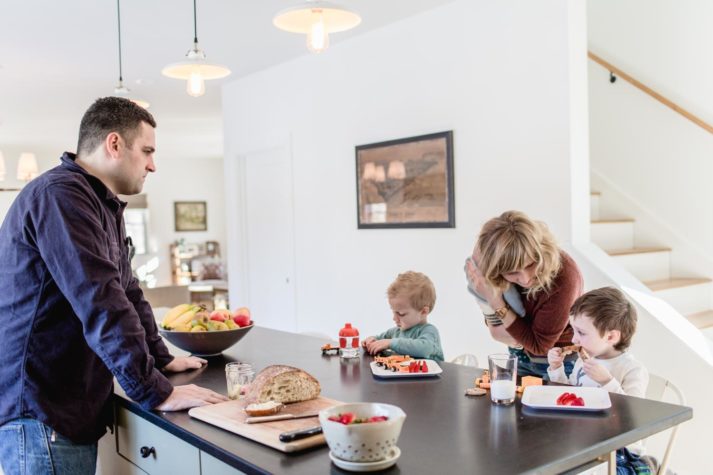 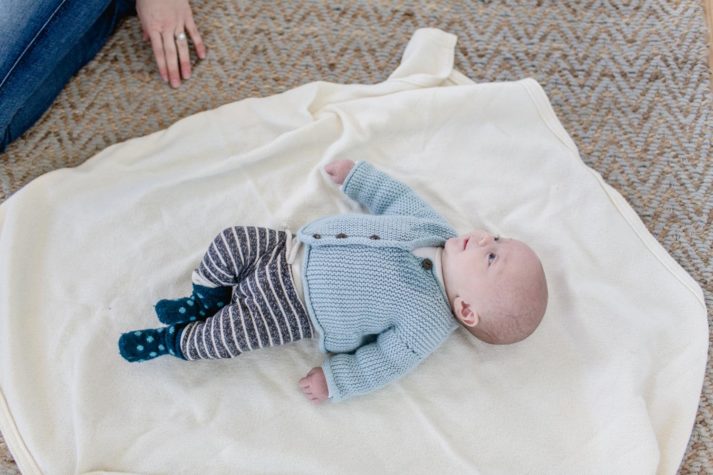 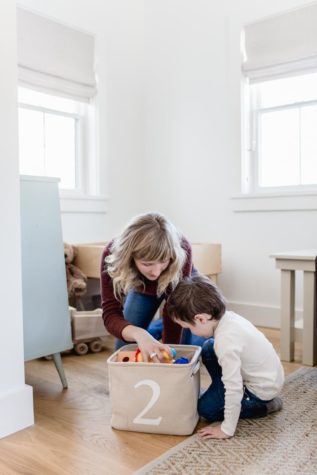 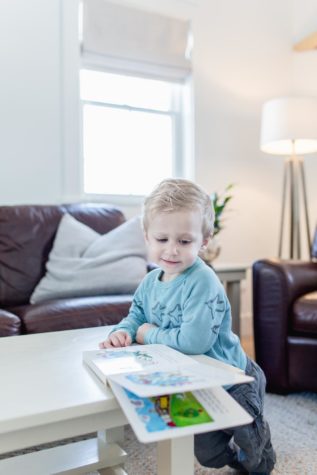 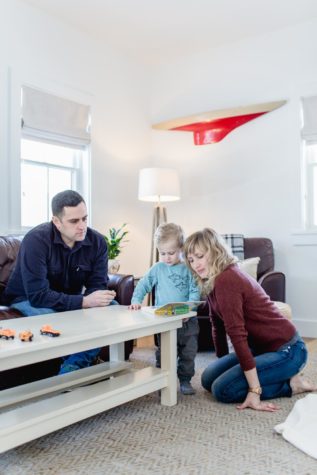 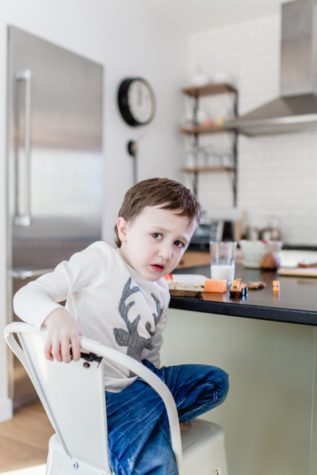 A couple builds a house in Cape Elizabeth for their growing family.

To build your own home is to have an intimate relationship with it, to see it through every stage from foundation to framing to furnishings. You know a house inside and out when you build it with your own two hands; like having x-ray vision, you know what’s inside the walls keeping everything running, you know the guts and bones of the place. A house you build has no secrets or surprises, nothing you haven’t put there yourself.

Rob Barrett has spent the last ten years building spaces for other people. But from late 2014 to mid-2015, with a third son on the way, he built his first house for his family. He would come home from his day job to work on the house he and his wife, Sydney, designed. An artist and designer, Sydney kept a blog of the process. There’s the first post announcing their purchase of the old dilapidated farmhouse in Cape Elizabeth; the realization that they had to raze instead of renovate; the recap of the demolition, when one of their toddler sons cried out, “New house broke!”; Rob laying out two-by-fours to mark where the walls would go. (“They snake around the floor with perfectly straight lines and square corners. It’s like being in a game of Tetris,” Sydney wrote.)

The Barretts each brought a wealth of experience to the project. Rob started his career in residential construction and then managed a division of Wright-Ryan Construction focused on light commercial projects. Within his portfolio is work for the Portland Museum of Art, Maine College of Art, and Diversified Communications. After graduating from University of Southern Maine with an art degree, Sydney worked for David Wood Clothiers and assisted with the store’s window designs. “I always saw myself going in the direction of visual merchandising,” she says. “I also love interior design.”

Nevertheless, anxieties were high. Despite all their accomplishments (and a lot of previous property renovations), this was the first time they were building a house— for their own family—together from the ground up. “If you make a mistake,” says Sydney, “you have to live with it.” Every decision, every wall, every material, every inch had to be chosen carefully. “It’s like anything you do with your partner,” says Sydney. “It’s tough to always see eye to eye. There were a lot of late-night conversations about what we wanted in our house.”

With three boys under the age of five, the Barretts knew the house had to be oriented toward family—both the family that lives under their roof and the ones who would be coming to visit. “When we decided to build with little kids,” says Sydney, “we knew we wanted an open floor plan to be able to see them.” They wanted to see the kids but not their toys, so off the open kitchen, dining, and living area is a tucked-away den where the boys can play and stash away their trucks and blocks. They also wanted ample space to comfortably house visiting family and friends, since Sydney’s family—including her sister, who has two kids—lives down South. A detached garage houses Rob’s shop and a guest apartment above that gives visitors their own private space. And, after years living in buildings that never felt warm enough, they wanted the house to be energy-efficient, super- insulated with radiant floors.

From the street, the house reads like a modest farmhouse: a dormered upstairs with three square windows and a traditional covered porch in front with exposed rafters and fir posts. Off the side, a long narrow deck gets soaked in afternoon sun. “We joke that it’s ‘farmhouse chic,’” says Sydney. “We knew we wanted it to be rustic and feel like a farmhouse that was modern and clean. When we were making decisions about paint and fixtures and style and trim, we always reverted back to that.” On the inside, nine-foot ceilings painted white give the modest-sized house a light, spacious feel. An extra-wide, generous hallway on the second floor also gives the illusion of more space. “We opted to have it feel roomy versus having another bedroom,” says Sydney. (Two of the boys have their own bedrooms and bath at one end of the house—when the youngest is older, two of them will share—and Rob and Sydney’s bedroom with bath is on the other end.)

It’s evident on my visit that Rob and Sydney’s long days and late nights were worth it. The house is beautiful and comfortable in its simplicity, and the open layout allows everyone to be together without necessarily being in the same room. While we chat in the living area in front of the fireplace, the two older boys go back and forth to the den, occasionally bringing me a tiny car or climbing up on the couch to snuggle with their mom and dad. The Barretts have achieved the near-impossible here: having three young children and a stylish, clutter-free home. This was intentional; the couple created spaces for everything they had. “Before we even had a foundation, we knew exactly where the big spoons would go,” says Sydney. “We even have a drawer in the kitchen island with nothing in it.”

For the Barretts, this house is more than a home. It also represents a leap of faith. After the house was complete, Rob left Wright-Ryan to pursue his own commercial and residential construction company, Barrett Made, which he runs out of the newly built shop behind the house. The business is growing fast and serving a wide range of residential and commercial clients, including David Wood, Bissell Brothers Brewing, and Tomaso’s Canteen, to name a few. Eventually, the couple hopes to team up on projects and formally incorporate more design services. “That’s the big picture for Barrett Made,” says Rob, “to transition into offering full design services and consultations—everything from furniture to a whole concept for a house.” “We’ve always been a team,” says Sydney. “I think of something and Rob can build it. We’ve spent a lot of time in his workshop together.”

This partnership is reflected in their daily routine as well—with young children setting the tempo of each day. A typical morning begins with Mac, the baby, waking up first. Next is four-year-old Walter, who climbs into Sydney and Rob’s king-size bed. Two-year-old Thomas is the “late” sleeper. Once everyone is up, they head downstairs for breakfast at the island, the older boys lined up on their stools. “Our last house had a small kitchen that wasn’t open to the rest of the house so we wanted this one to be big enough to gather in,” says Sydney. Rob makes eggs or waffles and after they eat, the kids head to the den for some playtime, often stopping at the window to wave to Rob as he makes his “commute” to his shop in the garage. On a nice day, they might walk to C Salt, the gourmet market up the street, to grab provisions. On a summer weekend, they’ll load everybody up and head to Kettle Cove for a beach day, getting dinner in South Portland at family-friendly Elsmere BBQ and Wood Grill, where “the kids can run around a little bit and drop food on the floor and it’s OK,” according to Sydney.

Now that Rob is working for himself and headquartered just a few steps away, he has greater flexibility and can be around more. The house has given the Barretts
an even bigger gift than that of beautifully designed shelter: the chance to be together during a time of life known for flying by. That just might be the most important foundation they built here. 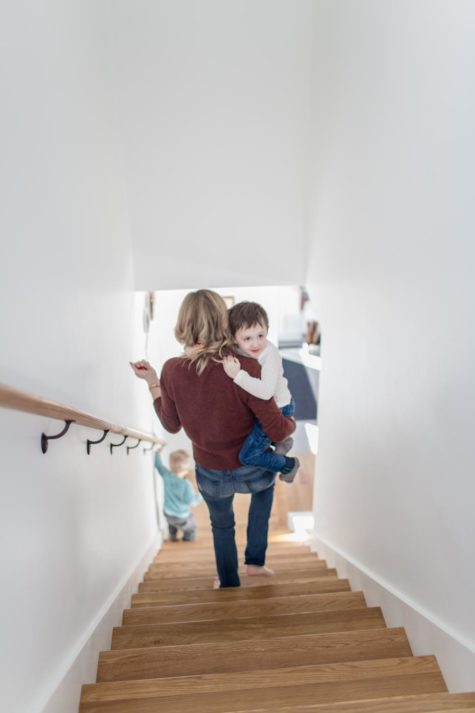 While creating their own space, Sydney and Rob learned a lot of lessons about needs and priorities. “I'm so glad we didn't try to build before we had kids because our needs definitely changed,” say Sydney. 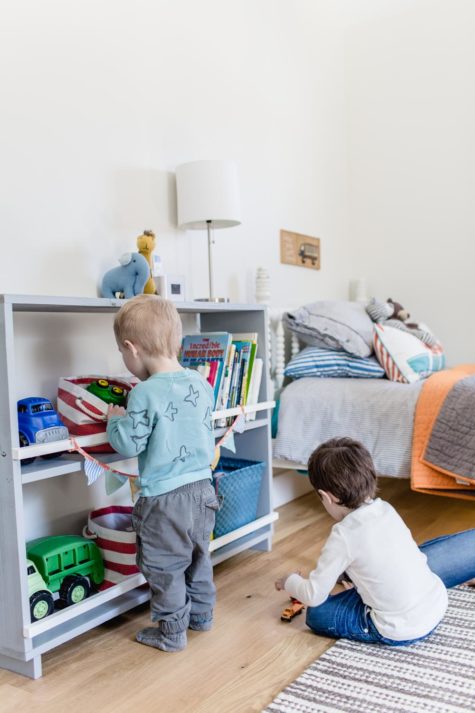 Thomas and Walter play in Walter’s room. Right now, the two have their own bedrooms, but when Mac gets a little older, someone will have to share. 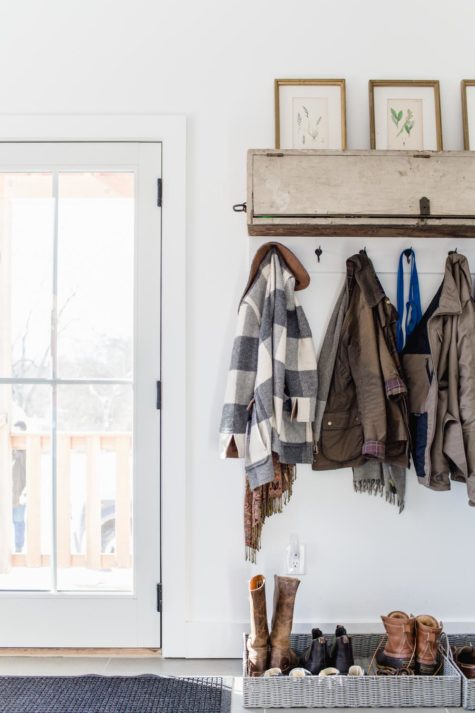 An area adjacent to the back door serves as an open “mud room,” a home for boots and winter coats, and in the summer, sunhats and sandals. 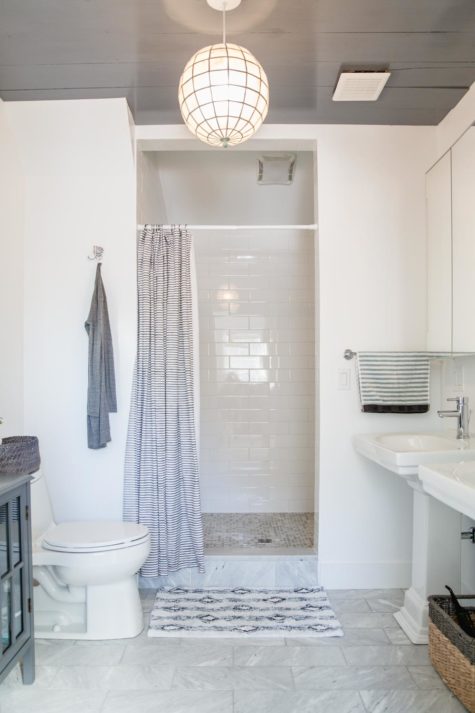 Sydney and Rob’s bathroom is a quiet oasis thanks to a Carrera marble mosaic shower with subway tile, marble flooring, and a nickel-gap painted pine ceiling.