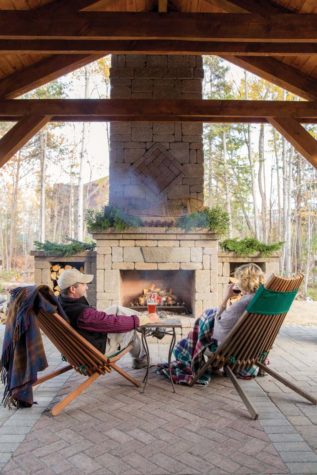 Mark and Venise Fournier enjoy their back patio year-round at their home on Sugarloaf Mountain. Mark, a builder, did all the stonework and hardscaping himself using materials from Gagne and Son. “I designed and built it to be an outdoor room,” says Mark. “It extends our living space in all seasons.” 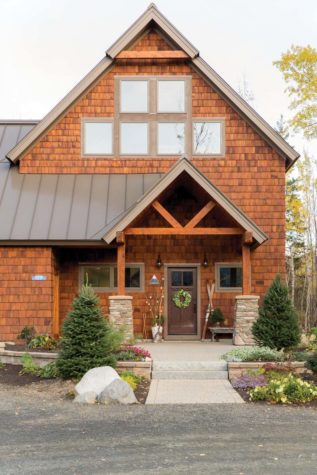 Mark’s company, Fournier Construction, has built several homes in the golf course development at Sugarloaf, including his family’s most recent one. 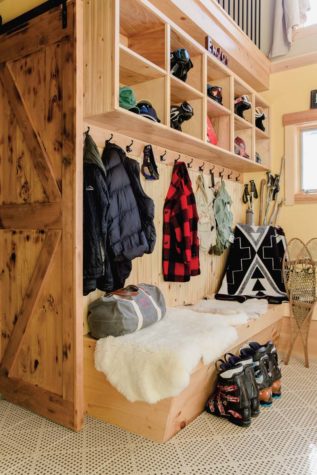 The Fourniers’ mudroom is a testament to all the outdoor activities they enjoy: skiing, biking, fishing, and snowshoeing—just to name a few. 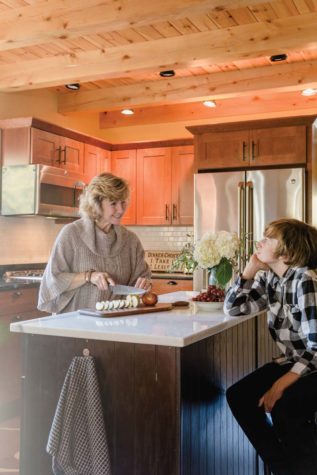 The kitchen, which is open to the living and dining area, features cabinetry by Kitchen Solutions in Auburn. 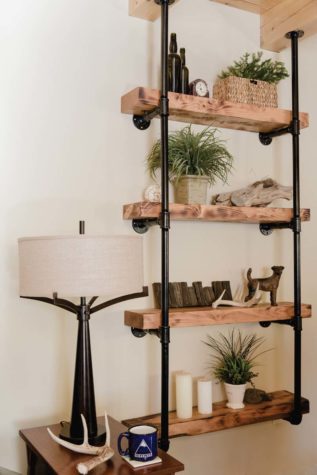 A corner of the living room features a custom-made pipe and wooden shelving system designed and built by Mark. 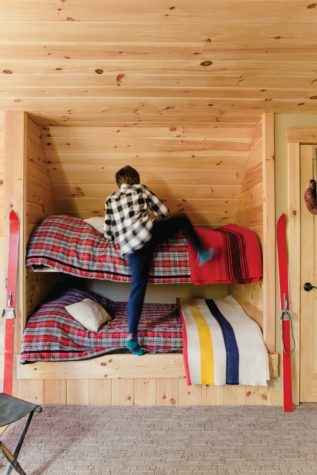 The bunkroom is where Mark and Venise’s college-age kids, Hannah and Noah, stay when they’re home from school. 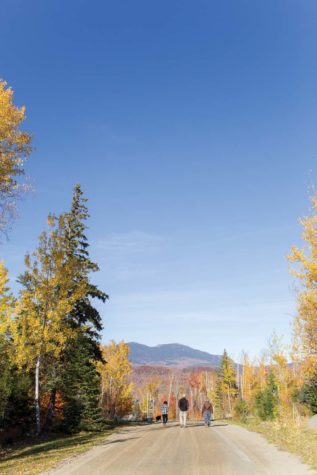 The Fourniers take a walk near their home on the golf course at Sugarloaf, with the Bigelow Mountain range beyond.

After years of taking day trips to Sugarloaf, the Fournier family builds a home on the mountain.

Builder Mark Fournier and his wife, Venise, will be the first to tell you that a builder’s house is never done. They’ll also tell you that the house itself doesn’t matter—as long as the family is together. This current house of theirs, though, in a development along the golf course at Sugarloaf Mountain, is close to finished. A wall of built-ins, a handmade dining table, and a fireplace are still on the to-do list, but the family is moved in and finding the place cozy and comfortable. Most importantly, the house is a long-anticipated year-round home anchoring the couple and their three kids to the Carrabassett Valley, where they’ve been experiencing the great outdoors for decades. “We’re outdoors people,” says Venise. “And we wanted to raise our kids to be outside.”

The Fourniers have designed their lives around the outdoors. For years this meant that every Saturday morning the family would pile into their car to make the trek from their home in Auburn to Sugarloaf. “We’d be up at 6 a.m. to get on the trail by 8 a.m. when it opened,” recalls Venise. “With the price of a pass, we always wanted to make the absolute most of our day and not waste a minute,” says Mark. Inevitably, though, after the kids were all geared up and out on the trails, someone would be hungry or need to use the bathroom. “It actually became kind of stressful to make the trip just for a few runs,” says Venise. When their middle son, Noah, at age eight told them he wanted to attend Carrabassett Valley Academy after enjoying the CVA Freestyle Weekend Program at Sugarloaf, a switch flipped for the Fourniers. “We knew we had to end up here,” says Mark.

A lifetime Loafer, Mark has been skiing at Sugarloaf since high school. After graduating from University of Maine with a major in construction management, he began working for one of the largest heavy construction firms in the Northeast. But when the Fourniers’ first child, Hannah, was born and the company wanted to send him to Massachusetts the following weekend for a job, his priorities became clear. Mark quit to take a local job in Augusta as an estimator and project manager, but before long he grew tired of working in an office rather than out in the field. It was then that Venise and Mark decided to start their own company, Fournier Construction. Venise, a graduate of University of Southern Maine, gave up a budding career with a large retailer in order to raise their children and help out administratively with the company. Over the last 20 years, Mark has kept his operation small so that he can enjoy a flexible schedule that allows him plenty of time with his family. “He’s always been a Little League coach, involved in the kids’ activities, and never missed any of their competitions,” says Venise. “It’s not all kids’ stuff,” Mark notes. “I also get to go fishing when I want to.”

This intention to spend time with family carries into their active lives as well. Venise grew up being a “rink rat,” following her brother’s hockey career all the way to the Junior Olympics. “There were four of us, and we traveled to all his games. It was fun, but he was the only one on the ice,” she says. When she met Mark, the two decided early on that whatever they did, they’d do it together as a family. Mark taught her how to ski (no easy skill to learn as an adult), and they taught each of their three children practically the second they could walk. “Now we’re all on the mountain together doing it, staying true to the commitment we made as a young couple,” says Venise.

After living in Auburn for several years, the couple invested in property on Sugarloaf Mountain, and Mark began building homes there (many of which they lived in for a period of time), including four in the golf course development, where their new house is located. Sugarloaf ’s laidback vibe and welcoming community are a few of the reasons the Fourniers decided to settle here full time. “We’ve skied at a lot of places in Maine over the years,” he says, “but when we would come here, it was different. We all had one thing in common: the mountain, the feeling only it can give you.”

Like most people who live in the Valley year-round, Mark and Venise wear many hats. Mark does everything from drainage, stonework, hardscape, and landscaping to serving as general contractor on bigger projects, like the new Adaptive Outdoor Education Center lodge. In the winter, when construction work is slow, he operates a snowcat on the mountain. Venise, the human resources specialist and bookkeeper at Carrabassett Valley Academy, is also on the boards of the Carrabassett Valley Public Library and the Sugarloaf Mountain Ski Club. “People who live here are very hard working. The waitress who served you last night may also be an ed tech at the local school and in her free time work as an ambassador for the mountain. It’s amazing.”

The resort and town have also invested in making this area a year-round destination, creating a mountain bike trail network as well as a 20,000-square-foot Anti-Gravity Complex with a climbing wall, trampolines, and an indoor skate park. And the Outpost, located in Sugarloaf ’s Village, offers ziplining, Segway tours, chairlift rides, and paddleboard, canoe, and kayak rentals. “It used to be that everybody boarded up their homes in the spring and they’d let their lawns grow all summer long and you wouldn’t see them until Homecoming in October. But that’s really changed since we’ve been up here,” says Mark.

With their kids mostly grown now—Hannah, 22, attends Husson University in Bangor for occupational therapy; Noah, 20, is a sophomore at University of Maine studying mechanical engineering; and Elijah, 13, is in seventh grade at Stratton School in Eustis, where he is on the soccer, baseball, basketball, and ski teams—Mark and Venise enjoy having a place everyone can return to. “Our dream is that they’ll come home here with their own kids someday,” says Venise.

These days, Mark and Venise still love to downhill ski but find themselves spending more time on the Narrow Gauge and Outdoor Center trails hiking with their two dogs, Bo and Otis. In the winter, when it gets dark early, they strap on their headlamps and do the trails on snowshoes or cross-country skis (Mark has recently started skinning— sticking synthetic skins to the bottom of skis and climbing up ski trails—as well). “To live up here and not go outside and be active would be hard,” says Mark. “It’s so in-your-face.”

In Venise and Mark’s faces is the glow of people in tune with their bodies, who are active under the sun, in the wind, on the snow, who know the high of fresh air filling lungs and blood pumping. There’s a joy about them—a lightness of spirit—that could just be the best motivation to get outside you’ll ever find. That’s because to the Fourniers, being outdoors is not something they do, it’s something they are. Together. 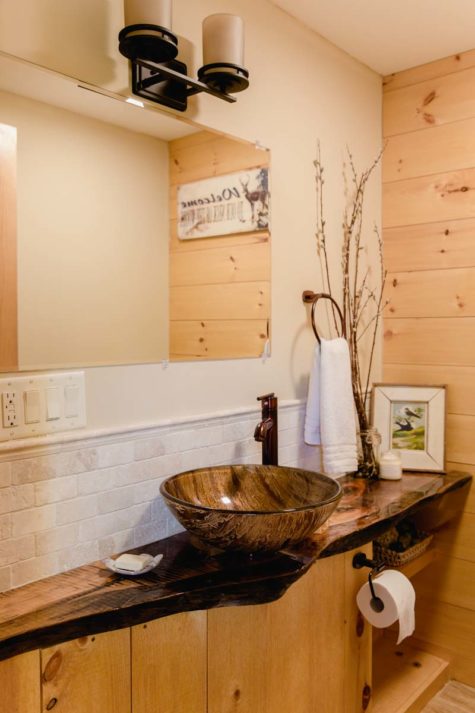 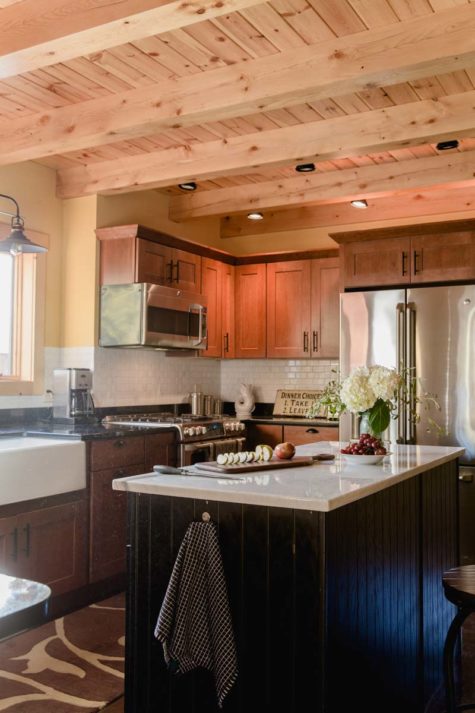 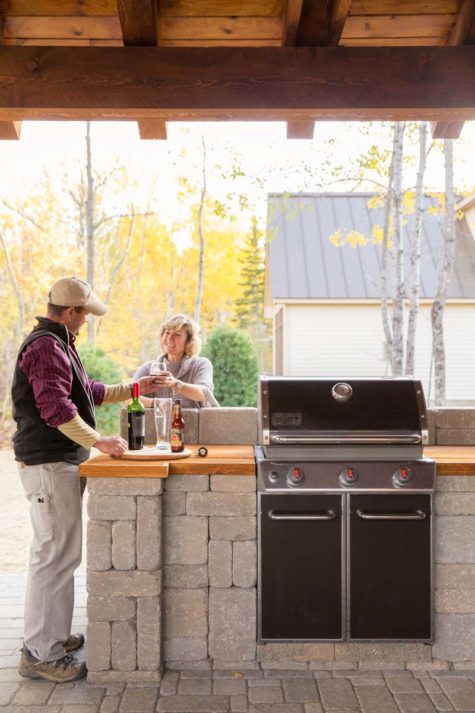