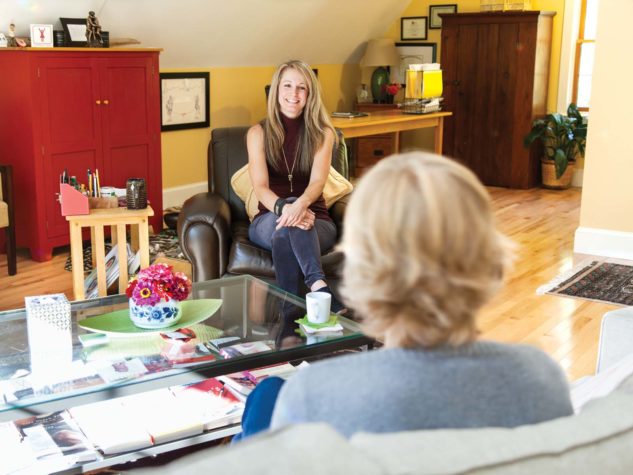 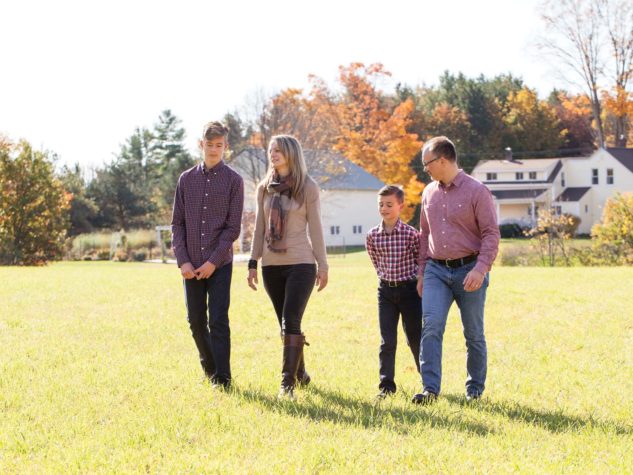 Sex therapist Jennifer Wiessner takes a walk with her husband, Greg, and sons Keji and Breton. 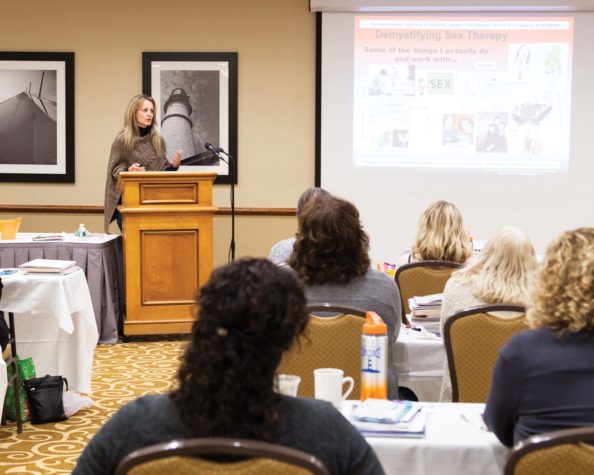 Wiessner gives a talk called “How Oncology Nursues Can Support the Sexual Health of Those They Serve” at the Annual Oncology Nursing Society Conference last October. 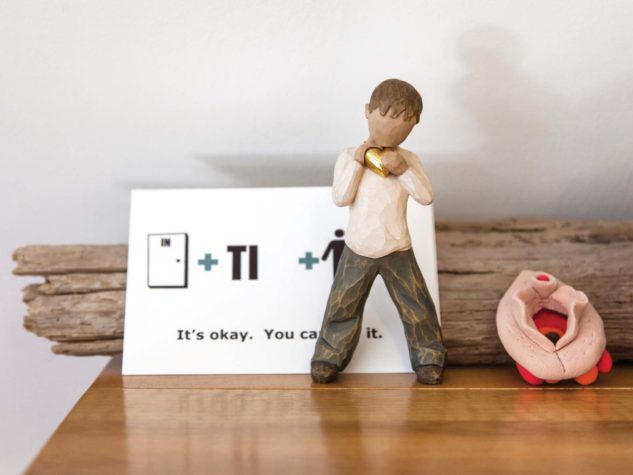 Wiessner’s home office is filled with objects that reinforce positive messaging. The clay model of a vulva with internal clitoris was made by the teenage daughter of a friend

Sex therapist Jennifer Wiessner is on a mission to educate a generation of Maine families about how to have conversations about sexual well-being, permission, and pleasure.

It’s an early fall evening in Cumberland as cars pull up outside a large house in the woods. One by one, women get out, walk around the side of the building, and step through a glass door into a kitchen. Met with wine and canapés, the community of mothers from the neighborhood prepares to discuss how they can have conversations with their families about healthy sexuality. I circulate among them, the only non-parent in the room, and take my place at the back of the living room as the final neighbors appear and slide into seats on the sofas.

This is a “Raising Sexually Healthy Children” workshop run by the Maine-based sex therapist Jennifer Wiessner. Her workshops bring current developmental information, statistics, and community knowledge about sex education into the living rooms of communities from Scarborough to Blue Hill. Parents (usually the mothers) come to Wiessner to learn about how they can have less awkward, and more productive, conversations with their kids about sex, bodies, and relationships.

“Providing healthy sexual information is not robbing your child of their innocence, nor does it encourage them to engage in sexual behavior earlier,” Wiessner assures the eight mothers who have gathered tonight. Her workshops are for parents of children aged birth to 14 years old, and tonight’s parents have kids in the range of four to ten years old. “Comprehensive sexuality education has been widely researched,” she continues. “And it’s proven to help children wait longer to have sex and become more responsible.”

She says her mission tonight is to establish parents as “the number one source of credible information about sex for their kids.” According to a British survey, 44 percent of the teenagers studied did not trust the sex advice they received from friends, and 75 percent wished they could talk more easily with their parents about sex. “Be an ‘askable’ parent,” Wiessner encourages them. “Sexual curiosity is normal, and answering your own children’s questions positively—regardless of what they ask you—positions you as a trusted source of information.”

With a PowerPoint presentation, Wiessner launches into a three-hour odyssey of information. She references books by authors such as Robie H. Harris and Dr. Dan Siegel, and gives us copious handouts, including scripts on how to answer questions and respond to children in uncomfortable situations.

She asks the room, “If your five-year-old son is touching himself in the dining room, what would you say?”

“Stop touching it!” cries someone on the sofa.

“No,” Wiessner says. “Don’t shame him—it’ll stay with him. What’s needed are healthy boundaries. You can say something like, ‘I see your hands are in your underpants. I know that it feels good to touch your penis, but that is something you can do in the bedroom or bathroom.’”

“We live in a sex-saturated, sex-silent culture,” she later tells me. “And that’s extremely difficult for children and adolescents to understand. When we shut down their very natural questions about sex through our own awkwardness, we are pathologizing their curiosity.”

Two weeks later, I meet Wiessner in her home office in Cumberland. It’s a radiant, light-filled space, and a small forest of orchids lines the window. The orchids, she tells me, are a subtle celebration of female anatomy and serve as a useful metaphor for couples in long-term sexual relationships; even when the flowers appear to have died, with the right amount of nurturing, they can flower again.

I tell her how inspiring her workshop was— far from being awkward, it was clearly an empowering and uplifting experience for the parents. “So much of our sex education is fear-based, risk-based, and danger-based,” she says, nodding. “When I started this, I made a very conscious decision: I want this to be sex-positive and health-focused. Just as we have physical and emotional wellbeing, this is about sexual well-being.”

While Wiessner is devoted to sexual health, she has had to deal with a lifetime of illness. Born in New Jersey as the youngest of seven children, she attended Catholic school for 12 years (“In no way was becoming a sex therapist a rebellion,” she assures me). In her teenage years, she caught Lyme disease—although it went undiagnosed for 25 years—which led to countless surgeries and illnesses. She trained as a licensed clinical social worker; then, in 2005, she and her husband discovered she was pregnant after extensive IVF treatment, and moved to Maine.

It was here in Maine that she had an epiphany. She was invited to a workshop about the intersection of spirituality and sexuality led by renowned sex therapist Gina Ogden. “I’m just blown away at the workshop,” remembers Wiessner. “I don’t know what’s happening; I think I’m getting sick because I’m sweating and feeling ill in my stomach, but I’m raising my hand for anything that she needs an example for. Something was happening—and I didn’t understand it—but I knew I was in love with everything she was saying.” Later that day, one of the participants introduced himself as Ron Feintech, who was, at the time, the only certified sex therapist in the state of Maine.  “He said to me, ‘I am 67 years old. Some day, I’ll retire, and all my knowledge will go with me. Why don’t you take over for me?’”

She took on that challenge. By 2012, she was certified as a sex therapist with the American Association of Sexuality Educators, Counselors, and Therapists (AASECT) and had launched her own practice. The idea for the workshops was born after several years of clients sitting on her sofa and working through the issues that were impacting their sex lives—principally shame. “I thought to myself, if we start raising children who are educated by their parents about their bodies, consent, permission, and pleasure, we could raise a whole generation of children who don’t need to live with shame about their bodies.”

She started offering free workshops from her home practice, and by May 2015 she had built a curriculum and begun to charge for the workshops. She also began to venture out into communities, bringing “village-style” workshops into people’s living rooms and targeting their local networks of friends and neighbors. Already in the first year, the courses were full, with an overflowing waitlist. By the summer of 2017, she was holding up to four workshops per month and more than 500 people had gone through the program.

When Wiessner isn’t educating parents in communities all around the state, she works as a couples therapist and has become an educational force within the wider Maine health community. She holds workshops for medical communities such as oncology workers, helping bring conversations about sexuality into patient care. She tells me about a recent presentation she did for the Southern Maine Oncology Nursing Society. “I talked about how critically important it is that members of the oncology profession talk to their patients about sexuality, because when they don’t, they’re saying it’s irrelevant to their treatment,” she says. “If you have a cancer patient who is going to have treatment, regardless of what body part, whether it’s their medication, radiation, chemotherapy, or just  their fatigue, it will affect their sexual function, arousal, thoughts, and well-being. It’s important for the oncology profession to create a space of permission to ask questions, offer resources and books, and have assessments.”

She’s also become focused on empowering women to “own their yes.” Last year she co-created with Kristin Areglado Hurley the event Girls on Fire at the University of Southern Maine (USM), designed for high-school girls aged 14 to 17. She offered a talk called “The Anatomy of Pleasure” with Carrie Levine, a certified nurse and midwife. It was inspired by Joyce McFadden’s critically acclaimed book, Your Daughter’s Bedroom: Insights for Raising Confident Women, and focused on a strange silence that is associated with the female body in our culture. It’s a point that came up during the workshop when Wiessner mentioned that of all the childhood sex education books on the market, only one book mentions the word “clitoris” (Bellybuttons are Navels by Mark Schoen).

During the talk at USM, she showed the girls an illustration of the female pelvis and asked them to name all the parts. “They went to town really quick on the internal organs,” says Wiessner. “But when it came to the external organs, they weren’t sure. I said, ‘Notice what just happened?’ The girls said, ‘Well, they really don’t teach us that.’” They didn’t have the language for their own bodies—and the parts that are associated with pleasure. Wiessner believes that the strong, empowered image of women that is becoming normalized in the media is not reflected in women’s sex lives. “When we don’t teach girls about their genitals, their pleasure, and their role in a partnered sexual relationship, it’s completely unrealistic for us to believe that they will know then how to be empowered in a partnered experience,” she says.

“It’s critically important that women can get to a point where they own their yes. But they can’t do that until we as parents give them that information, support, and healthy role modeling, meaning being open to talking about these topics. Until then, we continue to treat female adolescent sexuality as a complication, versus a natural rite of passage.”

Wiessner feels that it is her mission to keep spreading these positive messages from the ground up, via workshops that bring conversations about sexual well-being to more and more families. “I want to reduce the shame in Maine,” she tells me with a smile. “I’m the one with the boots on the ground, getting the parents to see the wisdom in this. Our kids are so much more open to this than we are. We can aid our kids with healthy talk, factual and developmentally correct resources, and being an ‘askable’ parent, no matter what they ask.”