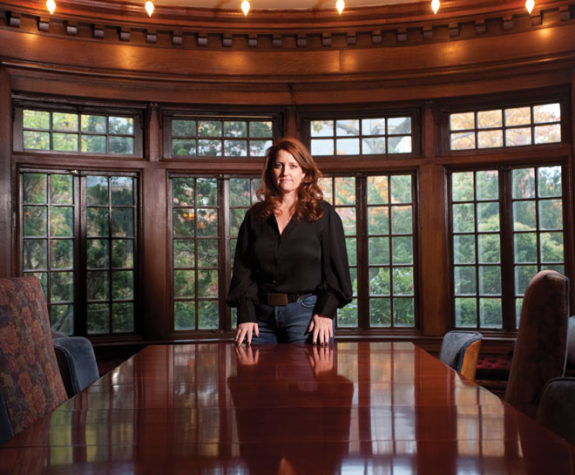 Kim Swan, head of The Swan Agency stands inside one of her projects: a private home shes listing at 233 Western Promenade, Portland. 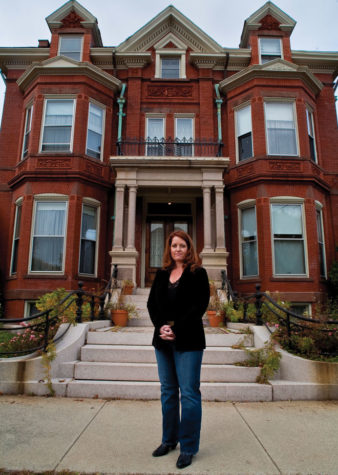 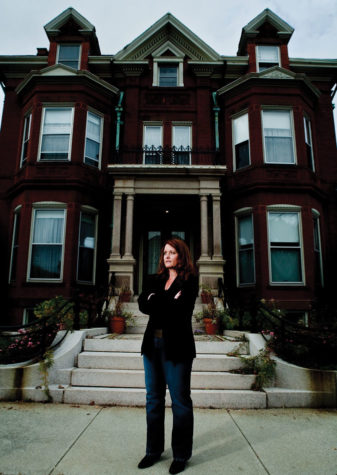 Ask Kim Swan what she does for a living and she’ll say, “real estate.” Which is true, except that Swan may have the most expansive definition of “real estate” in the business.

In 1987, with just three years of full-time experience, Swan purchased and redesigned a small $30,000 gardener’s cottage and sold it for $76,000. Eventually she began taking on larger projects, like inns, which led her to open art galleries, design events with top chefs, educate innkeepers, start a party-planning company, invest in country music publishing, and—in the works now—create a TV show. However, those are just a sample of her side projects. Her primary focus remains The Swan Agency Sotheby’s International Realty, a brokerage firm that represents buyers and sellers of modest to multimillion- dollar homes and inns from Kittery to Eastport.

In 1986, at the age of 24, Swan invented the term “Inn/B&B Specialist” and set out to live up to the title. Twenty-three years later, she’s standing in the doorway of The Danforth, Portland’s grande dame of inns and her latest project.

“This was all Pepto-Bismol pink,” she says. Now the room gleams as light plays off of the polished dark-wood floors, bright white walls, and decidedly not-pink furniture. Wherever there’s a niche, it’s filled with art. With The Danforth, as with previous properties, Swan is the buyer, developer, designer, event planner, and marketing mastermind. “I never really see how it’s all going to happen, but it always does,” she says.

Swan talks about the curios in the sitting room: the collection of croquet trophies on the mantle, a signed picture of Jackie O. and another of Princess Grace that sits on the piano. Everything is a concatenation, one story leading into another—from debutants and fashion models of the sixties to the amazing clients who passed on these treasures when Swan walked into a room at the right time. Swan’s stories are full of verve, connections, coincidences, and luck. She speaks in the royal “we.”

If you’ve read Malcolm Gladwell’s The Tipping Point, then you’ll recognize Swan’s archetype. She’s the consummate “Connector.” She makes things happen by knowing a lot of people who do very different things and bringing them together. Like a Kevin Bacon of Maine real estate, Swan seems to know everyone and have been everywhere. What’s more exciting: she has people she wants you to meet. Shuttling between Portland and her hometown of Bar Harbor, Swan covers a lot of ground, but the secret to her varied success is that her desire to help people comes from genuine enthusiasm.

“I have to have a project, I have to have a carrot, all the time,” she says. Five years ago, an artist friend asked for Swan’s advice on where to hang his work in Bar Harbor. Her response? “I’ll start a gallery.”

The more you talk with Swan, the more you understand how business ventures that can seem disparate enhance each other. When Swan started Cygnet Gallery, her real estate offices (which became affiliated with Sotheby’s in 2006) in Blue Hill and Northeast Harbor lent themselves well to gallery space. (Cygnet now has a Portland presence as well.) It was an added bonus that people associate art with Sotheby’s. The art Swan collects sets the tone in her inns. And the more she reworks inns, the more she sees them as venues for everything from weddings to charity fundraisers to cutting-edge culinary events, tweet-ups, and living classrooms for innkeepers. A large part of Swan’s work in the B&B market has been in education, and she is not proprietary about what she has learned. She’s currently pitching a television show about the inn business—focusing on breakfast—to the Travel and Discovery channels.

Swan’s vision is as acute in the big picture (such as choosing a promising property like the Brunswick Inn on Park Row for rehabilitation) as it is in the small details (she is adamant that tip envelopes in guest rooms should always lay flat, never propped up; having them at all is striking a balance between the dual roles of owner and employer). Swan often mentions that she’s a Gemini.

She also catches herself on her use of the royal “we.” “I always say ‘we’ because there is always someone else involved—it’s more fun that way.” One of those people is her ex-husband, who still serves as her right-hand man in property management. Another is her friend Beth Oliver, who once called Swan saying, “I’m going to have to fake my way through everything!” when she was assigned to the NASCAR and country music accounts while doing advertising for Chevy. Swan said, “Sweetheart, I’m your Cyrano De Bergerac.” Many NASCARs, Country Music Awards shows, and one up-close encounter with Toby Keith later, Kim has now cofounded Maineville Publishing in Nashville with country music star and singer/songwriter Aaron Benward. Music and entertainment tie in with Pomegranate Parties, her event planning company.

“I’m always looking for a way to marry all of the businesses because I don’t want things to seem too fractured.” That is a slightly self-conscious counterweight to Gladwell’s take: “The point about the Connectors is that by having a foot in so many different worlds, they have the effect of bringing them all together.”

You can see Swan’s businesses as a growing media company that has properties and knows how to sell them.

Or you can see it as a real estate empire with someone at the helm who knows how to live. As Swan says, “I work hard, but it’s hardly work.”