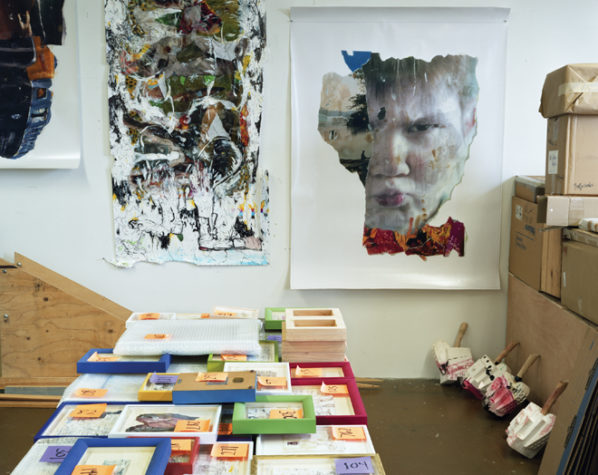 Artist William Pope.L is a performance artist best known for his series of crawls, the most ambitious being The Great White Way, a five-year project in which he crawled on his hands and knees from the Statue of Liberty to the Bronx. His multidisciplinary art practice often challenges and confronts constructions of race. He has lived in Lewiston for the last 18 years and teaches at Bates College.

The artist’s studio is on the third floor of the old Edward Little High School in Auburn. Student artwork remains painted on the drop-ceiling tiles, but the blackboards have been erased and scrawled with notes for Pope.L’s ongoing, unfettered, ever-enlarging projects.

This uncharacteristically structured series, Failure Drawings, has been displayed on museum walls and as a table piece. “I’m always trying to find a way to show the process. The way they are laid out—that’s what one does when installing drawings. You just don’t stack them as high. You don’t go to such extremes.” But he does. Extreme is his medium.

These porous white popsicles, or plaster hatchets, were part of an installation and performance, Corbus Pops, at the Carpenter Center for the Visual Arts in Cambridge, Massachusetts, which confronted the Le Corbusier–designed center and “modernism, utopia, nonsense, blackness, purity, and factory production.”

Pope.L makes collages from torn-up glossy magazines, prints them, and then paints on the photos—creating a mix of brown, white, and yellow body parts. “It’s like voodoo practice. The idea in magic is to take a very small source material—one part pepper seeds and two parts spit—to produce a catastrophic reaction in someone’s body. The inversion of scale and magic is similar to digitizing an image. Your hope in miniaturizing something is to increase its effect in the world.”

Boxes line the studio—packed up for various gallery and museum shows around the world. He’s shown at the Museum of Contemporary Art, Los Angeles, the Whitney Biennial, Art Basel Miami, and the Portland Museum of Art. He currently has a show at 37A in Portland.