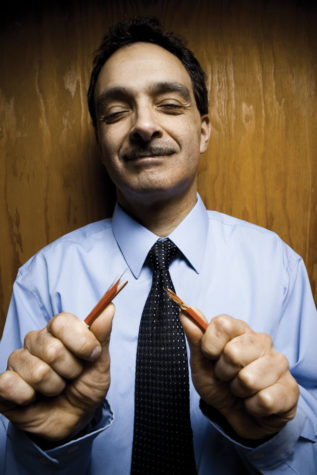 Demonstrating the breaking point of a pencil. 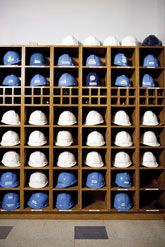 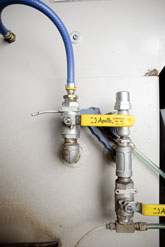 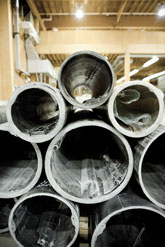 Assembled carbon-fiber tubes that are part of the Bridge in a Backpack. 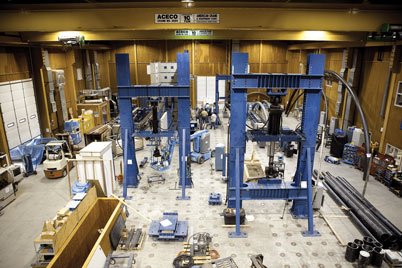 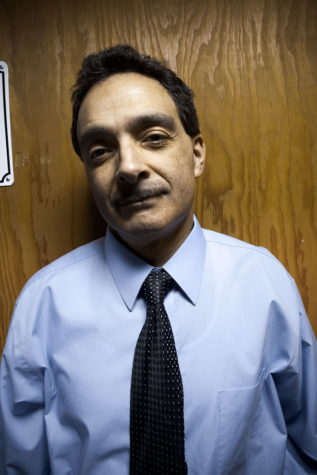 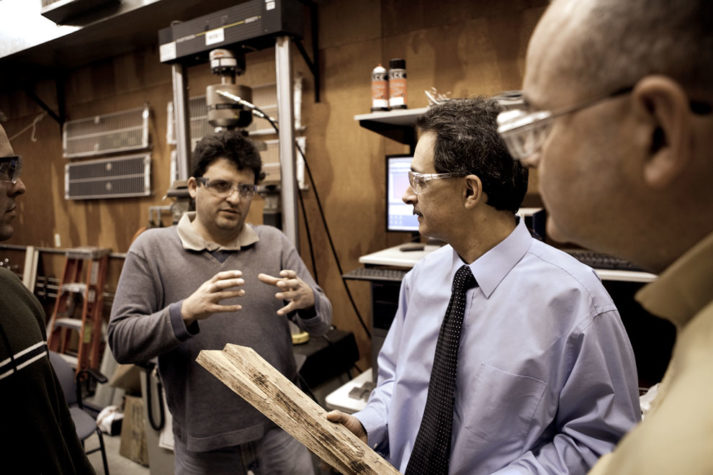 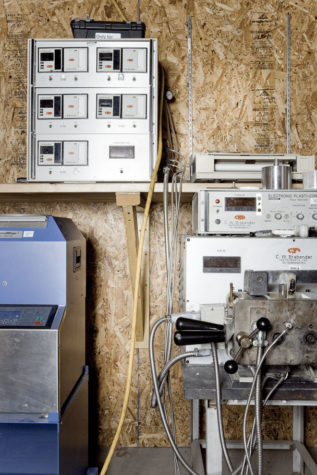 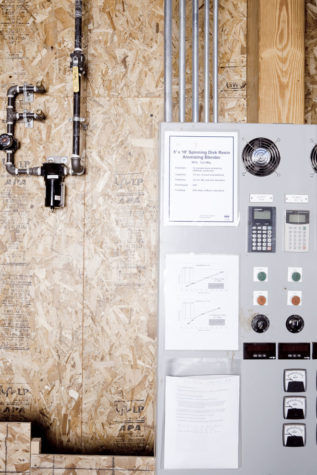 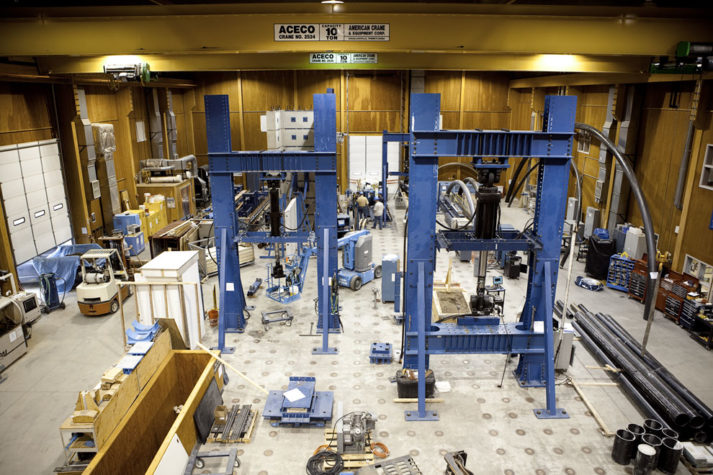 Actuators on the main lab floor can simulate earthquakes and windstorms to test composite material. 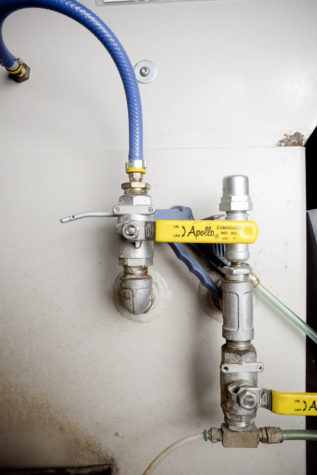 Controls for a steel-cutting machine in one of the centers ten labs. 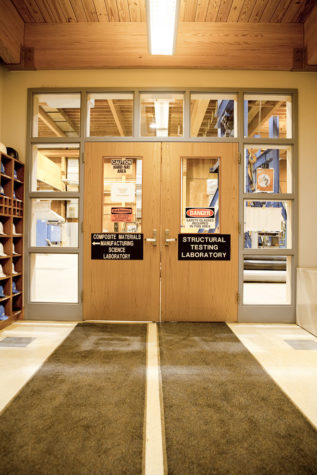 PROFILE-April 2010
By Peter A. Smith
Photographs by Jarrod McCabe

Habib Dagher came to the University of Maine at Orono in 1986 and has been instrumental in building the national reputation of the Maine Advanced Structures and Composite Center, a 70,000-square-foot- laboratory that develops, tests, and crafts quality hybrid composite materials.

The center has successfully developed prototype composite hulls for Navy Seal boats with Hodgdon Yachts, created a tent with lightweight panels that can withstand mortar blasts, and produced a portable, ultra-lightweight bridge made from plastic tubes that can be fit inside a couple Black Bears duffel bags and transported just about anywhere.

Last year, the composite center received $12.4 million to build a 30,000-square-foot addition for designing and testing both the structural elements and nanocomponents for the offshore wind energy industry.

Dagher works in an office filled with material samples, bound copies of PowerPoint presentations, and scale-model prototypes. But he does not work alone, and he firmly believes in the motto hanging over the entrance to his laboratory: “No one is smarter than all of us.”

M: Why is there a need for offshore wind power?

HD: The biggest issue that Maine is facing, and many other countries are facing, is the potential cost of fossil fuels as we go into the future. If you recall what happened back in July of 2008 when energy prices hit a high, we were paying $4 to $4.50 a gallon in gasoline cost and heating oil costs. We ran some numbers at the time and found that, if those numbers held for close to a year, the average Maine family would have spent 25 percent of its income on energy. In 1998, the average family spent less than 5 percent of its income on energy.

So, the big issue is cost. The other issue is job creation. President Obama said in his State of the Union address, “The country that will lead the renewable energy revolution is going to lead the world economy.”

M: Where does Maine fit into all of this?

HD: A lot of people have called the Gulf of Maine “the Saudi Arabia of wind.” We just didn’t wake up one morning and decide offshore wind is the way to go. As a university, we studied all renewable energy opportunities and all energy opportunities the state of Maine has, looking at everything you can think of.

M: How much potential energy is out there?

The governor has been working with us on this plan, and he’s announced that the goal is five gigawatts of offshore wind by 2030. A gigawatt is a nuclear-power-plant size. It’s an 8-mile by 8-mile area. So, we’re developing designs for floating offshore wind turbines. We’ve made a decision to go 20 miles offshore because the winds are much better.

M: And because nobody wants to look at a power plant in their backyard?

HD: That’s another reason, certainly. Some of us don’t like to look at wind turbines, and I respect that. By going 20 miles offshore, we are going beyond the horizon. Nobody sees them. Nobody hears them, so it’s a different philosophy than what’s been employed in Cape Wind in Massachusetts.

M: What is the composite center doing to capture this potential energy?

HD: The Department of Energy selected us as the offshore research center for the country—from 42 proposals from across the country to develop wind energy and help the country meet its  goal of 20 percent wind by 2030. So, we’re very excited about that.

M: But you’re not going to be actually building the turbines here.

HD: We’re going to build the prototypes and test them before we get them in the water. It’s very expensive to go out there and stick stuff in the water and find out if it works or if it doesn’t.

Our plan is by the end of next year to have our first floating wind turbine in the Gulf of Maine that’s going to be placed in the Monhegan Island Test Site. It’s about 2 to 3 miles from Monhegan, but that’s just a test site, which means we’re going to go out there working with the people in Monhegan and put test turbines in there. We’re going to put them in there for a few months and take them out, just to test out the technologies and make sure it really works. This is just testing. Think of it as a tech park for testing.

M: What’s the center’s track record for developing other things in the lab and then getting them into commercial production?

HD: There’s a lot. The most recent project we spun off is called the Bridge in a Backpack technology. That is an inflatable composite bridge that comes out of a bag. You inflate it on site, shape to any geometry you want on site, and within three hours it becomes harder than steel. You fill it full of concrete, and you can build this bridge within a couple of weeks. That technology is already a business operating in Maine, building bridges, and then designing them across the country and shipping them across the country.

When I told people about the Bridge in a Backpack eight years ago, people thought, “Professor Dagher really has some issues.” Today, we have a business that’s running. And the technology is being used all over the world.

M: I think of engineers as being very technically oriented and specialized in a way that’s in-accessible to the general public. It seems like you’ve taken on a role as public ambassador. Why?

HD: We, at the University of Maine, want to be relevant to the world around us. I started working on engineering problems and doing integrals and solutions and formulas and so
forth, but the world is a lot bigger than that. So, we assembled this team that has 140 people today that’s working on solving a lot of the world’s problems. It’s energy problems.
It’s construction problems. It’s infrastructure problems. We’re blessed to be in an environment where we can make a difference.

M: Not everyone is gung ho about wind power. Isn’t there significant energy required to manufacture these turbines, put them out into the ocean, and moor them—plus all the energy lost in transmitting electricity from offshore?

HD: All of those are questions that have already been answered. Europe is 10 to 15 years ahead of us in doing this work. It works very well. There are close to thirty offshore firms in Europe right now that are either constructed or under construction plan today. In most cases, when people want you to envision the future, they have a hard time because the future doesn’t exist yet. In this case, I’m not asking you to look into the future. I’m just getting you to look across the Atlantic.

M: What you’re saying is that offshore wind power is not a reality here because, while it’s technically possible, it’s not an economic necessity. Oil just isn’t expensive enough.

HD: Right, but we can’t wait until we have $10 a gallon to start thinking about it.

M: Your job is to plan ten years out or thirty years out?

Fifty-five million people live in an area less than the state of Texas in the northeastern United States. These 55 million people pay the highest electricity costs in North America, and we have 149 nuclear power plants worth of wind sitting off the coast of Maine. Five years from now these folks are going to require renewable energy because energy prices are going to go up.

If we’re ready, the state would be ideally positioned to be part of the renewable energy solution for the whole northeastern United States. Maine will be exporting clean electrons and creating jobs. We’ve been in the business of selling natural resources ever since the state got started, right? We sold our wood. We sold our energy and water, and now we’re selling clean electrons. That’s the idea.

M: You sound so confident. What are the hurdles?

HD: There are pitfalls in anything that you do. There’s design issues: how to design something that’s cost effective. How is it going to survive the environment out there 20 miles offshore? What happens when the next hurricane comes in? What impact is it going to have on the fish and the birds and the whales and the mammals and the water? These are all critical questions, but we’ve assembled the top experts in the country and in the state of Maine to help work with us to answer those questions. You know, the motto on our door is: “No one is smarter than all of us.”

We’ve put together a team of over sixty scientists and engineers. The governor’s behind us. The previous governor is behind us. Our Congressional delegation is unanimously in support. This is not just one or the other, saying, “Let’s do this.” When you have so many people believing in something happening, everybody working together, we can get it done.

Are there issues? Do I wake up at night worried? Yes, I do. But we’ve got a plan and just because I’m worried doesn’t mean I’m not going to try.