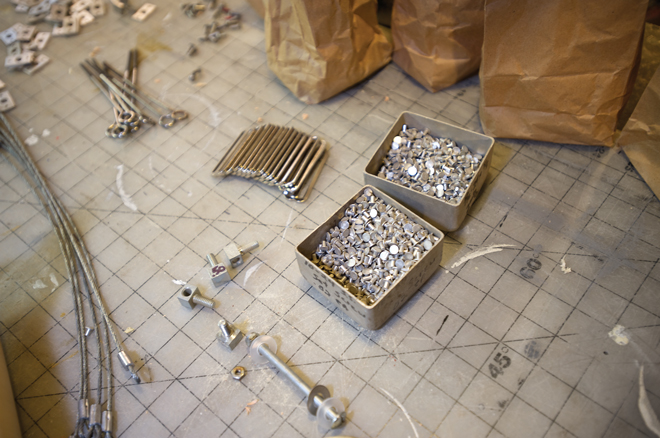 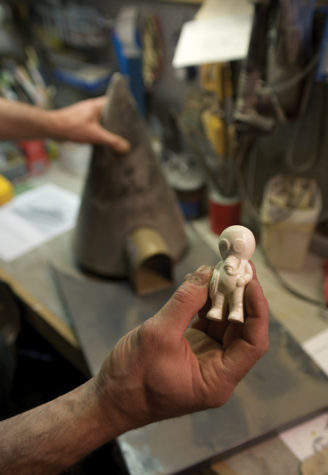 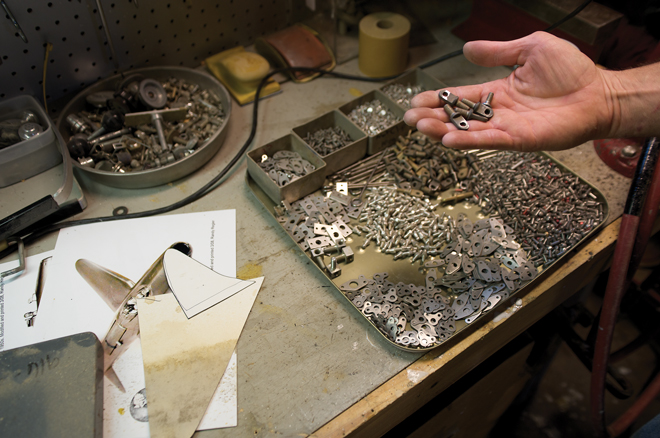 Materials from aeronautical and industrial surplus shops in Kansas 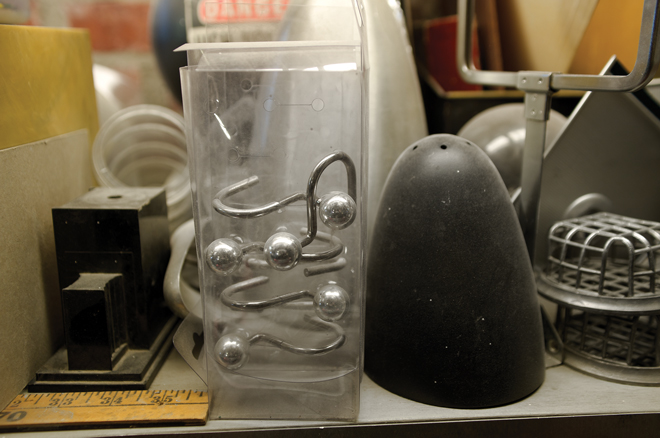 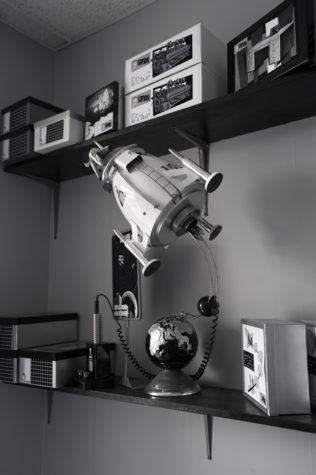 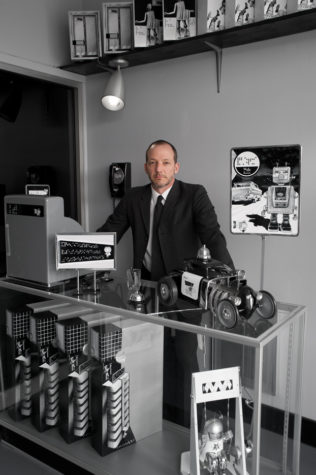 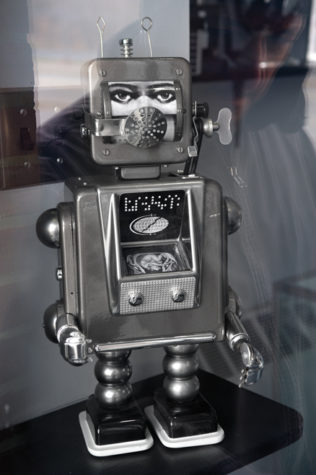 Robot with Teletype punch-tape code that says, Love You Forever 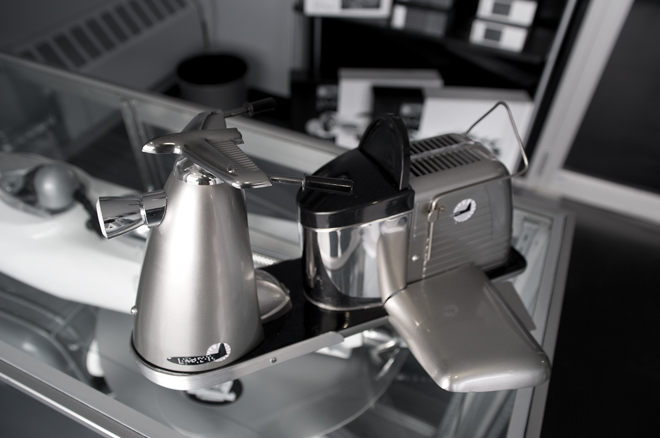 PROFILE-April 2010
By Peter A. Smith
Photographs by Scott Peterman

The entrance vestibule to the old brick Central Maine Power building, in a bleak industrial section of Waterville, is lit 24 hours a day. A sign outside says, “NuPenny” and “I Love You.” Whoever put this toy store here is not making it obvious.

Inside, a gray faceless clock ticks away. Shelves are lined with boxes and boxes of bright, shiny toys. A silver flying saucer tow-truck! The chrome glimmers, like diamonds under a jeweler’s case. Everything is rendered in photographic grayscale, expect for a single brass penny on the floor.

The colorless store appears as if it were a dream—slightly odd, slightly off, yet entirely possible. On one shelf, a spaceman has locked himself out of his lunar lander. He’s got his hands up to the window, shielding the glare, and is peering through the window. The television is on inside the lander and a beautiful woman is trying to reach the spaceman.

Hello? He can see her through two panes of glass. But my keys. They’re right there. Where I left them­. On the seat. They’re almost within reach.

Standing on the street in Waterville, with your hands up to the glass, you can imagine being a spaceman stuck outside this toy store that has crash-landed on earth. A car rumbles by. You want to step inside, but the doors are locked.

The only way in: imagination.

I call up Randy Regier, the artist behind the toys, the storefront, the installation, and the entire concept of “NuPenny: Waterville.” He says the best way to get inside is to imagine being inside, but he also admits that it’s open for those curious enough to track him down. He might even unlock the door and retrieve a toy for you.

He’s not in Kansas anymore
Regier had been in Kansas before. Before his dad moved to Oregon and got a job on an egg farm. He lived in a trailer on the edge of the field. Then, one night, 29 years later, Regier had a dream about Kansas. He decided he had to get out of Beaverton, where he had been working with his dad and doing bodywork for 29 years. He was making impossible sums of money—$50,000 a year—but it was time to leave the headaches and the depression and exhaustion and the misemployment that made it impossible to be a caring father.

He drove to Kansas and called a realtor from a phone booth. Hello. Yes. I’d like to rent a place. Nine days later, Regier moved Vicki and the kids—Rachel, aged 4, and Jake,
aged 6—to a rental in Abilene, Kansas. He sold furniture for a couple months and finally decided the only way to get out of bodywork forever was to go to college.

“I had made a lot of stuff in my life,” Regier says. “I just had never realized it was art. The undergraduate degree was great, but I still had a lot to learn about what it meant to be an artist, not just how to make art. So we came out here to the Maine College of Art to get my master’s. We’d never lived by the East Coast and Vicki and I were both curious. We thought, ‘What the hell, we’ve got nothing to lose now…’ Except, we didn’t exactly think in those terms. And here we are.”

When letters arrive for the institute, the post office circles the address—74 Smith Street—and pens a little squiggly blue question mark.
Is it the right place? Is this where dreams are built?

Regier saves the letters and tacks them up behind his workbench, under the sixties-era science kits, under the old microwave panels that his dad salvaged for him in Oregon, under the pipes hanging with dishcloths that soften the blows. This workshop is where his dreams become a reality, where he fashions robot toys with such precision that almost anyone would believe NuPenny were really a toy manufacturer with a storefront.

The letters are a confirmation. He sends the curious viewers a pin from the American Dream Technical Institute. This connection means more than actually opening up the NuPenny in Waterville for walk-in sales. “I find it’s much more compelling to give away art to people that ask for it than it is to try and sell it,” he says. “And it doesn’t pay our rent, but it’s much more interesting.”

Dreams of inner space
Fisher Fire Fly, a heavy, green, metal Apollo-era looking spaceship you could crawl inside, landed at the top of the stairs at the Decordova Biennial in Lincoln, Massachusetts, earlier this year. Outside, a mannequin stands in a matching space suit next to a scale model of the vehicle and a few news articles about the spacecraft. Regier installed Honorable Mention: H. Maxwell Fisher and the Space Race, as a factual mission to outer space; the piece is entirely a creation of Regier’s inner space, fabricated from heavy pieces of old farm equipment he found in Kansas.

Regier labors away on the miniature and the gigantic, ten hours a day. His hands have been falling asleep—all pins-and-needles numb—from the years of manual work and manual art. He regularly does pull-ups in his basement studio as a preventative against carpal tunnel. “It’s an industrious practice,” he says. “The work that I need to make most—my best intentions—are probably in front of me, but physically I’m 20 years behind. Had I been making art in my early 20s in the sense that I knew I was thinking of art, I would already have a 25-year career behind me and maybe things would be different. The worst-case scenario is going back to the bodyshop. I think I’m finally past that, but it still gives me night sweats that somehow this won’t work out.”

Regier’s dreams seem to be working their way out into the world—with three-dimensional toy stores, intricate toys steeped with longing and desire, and a totally handspun, totally Space Age reality.

NuPenny was made possible in part from the generous support of the Harry S. Faust Public Sculpture Fund and the Hathaway Creative Center in Waterville.