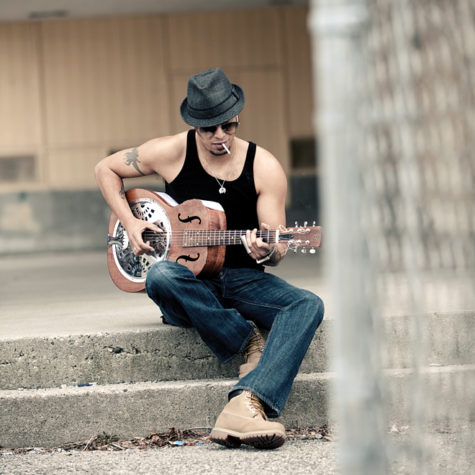 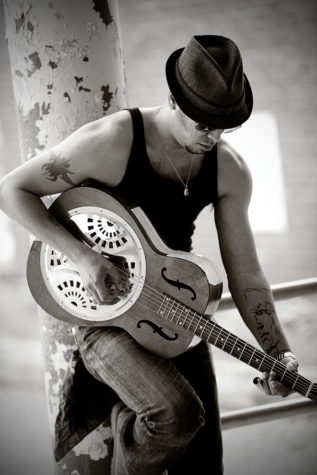 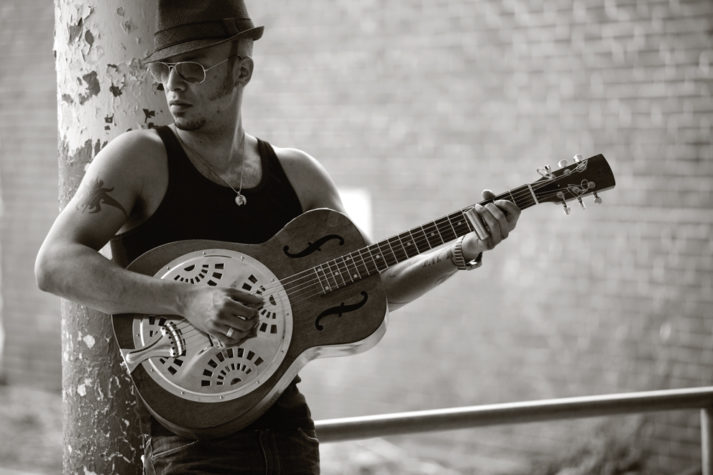 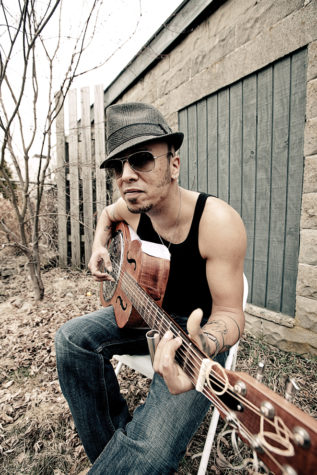 The bluesman and his trusty six-string, purchased three years ago at Buckdancers Choice in Portland. I bought it with money from my first professionally-paying gig, says James. The show was in Quebec, and I got up early so I could make it back to town before the store closed.

FEATURE-May 2010
By Peter A. Smith
Photographs by Michael Winters

To get a sense of Samuel James’s currency on the Maine music scene, you need to hear a story about Scott Levy.

As the artistic director of the Penobscot Theatre Company, Levy had been incorporating more African-Americans into the Bangor theater’s seasonal productions since 2006, when he cast a local child actor who happened to be black as Tiny Tim in A Christmas Carol. A production of Driving Miss Daisy, featuring another black cast member, followed in 2007, but Levy had his eyes on a bigger prize: staging a show with an all-black cast, about the black experience, in one of the whitest cities in the whitest state in America.

Problem was, Levy’s dream show—Spunk, an adaptation of three stories written by Zora Neale Hurston during the Harlem Renaissance of the 1920s—needed more than just an all-black cast. As conceived by George C. Wolfe, the piece centered on a character called “Guitar Man,” an omnipresent troubadour type whose bluesy acoustic guitar and all-seeing insight ties the show’s trio of disparate tales together.

Remembers Levy, “I needed a black actor who not only could play guitar, but who was young, and who could play the blues in a way that felt wise and experienced and authentic.” He laughs. “The show wouldn’t work, otherwise. Guitar Man’s onstage the entire time.”

Levy figured he’d find his Guitar Man the same way he’d cast the rest of Spunk, through national auditions. But last fall he explained the role to Paul Benjamin, organizer of the North Atlantic Blues Festival, who was hosting a Tab Benoit concert at the Penobscot. “There’s only one guy in the world who can plays this part,” Benjamin told him. “And he lives in Maine.”

Born in Biddeford, the great-grandson of a slave, James came into the world with music etched firmly in his DNA. His grandfather was a blues guitarist. His African-American father was a session musician from Tucson, Arizona. Mom, the white daughter of a church pianist, was a dancer. Their house was never without with music, thanks to Dad, who played everything from piano to trombone. “He knew Maine was a really white place,” remember James, “so he took it upon himself to surround me with as much black influence as he could.”

Hence Langston Hughes was on the bookshelf
and Duke Ellington on the stereo. Dad taught his son how to play guitar, then piano at the age of 8, when James’s hands were big enough to handle the keys. After Dad moved back to Tucson, Mom commenced with tap-dance lessons. Eventually, James was touring four times a year on the New England circuit, even giving lessons to older folks hoping to put some pep in their step—all by the time he was 12.

That year, his mother passed away, and since his father was out of the picture at that point, James spent his teen years in a series of foster homes, including one in Gorham presided over by a father who called him “chocolate baby” and “black bastard.” But even in welcoming houses, James still felt alienated. “You’re a black kid in a white foster home, so kids in school are going to call you ‘nigger,’ and the foster parents won’t know what to do about it. They try to console you and say ‘stick-and-stones’ and things like that. But it’s sort of broken from the beginning.”

Yet the loss of his mother ultimately deepened James’s belief in himself, and his faith in the world at large: “I realized that, when somebody says something bad about you, you can take it to heart, or you can move on to the next person and hope they say something nice. And if they don’t, probably the next person will.”
If we were really spinning a classic myth, “The Tale of How Samuel James Got the Blues,” this is the part that would take place at a rural crossroads at midnight, with James playing the role of an ambitious guitar player eager to sell his soul to the devil. In reality, though, James’s blues epiphany began in Portland and unfolds a lot like the movie Forgetting Sarah Marshall.

“This is such a corny story, and I really hate telling it,” James says, laughing. “But it’s true! Absolutely true.”

“I’d been to art school,” he continues, “and I was living in Portland, painting and hanging shows and stuff. And there was this girl that I’d been seeing for about a year and half. I thought it was pretty serious. But then one day, really surprisingly, she said, ‘We’re done.’ Just like that.”

It’s worth noting that this happened on June 13th—a Friday, to be exact. “The beginning of summer!” he remembers. “So I said, ‘If I’m not feeling right by fall, I’m takin’ off.’” Guess who ended up buying a ticket to Ireland with a three-month departure date? “I ended up meeting this street musician from Oklahoma who’d gone AWOL from the military, who was making money by playing songs that everybody loves. Stuff by Johnny Cash, Muddy Waters, ‘Sweet Home Alabama,’ anything.”

The concept of being a one-man show—a solo acoustic act—was incredibly appealing. “I knew I could do this,” says James. “I’m incredibly impatient, especially with myself. But if I had a drummer who forgot his sticks? There might be a fist fight.”

He returned from Ireland with a new sense of purpose, taking advantage of his hometown’s sizable network of music venues and open-mic nights. “Portland doesn’t really have any specific music scenes,” he says. “You can go to a hip-hop show or a death-metal show or one of my shows and probably see all the same people there. So if anybody’s good, they’ll get noticed pretty quickly in this town. And people will support them.”

Six feet tall, wearing either a dapper vest and tie or just a tank-top and suspenders accessorized with a pork-pie hat and aviator shades, hunched over his acoustic guitar and keeping rhythm with his tapping shoes, Samuel James sure cuts an image of the true, red-blooded bluesman when he’s performing onstage. In fact, you might even think he’s not performing at all, like maybe this cat drinks his coffee and eats his morning eggs with that six-string still strapped across his back.

But James, who sports jeans and sneakers like the rest of us when he’s offstage, is really a showman at heart. “I’ve always loved to tell stories,” he says.

Indeed, James’s third album, For Rosa, Maeve and Noreen, plays all of six seconds before bucking an expectation or two. After letting his slide guitar weep a few chords, James launches into the tale of “Bigger, Blacker Ben,” who wakes up one night to find a burning cross on his lawn and a gang of white-hooded husbands: “We hear you been
with white women, behind closed doors/ Ben gave ’em a wink and a smile and said, Just yours and yours and yours and yours…”

Since the husbands are more like the Six Stooges, they hang Ben from a tree with a rope that’s too long. Then, after they all end up shooting each other dead, Ben strolls off into the dawn. “You know the sun’s comin’ up,” James roars, “and someone’s gotta go console some wives!”

Far from being a confessional songwriter—the type of artist whose songs read like journal entries, for better or worse—James admits that he does cherry-pick from his family history on occasion. For instance, his mother was the daughter of a county sheriff, who died well before she ended up meeting James’s father. “I like to pick and choose certain parts from certain things,” he says. “But then I’ll give them a sort of O. Henry twist at the end. Like, ‘Wouldn’t it be funny if this happened?’”

It’s worked out well so far. These days, James carries a well-stamped passport, having played shows in Poland, France, Spain, Scotland, and Wales. But Portland is still the place he calls home. “You can walk down the street and smile at people, and no one thinks you’re crazy,” he says. “If you don’t know somebody, you can ask them their name, and they’re likely to tell you. I’m a world-traveling musician, but I don’t own a car because I can walk in my hometown.”