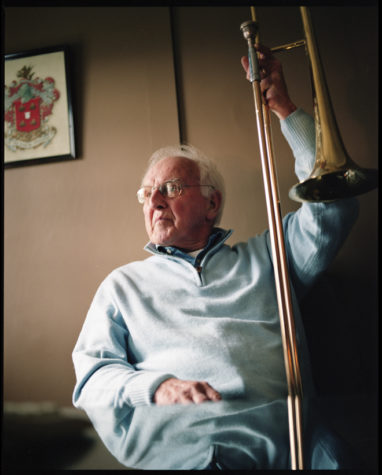 What have you done over the years?

I was in the army, mowed lawns, and did a little lobstering. Eventually my brother-in-law and I bought my father and his brother’s general store. We stayed in that until 1980, and then I concentrated more on my real estate. And I’ve stayed in real estate.

So you own the island?

I own one dwelling. A converted barn;
1870s barn. Post and beam. Belonged to
the Dodge family.

The Pendleton name’s all over.

They’re all my listings in Islesboro. Thank heavens I don’t own them. I’d be the baron not just the mayor.

There’s a lot of Leechs, Durkees, and Pendletons. And then Williamses. The Leechs and Durkees, they came here when the summer cottages were being built. And they’re called over-homers. Because on the weekends they would go back across the bay. Some of them did settle here. And the Durkees came from Nova Scotia.

So you know the book about a house on Islesboro?

Yes, Ved Mehta’s Dark Harbor. I sold him that land. I know Veddie very well. Known him for years. He’s an interesting man. You might call him a character. He’s been blind since I’ve known him. He bicycles all over the island. There’s all kinds of characters here.

He is really one of the nicest people you’d ever want to meet. John used to fly in from Bangor and get off the plane—with company—never failed to come over and talk. Nice fellow.

Boy, 99% of the time, I have my Blackberry. And I have my corncob pipe. I don’t smoke anything but that. Usually after a meal.

My goodness, back in those days they weren’t cocktails. You had bourbon. You had scotch. Or you had gin. There was very little water or mix in any of them.

Your drink of choice

What do you play?

I play the trombone in the Charlie Pendleton Band. We play all the old stuff-—stuff from the twenties, thirties, and forties. God, we’re all over 70. Once or twice a year, we get some old friends of ours who like jazz so we play jazz or Dixie or soul music.

For getting around the mainland

I have a big ’97 Lincoln Towncar. I like big cars. And before that I had three Cadillacs and every one of them was a ’76.