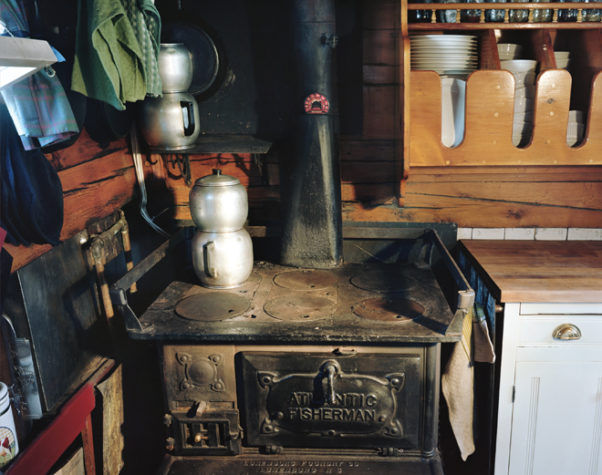 Chef Anne Mahle doesn’t have the luxury of space and tranquility. She is the head chef on the J. & E. Riggin, which she owns with her husband, Jon Finger. The 120-foot schooner is part of the historic Maine Windjammer fleet, which takes guests on overnight excursions along the coast. Mahle and Finger have owned
the boat since 1998.


”Undoubtedly, the most legendary schooner that ever sailed the bay,” is how Donald Rolfs described the boat in the book Under Sail: The Dredgeboats of Delaware Bay. Built in 1927, the boat spent much of its career in Delaware Bay hunting oysters. Today the National Historic Landmark spends most of its time carrying passengers between May and October, making about 25 trips a season.

Before it was the tiny workspace of Chef Mahle, the galley was a space to store the catch. It was renovated into a kitchen in the late seventies when the boat was retrofitted for passengers.

Often there are thirty people on board and it’s Mahle’s duty to plan three meals a day for guests and crew. With trips lasting anywhere from four to six days, over 500 meals must be prepared in the space of a dining room table. Supplies are found in the compact shelves or beneath the benches of the galley. Storage is a constant issue, “but it fits, it always fits,” Mahle says. Besides limited storage, she also has a limited workspace. Mahle estimates that she has about three-square feet of counter. “I only stand in one spot,” she says. “I turn around, I cook. I turn around, I cut.”

The vintage, cast-iron stove was brought aboard the ship when it was modified for passengers. A wood-burning stove means a slower cooking time, so Mahle often prepares dishes like roasts and stews.

But space constraints and rocky seas don’t stop Mahle from doing her job. “It has to be done, I have thirty people that have to eat,” she says. “And there is no way out.”