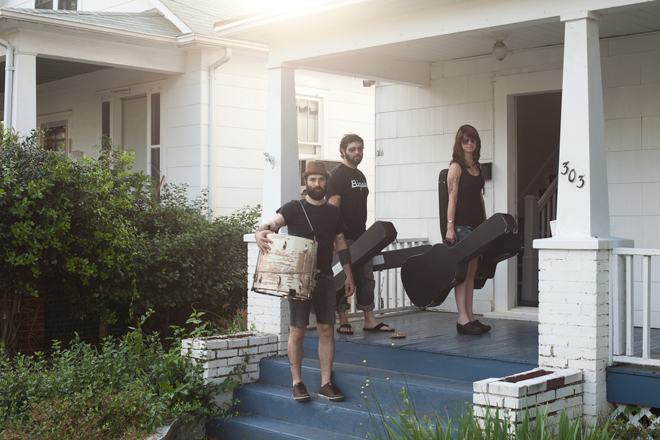 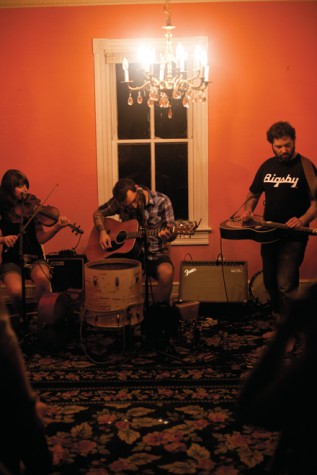 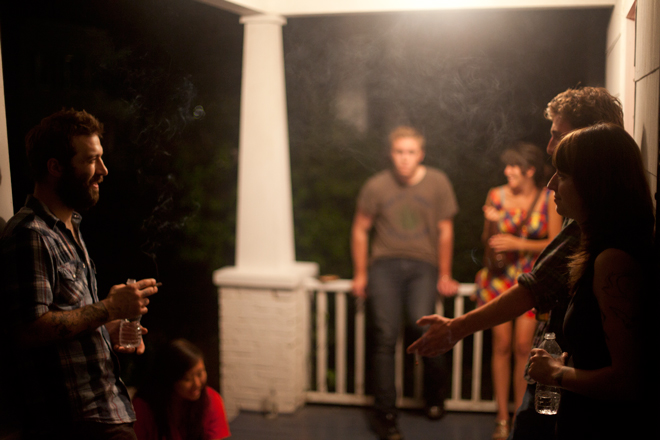 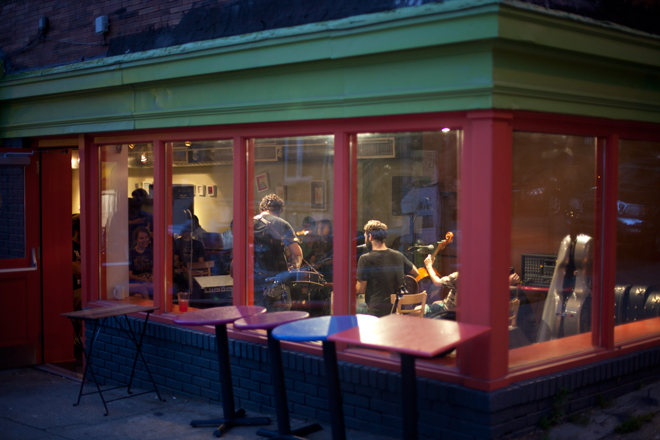 Brown Bird will be playing at the Singing Out Against Hunger Festival at Evelyns in Tiverton, Rhode Island on September 12.

The trio is influenced by country, early American folk, blues, Eastern  European, and Gypsy music, and has fans on both sides of the Atlantic.

Dave Lamb is a one-man band: the 32-year-old leader of Brown Bird plays guitar and percussion at the same time, and sings lead vocals. In his trio, he is ably accompanied by the lithe and elegant MorganEve Swain, 25, also multitasking on vocals, fiddle, cello, ukulele, guitar, and upright bass (but not playing them at the same time like Lamb), and Mike Samos, 31, on lap steel guitar and Dobro.

Suddenly, SPACE Gallery on Congress Street in Portland is transformed from an artsy urban performance space into a country hoedown, as Brown Bird transports the audience to the Blue Ridge Mountains with toe-tapping excitement. MorganEve Swain’s fiddle evokes the old timey music of the Carter Family, and Lamb’s deep baritone conjures up the gravelly voice of Johnny Cash. Onlookers who are seated on the floor get up and begin dancing to “Down to the River.” The music is infectious. It segues from country to swing, from bluegrass to the blues, as Brown Bird moves on to crowd-pleasing favorites such as “Danger and Dread” off their fourth album, The Devil Dancing (released by Peapod Recordings in 2009).

Lamb actually started his musical career as a one-man band in 2003, playing solo in Seattle under the name Brown Bird. “I got the name from my dog, Bird, who is brown,” he says simply and affably. He then moved to Portland for a couple of years, and his friends Jeremy and Jerusha Robinson joined him, making Brown Bird a trio. In 2008, Lamb went on a solo tour and met MorganEve Swain and Mike Samos in Providence, and he invited them to join his band. The Robinsons eventually decided to return to their own band, South China, but they did play with Brown Bird on The Devil Dancing. So Brown Bird is now back to being a trio. Lamb, Swain, and Samos all live in the Providence area, but would love to move to Maine “if someone can give us a free place to live,” grins Lamb from the stage at SPACE.

Molly, a twentysomething fan in the audience, says she has heard Brown Bird several times and really likes them. “You can tell how much fun they’re having singing and playing,” she says, impressed by Lamb drumming with his foot pedal while strumming his guitar and singing.

Lamb writes most of Brown Bird’s music. “We take a little bit from everywhere,” says Lamb of the band’s influences. “Our music is a little bit of country and bluegrass, lots of blues, and we’re influenced by Eastern European folk songs, too.

“There seems to be something in the chord progressions and modal changes of Eastern European folk songs that are like Appalachian minor blues, and really move me. The songs can range from very mournful to celebratory,” says Lamb. Folk music got its name in Eastern Europe, from music that has “no known composer,” that is for and by the people—the name coming from the German volk, which means “people.”

Brown Bird does one or two covers during every gig: the unlikely “Sixteen Tons” by Merle Travis and “Jackson,” which was made famous by Johnny Cash and his wife, June Carter. As a songwriter, Lamb says he is influenced by the great country legends Cash, Willie Nelson, and Roger Miller.

Brown Bird has been well received by the critics, who enjoy the originality and artistry of the indie folk band. The Providence Phoenix praised The Devil Dancing for being the band’s “most vibrant and lively release,” adding, “the added instrumentation highlights the charismatic, sometimes unnerving, narratives of lead singer/songwriter David Lamb.” The Boston Phoenix went further, poetically describing Lamb as “an ancient foundation peeking up through wild grass, deeply rooted but whipped raw by the elements. His voice is world-weary and quietly powerful, a deep and humble timbre that resonates well after a syllable’s end.”

Brown Bird has also enjoyed some lucky breaks in their one-and-a-half years of playing music together. The Providence-based band The Low Anthem invited Brown Bird to join them on a tour to Belgium, Holland, Ireland, and the United Kingdom. “We were very welcomed,” Lamb recalls of the February tour. “The European fans recognized the influences that we brought with our music: the traditional elements of early American music.”

With fans on both sides of the Atlantic, Brown Bird releases its albums not only on CD but on vinyl as well, and both formats are selling well. Fans who purchase the album can also download it for free. “I listen to a lot of vinyl,” says Lamb. “I love records and actually don’t download any music. I buy CDs and records.

A record feels permanent and tangible.”

Earning the respect of one’s peers is highly prized in any field. Joe Fletcher leads the Providence-based band Joe Fletcher and the Wrong Reasons. “Musically, they are so tasteful and graceful, even when they start rocking it up a bit,” he says of Brown Bird. “Still, it’s authentic and raw. Let’s not forget that the beat is provided by Dave while he is playing guitar and singing perfectly. It sounds original and amazing, and it’s fun to watch.”

Fletcher also admires the trio’s musical ability. “They are each absurdly good at what they do: playing, singing, writing. You get the feeling they are executing exactly what they wish to do, and to me that has an electricity that’s priceless.”

At the SPACE Gallery performance, Lamb and Swain harmonize beautifully on the sexy, bluesy “By the Reins” (they are also a couple). The song is about the tension of love, as Lamb sings, “If you hold me too tightly by the reins / I will crumble to a powder / I will shatter and be swiftly swept away.”

Critic John Drake, in North East Performer, described Lamb’s lyrics as “emotional, thoughtful and evocative, resting wonderfully on a bed of cello, acoustic guitar, banjo and other assorted instruments.” Playing the plaintive chords of early American folk music, Brown Bird’s tunes evoke a historic past. By blending diverse influences and instruments, the band explores rich and new possibilities, and has made a sound truly its own.