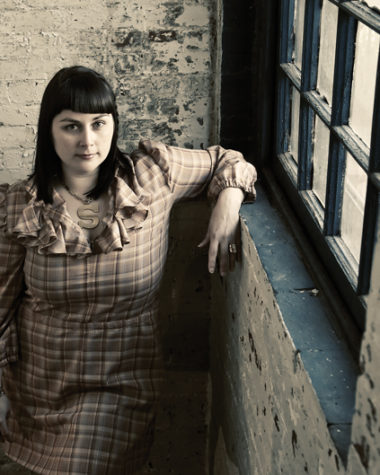 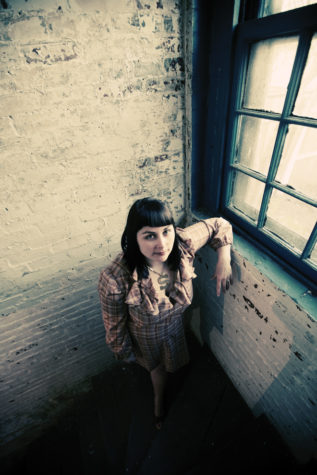 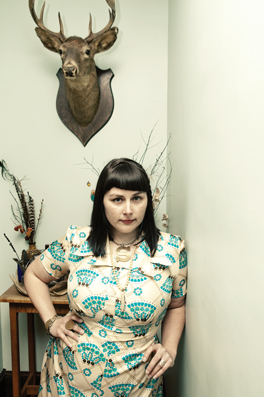 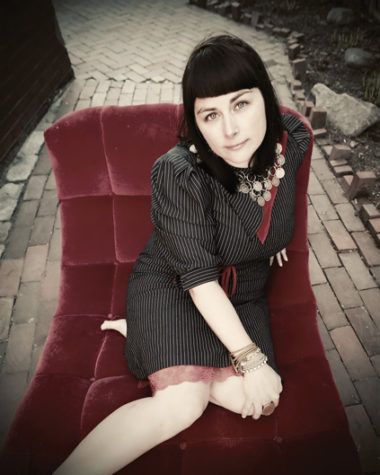 One tough songbird, Tomlinsons work breaking down gender barriers earned her the prestigious Maine Womens Fund Award in 2005. She wont mention her accomplishments in person, but declares on her MySpace page: Im a pro-choice, gear-switching, youth-teaching media darling. 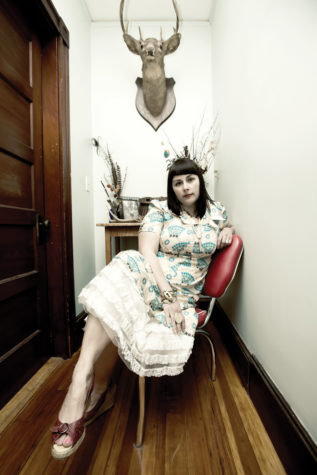 Tomlinson shows off her style inside her home. This March, she left her job of nine years at the Portland Phoenix to focus on music and work with friend and fellow musician Hannah Tarkinsons accessory line, Ponomo. She also sells vintage clothes online at her Etsy store, HandMeDownOwl. But shes ready to give music the front seat. Friends, like Alias wife Jenn Whitney, have faith in the small emcee with the big stage presence: Tomlinson says, Jenn told me, Sonya, you are a hustlerif anyone can do this, you can.

Steel yourself. She’ll steal your heart. She’s Sonya Tomlinson, AKA Sontiago. It’s hip-hop with love. Intelligent rhymes coming at you from Portland, Maine.

When hip-hop artists Bleubird and Astronautilus descend on Portland, they’re like two crows on carrion, dropping fast-paced rhymes, and swilling whiskey shots with a ferocity that teeters on the edge of recklessness. In March, Astronautilus returned to SPACE Gallery to perform with P.O.S. and Dessa, and the energy proved the same. By the end of the night, forty people rolled out onto Congress Street, gathering around for an impromptu, after-hours freestyle circle.

One fan remained inside. Upstairs, behind the stage, a short woman with jet-black hair, piercing blue eyes, and a sweet nasal-tinged voice was quietly settling up with the tour manager. Sonya Tomlinson had no plans to perform that evening. That is, until another SPACE staffer Bryan Bruchman saw what was going down outside. “He told me to stop counting cash and get out there!” Tomlinson says. She snuck up on the crowd just as the party was about to wind down.

“I could hear Astronautilus rapping and as soon as he stopped I jumped in—and I killed it!”

Tomlinson, who performs as Sontiago, has been killing it since she moved to Maine 11 years ago. In 2001, her sister encouraged to try out her skills at a local hip-hop open mic night. She was 24 and fresh out of college, a blow-in from North Carolina. “At that time I was so bored, working on the men’s floor at L.L. Bean. I didn’t know anyone and was craving social stimulation,” she says. “We got to the club and it was so nerve-racking—a million guys, all these dudes with their hoodies up. But I thought: I’m just going to do it.” The 5’3” newcomer to the Portland hip-hop scene stole the show. “Everyone just stopped, and I thought, ‘Yes, this is great. I own this stage right now.’”

Tomlinson owns more than just stages these days. After being picked up by the Endemik label out of Montreal, her 2007 effort Steel Yourself reached number 8 on the College Music Journal charts in New York. The album is a blend of cleverly crafted rhymes and lilting beats, with variations between rapping and singing. The album’s liner notes include thoughtful introductory paragraphs for each track. On “Old Orleans,” a track dedicated to the victims of Hurricane Katrina, Tomlinson tackles lofty issues. “Post-Katrina, we as Americans witnessed that segregation still rings true. As an artist

I feel it’s my responsibility to bring what I find unacceptable to the table through song,” she writes.

In a male-dominated genre known for

toughness and grit, Tomlinson is a refreshing and socially conscious female voice. “I knew Sonya, but watching her perform live—it was an experience on another level,” says Astronautilus. “She doesn’t showboat or steal thunder—she takes a room in all the right ways.” Longtime fan and Longfellow Books owner Chris Bowe first saw Tomlinson perform at the Old Port Festival, where the crowd gravitated toward her.

“There’s an aura and soul in that voice,” Chris Bowe says. “Sonya’s like the Edith Piaf of Portland. She’s got the pipes to do anything.”

Tomlinson’s sweet toughness started at home. Raised along with two sisters by a single mom she adores, she came of age in an era where hip-hop exploded onto the scene in a vibrant and controversial way. Acts like NWA and Public Enemy were telling the cops to shove it, and Tomlinson identified with the social movement. “I was obsessed with KRS-One. It was all music with a message.” She’s not averse to exhibiting the same kind of brazen honesty as her predecessors. Rather, she embraces the realities of being a woman in the hip-hop world. “I know that it’s to my advantage, but I’m at a point with my material where I don’t want that advantage anymore.” Tomlinson takes pride in surrounding herself with a crew that gives her honest feedback in a state where criticism doesn’t always flow as freely as the rhymes. She relies on fellow musicians like Alias, Bleubird, Astronautilus, former Portland musician Dilly Dilly, and her husband of five years, and fellow local hip-hop artist, JD Walker. “One of the drawbacks and beauties of Portland is that a lot of artists get credit for who they are, rather than what they do,” Tomlinson says. “It’s hard to air criticisms when you might see the person at the bar the next day.”

On a sunny April day, Tomlinson strolls into Coffee By Design in Portland. She’s vibrant, cheerful, and stylish. And she’s the first to admit that some things about her aren’t very gangster at all.

But she’s also got a hustler’s spunk. Her new as-yet-unnamed record will be released in the fall and she’s revving up already. The music is a shift, as she pushes her limits as a singer and a rhymer. “I’ve asked friends if they think change is valid, because after getting home from recording in Montreal , I’ve been thinking, ‘Oh boy. I’m making a pop album.’ One of my beats is 132 bpm! It’s an up album, but it’s not lacking in content.”

The new sound is promising. Endemik plans to shop the album out to bigger labels. “It’s certainly a more cohesive and consistent effort for me,” says Tomlinson. Astronautilus is excited too: “I am bursting to hear the end result, because I know she can sing and I have seen her rap her ass off—commanding a crowd comes naturally to her,” he says. “Now I can’t wait to see her out of her element. I think her best work will come when she’s working without a net.”

And should a major label pick up the record, the state’s hip-hop darling isn’t about to trade in her Maine life even as she continues to clear boundaries in her career. “Jay and I, we’re not going anywhere. If people only ever recognize me in Portland, that’ll be enough.”