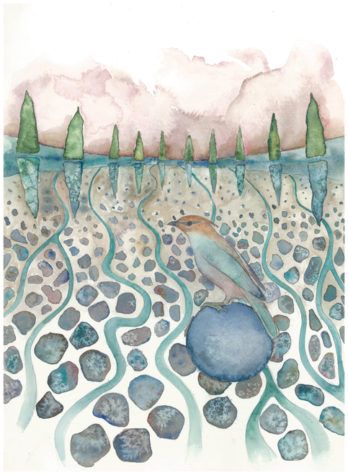 Mid-tide, when the sandbar floods,
the deeper channel marks a curving path,
dark seam of water where the ocean
enters twice a day to fill the sheltered cove
and swab the land leaving shells and husks
of finished lives along the beach. The land
too does its part, peninsula of pointed firs
that reaches out and leaches salt
into the seminal broth. I’m learning here
to see relationship instead of boundary,
my life as small as an ankle-high wave
that rises only once, say, at high tide
when it can catch the moonlight in its fist,
then curves and falls back into the
complexity that gave it form, energy
released into molecular flow.  Each wave
comes only once, but the tide,
being movement, remains itself forever.

Alison Deming spends time each summer on Grand Manan Island, where her family has had a house since 1957. About this poem she says, “It was written while I was staying at a friend’s house on Kennebec Point in Georgetown. Day after day I watched the tidal waters approach and recede. Those time-deep rhythms stirred the poem.” Lucinda Bliss, whose illustration Molecular Flow accompanies the poem, is the daughter of Alison Deming. Bliss says, “I loved the experience of lingering with one of my mom’s poems for a few weeks.”