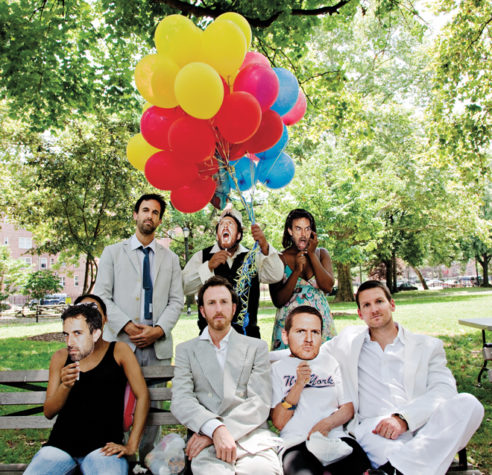 Guster's new album is called Easy Wonderful and you can get a free download of the track "Bad Bad World" at guster.com. They will be playing the State Theatre on October 27, returning to the venue for the first since they shot their only concert DVD there in 2003. 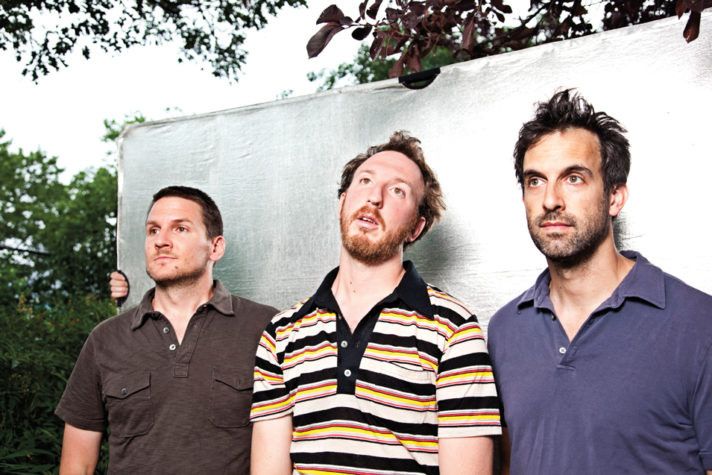 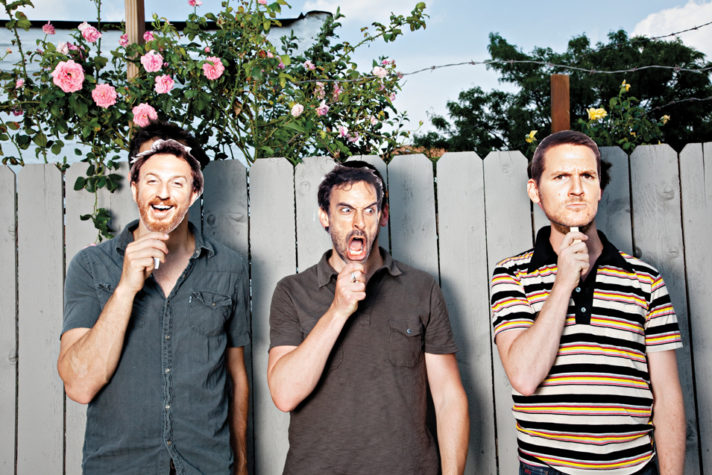 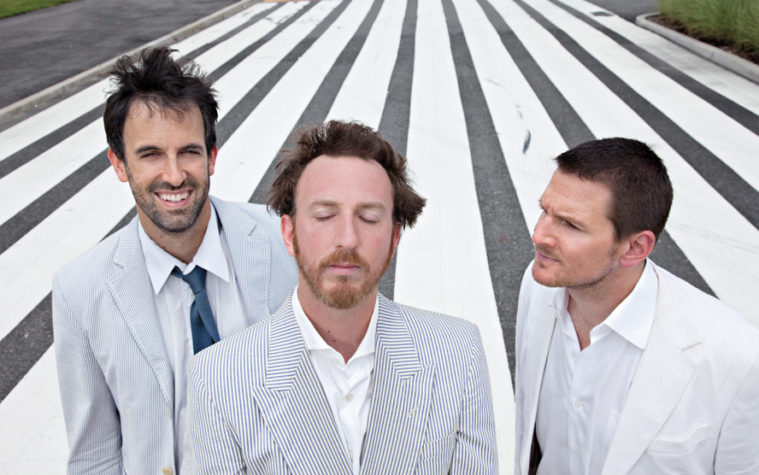 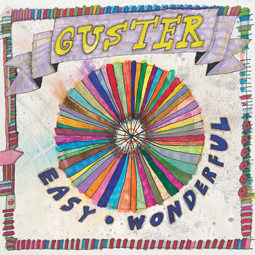 PROFILE-November + December 2010
By Will Bleakley

Guster has a new album, a new sound, and a positive message. They’re bringing all three to Maine and can’t wait for you to hear them.

Although they are not “from here” and most of them don’t live here, when Guster comes to the State Theatre on October 27 to promote their new album, Easy Wonderful, it will feel like a homecoming. Not only has singer/guitarist Adam Gardner started a family and business in Portland, but the band shot their live DVD/CD Guster on Ice and music video for “Careful” at the State in 2003.

Lead singer Ryan Miller, percussionist Brian Rosenworcel, and Gardner met, formed the band, and released their first album, Parachute, while they were students at Tufts University in the early nineties. They broke into the mainstream with their 1999 album Lost and Gone Forever and the songs “Barrel of a Gun,” “Happier,” and “Fa Fa.” Their next album, Keep It Together, cemented the band’s reputation with a spot at number 35 on Billboard’s Top 200 Albums.

The Onion (A.V. Club) describes Guster as “pop music that’s smart, and maybe even a little wise.” They’ve been characterized by their vocal harmonies and pop-rock melodies. In 2004, Guster added multi-instrumentalist Joe Pisapia to the group; however, he will not be joining them on their upcoming tour—he will instead be working with K.D. Lang—and Luke Reynolds will take his spot.

In 2003, Adam Gardner married Lauren Sullivan, a Wells native, and moved to Portland to start a family as well as a nonprofit called Reverb (both of which are expanding). Gardner’s organization educates musicians on how to produce more environmentally conscious tours and how to spread an environmental message to their fans. Gardner spoke with us about Guster, Maine, and Reverb while in Boston, where he is rehearsing with the band for their national tour.

Maine: So twenty years and six albums later you’ve already sold out shows on this upcoming tour. To what do you owe your longevity and success?

Adam Gardner: It’s probably that we still enjoy making music and we still feel like we’re getting better at what we do. Our songwriting has gotten stronger and stronger, our playing has gotten stronger, and we’re still enjoying making music together. We still feel like we’re making our best record, every time. The moment that changes, it would be tough to stay in a band. I didn’t grow up thinking, “I’m going to be a professional musician.” I knew music would be a part of my life. I didn’t realize that it would be my living.

M: Did becoming fathers (each of the original band members now has a two-year-old daughter) influence your music at all?

AG: I wonder. It’s interesting, because in a lot of ways we were able to be a lot freer with our music. Our whole lives weren’t wrapped around our band. We have this whole other massive experience happening in our personal lives, and it allowed us a lot of space from our own work, both in time and in perspective, which I think was really helpful. What it did do, and everyone says this—but it’s true—is that being a parent gives you a whole level of perspective that you’ve never had before.

M: You can tell. I was listening to the new album, and it seems more cheerful than past work, almost as if it’s from a different era. Also your album covers have gone from children breaking a piano in a wasteland on Lost and Gone Forever to kids drawings and rainbows on Easy Wonderful. Is this the new perspective of being parents?

AG: Well, even before fatherhood we had been trying to make a record that was more upbeat, more up-tempo, more energetic. In the past, the strongest songs we recorded were always more somber. That was kind of our wheelhouse—that was our strength. On our last album we said, “Let’s make a party record. Something you could play on a road trip when you’re in the car with your friends.” But it just sounded cheesy, so we didn’t do it. Finally, we were able to strike the balance on this record; we were able to take everything that we’ve learned from being a band for two decades and bring some of that level of maturity and craft to the songs, while still maintaining an up-tempo, positive energy.

M: What made you move to Portland?

AG: I fell in love. I met my wife Lauren shortly after I met my bandmates. She’s from Wells. I always knew in my heart: I’m going to marry this girl and I’m going to settle down. So that’s what we did. I love Portland. I feel very connected to it, even though I’m technically from away. I’m incredibly proud to have a sixth-generation Mainer as a daughter. I can’t imagine living anywhere else.

M: Are you excited to play the State Theatre again, now that it’s reopened?

AG: Yeah, I haven’t played there since our DVD filming, so I’m really excited. I don’t live too far from the State Theatre, and when it was closed it always bummed me out. To me, it always represented this potential of what Portland could be.

M: How did Reverb get started?

AG: It came about in 2004. Lauren has been an environmentalist ever since I met her, and that rubbed off on me. However, we lived one way at home, and we did all the right things that you’re supposed to do environmentally, and then I go out on the road with my band and it would be the complete opposite. Jokingly, in order to make ourselves feel better about it, we nicknamed our bus the “Earth Eater.”  We didn’t feel good about the way we toured, and I talked to lots of other bands on the road that felt the same way. So Lauren then came up with the idea for Reverb.

M: Why do you focus specifically on music tours?

AG: The old paradigm of bands trashing hotel rooms has shifted. Fans want to know what bands stand for, so you’re starting to see a lot more artists who are supporting causes. And as Lauren said to me: “The tour is an incredible platform to promote environmental causes and action. You’ve got 3,000 people coming to your show and your friends in the Dave Matthews Band have 30,000 people coming to their shows.” So we decided to make the tour itself green, and make the artists be able to walk the talk, support local and national nonprofit groups at the shows, and ask their fans to take action.

M: What are your thoughts on U2’s massive 360-degree tour, which needs 120 trucks to move its stage?

AG: It’s tricky. Going on tour has a negative impact on the environment. There’s no doubt about it. As much as what Reverb is doing, touring still negatively impacts the environment—we’re just lessening the negative. The biggest thing for me is that we’re changing people’s hearts and minds with Reverb, which has a longer-lasting effect than any tour, or even any given band. U2 just obviously is the biggest extreme. You know, it has the biggest carbon footprint of any tour ever, and they’re offsetting it. I guess the question is at what point is it just excess? I don’t know, but there’s still a long way that the music community needs to go. I guess that’s why I still work at it every day.

M: What are some concrete ways for bands to be more environmentally conscious on their tours?

AG: We basically present bands with a menu of possible ways to reduce their carbon footprint, from using biodiesel for their tour buses to something as simple as having them use reusable water bottles. We say, “Here are some bands doing the full kit and caboodle—Jack Johnson, Dave Matthews Band, John Mayer. If that’s too much to start, let’s talk about these options, and figure out steps that are possible.” What’s nice, is that as an artist myself I can speak to them from their perspective and say, “Look, here are easy things to do, but they can have some serious impact.”  The list we send is on our website (reverb.org) for fans and musicians to look at.

M: Is there anything you would like to say to help get more national bands to come to Maine in, of course, the most environmentally friendly way possible?

AG: Yeah, it’s worth the trip! It’s only two hours north of Boston. It’s not that far. I think if you’re not from New England, Maine seems like Alaska to a lot of people. I got married in Maine and my parents said, “How are we going to get everyone up there?” I told them, “It’s not that far.” Yeah, they were living in New Jersey at the time.