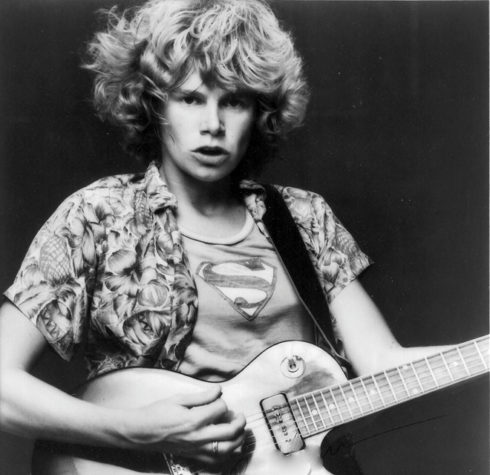 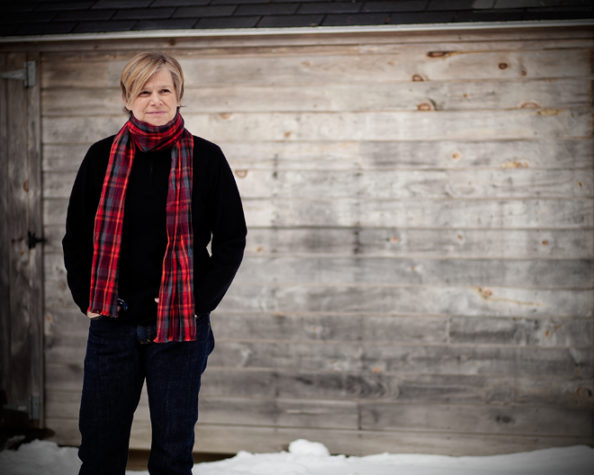 Born in Massachusetts, Bullens has called Cumberland home for two decades. She is currently working on a new album with the Refugees entitled Three, due out in June. 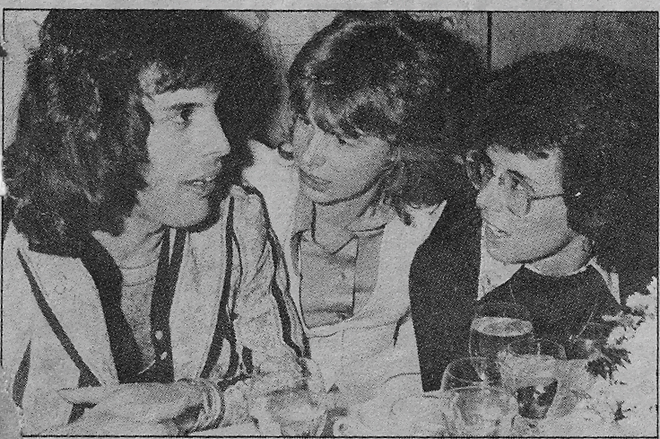 Freddie Mercury, Cindy Bullens, and Billie Jean King in a Los Angeles restaurant after an Elton John concert in 1975. 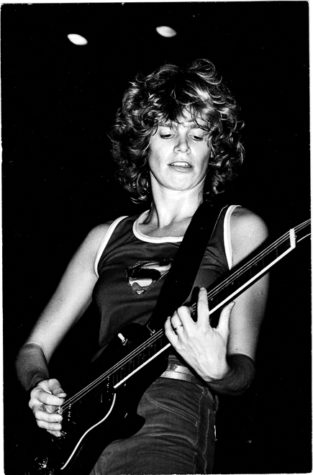 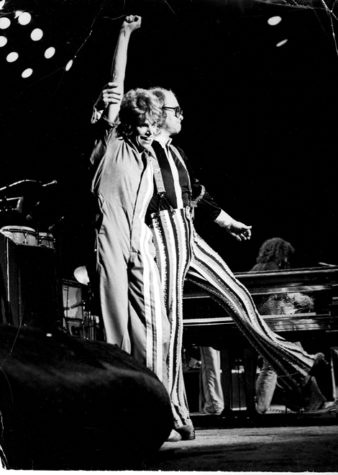 With Elton John in concert in 1975

Singer-songwriter Cindy Bullens has sung backup for Elton John, been nominated for two Grammy awards, and released nine albums—but instead of hanging out
in the Hollywood Hills, she calls Cumberland and North Haven home. After living in the state for twenty years, there’s no doubt that Cindy is a Mainer.

In 2010 Bullens released a new album, Howling Trains and Barking Dogs (M.C. Records). With original tunes including “Labor of Love” (which she wrote with Radney Foster) and “All My Angels” (written with Wendy Waldman), the album has a country twang but moves to its own groove, driven by Cindy’s deep, soul-stirring lyrics. Despite her success, Bullens remains, as the Washington Post dubbed her, “the critic’s darling” because in her thirty-six-year career she has yet to hit the big time.

Bullens is also highly respected by her fellow musicians. Bonnie Raitt said of her 2004 album Dream #29: “Cindy’s dug deep and come up with a raw, loose, and rockin’ crop of great songs and playing. Love the ‘Exile on Main Street’ vibe, and her vocals and lyrics always cut right through to the heart of the matter.”

Enthusiasm, depth, and gusto for life are characteristic of Cindy Bullens. Born in Boston and raised in West Newbury, Massachusetts, Bullens dreamed—like a lot of young people in the 1970s—of going to Los Angeles with her guitar and making it in the music business. But Cindy didn’t just dream. Shortly after she arrived in California in 1974, she met Elton John at a party, and he invited her to sing backup with him. In her early twenties, she sang on three of his tours, on his multiplatinum album Blue Moves, and on his 1976 hit with Kiki Dee, “Don’t Go Breaking My Heart.”

Bullens was making all the right connections in Hollywood and the music business. She sang lead vocals in three songs on the 1978 soundtrack of the film Grease (“It’s Raining on Prom Night,” “Mooning,” and “Freddy My Love”) and earned a Grammy nomination. The following year she received another Grammy nomination for the hit “Survivor” off her debut solo album Desire Wire (United Artists). Yet, in 1979, her career got sidetracked when she fell in love, got married, and moved East with her new husband, Dan Crewe.
The story of how she met Dan is another gem. “Before I met Elton John,” she recalls, “I was in L.A. working at a gas station, sleeping on the couch at an apartment of someone I knew, and ‘somebody knew somebody’ who knew Bob Crewe.” Crewe discovered, produced, and wrote all the hits for the Four Seasons except “Sherry.” She was able to drop off a tape at the home of Crewe’s lawyer, and when she did Crewe invited her in for dinner.

“Later I got kicked out of the apartment where I was staying—or rather, kicked off the couch where I had been for a month. I was on the streets of L.A. The only phone number in my pocket was Bob Crewe’s. I was afraid to call him, but I did anyway. He asked me to call back in an hour,” Bullens recalls. “So I went to a coffee shop where I met two runaways who said they had a place to stay,” Bullens continues, in a narrative that could be from Bob Dylan’s song “Desolation Row.” “So I call Crewe back and he says, ‘Be at the studio at 10 a.m. tomorrow.’”

Bullens ended up working as Crewe’s gofer, driver, and protégé. In the process, she met Crewe’s brother, Dan, a real-estate entrepreneur, who was forty at the time. Bullens was only twenty-four. Despite the age difference, Cindy and Dan soon married and moved to Westport, Connecticut, which led to a period of career schizophrenia for Bullens.

“I had a record come out in 1980 that didn’t do anything,” Bullens says. The album was Steal the Night on Casablanca. In 1982, her daughter Reid was born, and Bullens decided to leave the music business. After her daughter Jessie was born three years later, Bullens looked for ways to be in the business without compromising being a full-time mother.

In early 1990, she performed at a Roy Orbison Tribute in Los Angeles with Bob Dylan, K.D. Lang, and Jackson Browne. The musicians she met rehearsing for the concert, such as Emmylou Harris, recognized her talent and encouraged Bullens to come to Nashville and write songs with them. She accepted their invitation, turned the kids over to Dan for a week, and headed south.

“I wrote ‘Whistles and Bells,’ which the Dixie Chicks did before they were famous,” says Bullens. “That’s why I say I live near the water in Maine, not on the water.” Bullens and Crewe moved their family to Cumberland in 1991. It was a natural move for Bullens, who had summered in Kennebunkport and on Chebeague Island with her maternal  grandparents and other relatives.

Although she remained in Maine, working as a songwriter in Nashville gave Bullens a chance to recreate herself. “Nashville saved my musical soul,” she says with evident gratefulness. “I was accepted and was appreciated in a way I wasn’t in L.A.” Her latest album, Howling Trains, includes songs she wrote in Nashville. “And I met Wendy Waldman there! And here we are, twenty years later!” she says. Singer-songwriters Wendy Waldman and Deborah Holland have teamed up with Bullens to create a trio called the Refugees. The soaring harmonies on their album, Unbound (2009), evoke the mid-1980s collaborations of Dolly Parton, Linda Ronstadt, and Emmylou Harris.

Bullens’s songwriting talent was never more necessary or helpful to her than in 1996, when her beloved daughter Jessie died of Hodgkin’s disease shortly after her eleventh birthday. The Bullens-Crewe family was devastated. Four months later, Bullens began to write songs about her loss. Since she felt ambivalent about the process, she went to Nashville and talked to singer-songwriters Beth Nielsen Chapman (who lost her husband to cancer and wrote songs about it), Bonnie Raitt, and Rodney Crowell, a singer-songwriter and producer.

She asked Crowell if he would help her with an album of new songs she was writing. He agreed—but only if she made the entire album about Jessie. Crowell’s encouragement was instrumental to her. “He helped me see that if I didn’t let out my grief this way I would forever regret it,” she confesses. “He was a huge support.”

The resulting album, Somewhere Between Heaven and Earth (1999), was a turning point for Bullens both professionally and emotionally. It was Bullens’s most critically acclaimed album and on many major newspapers’ top-ten lists that year.  Rolling Stone critic and Bruce Springsteen biographer Dave Marsh also shared the experience of losing a child (his daughter Kristen Ann Carr died of cancer at the age of twenty-one). Calling the album “exhilarating and triumphant,” Marsh wrote in its liner notes: “Part of the miracle is that Cindy draws so deeply and intensely and relentlessly from that shattering experience, without letting up for one verse of one song….But the other part of the miracle…is how Cindy has chosen to live, and to write and to sing.” The album was released worldwide and became a fundraising tool for the Maine Children’s Cancer Program at the Maine Medical Center, where Jessie had been treated. The fundraising began humbly; at first Bullens released 1,000 albums, sold them for $25 each, and gave the cancer program a check for $25,000. But over the past decade, Bullens and Dan Crewe have raised more than $700,000 to benefit the Maine Children’s Cancer Program and other organizations in honor of their late daughter. Bullens also recruits A-list friends such as Tim Wakefield to help out with the fundraising.

“He’s a big music fan,” she says of the popular Red Sox pitcher, who often jams with her. “In 2004, I asked him to play [guitar] for a Jessie fundraiser.” Wakefield agreed. “Of course, that year they won the World Series!” says Bullens, who had scheduled Wakefield’s appearance long before the end of the season. “But Tim followed through. He came up and played with my band,” she says. Bullens has also included Wakefield on her Dream #29 album. “He was thrilled,” she adds. The album includes another old friend—Sir Elton John—who recorded his part on the same piano—at Caesar’s Palace in Las Vegas—that he was playing in his “Red Piano” career overview at that time.

Today, Bullens is “happily single”—Dan, now her ex-husband, lives across the street from her in Cumberland—and her daughter Reid also lives nearby, with her husband and two daughters. Bullens spends as much time as she can with her young grandchildren. Among her new projects: she has been asked to write all the music for a new musical based on the award-winning children’s book Calico Buffalo. The play will open in 2012.

Refugees bandmate Wendy Waldman sums up Cindy Bullens’s personality and talent: “If you have the good fortune to become friends with her, never take that gift for granted because she is a very rare being. Cindy has more soul, depth, insight, joy, pain, courage, and backbone than most everyone else. She’s a hell of a musician, a great storyteller, and a marvelous entertainer who understands what it is to lose, to come back from the edge, and what it is to triumph with joy against darkness.”

“I’m lucky that I get to ride with her,” Waldman concludes. “She’s my hero.”