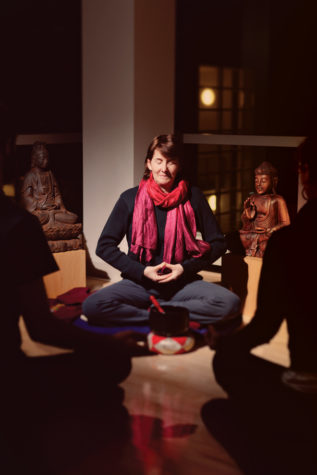 Lisa V. Blake meditates in her class at Bowdoin College, making the dhyana mudra with her hands. This traditional hand position symbolizes an empty bowl, receptive to new energy.

“Try meditation before medication.” Founder of the Maine Mindfulness Project Lisa V. Blake calls meditation an “ancient practice for modern times.” She has worked with people with insomnia and depression, the young and the old, the sick and the healthy, college presidents and incarcerated teens. She encourages her students to follow the Dalai Lama’s famous advice, “be wisely selfish” as a way toward living with compassion—and changing our minds.

“My spirit soared free like a great whale gliding through the sea of silent euphoria. Harmonic. I remember thinking there’s no way I would ever be able to squeeze the enormousness of myself back inside this tiny little body. But I realized, ‘I’m still alive! I’m still alive and I have found Nirvana. And if I have found Nirvana and I’m still alive, then everyone who is alive can find Nirvana.’ I pictured a world filled with beautiful, peaceful, compassionate, loving people who knew that they could come to this space at any time. And that they could purposely choose to step to the right of their left hemispheres and find this peace. And then I realized what a tremendous gift this experience could be, what a stroke of insight this could be to how we live our lives.”
—Jill Bolte Taylor, from “Stroke of Insight,” a talk she delivered at the 2008 TED conference

Jill Bolte Taylor’s TED talk narrates the experience of life without the overlay of the left brain—the hemisphere that is rational and analytical, that examines parts rather than wholes, and that operates in a logical, sequential fashion. Taylor experienced the fullness of the right brain—the holistic, intuitive, synthesizing mind that sees the big picture—when a massive stroke shut down the functions of her left hemisphere. Drinking a cup of tea overlooking a tidal inlet in Freeport, Lisa V. Blake, a practicing Buddhist and a mindfulness meditation teacher, says, “Is it coincidence that Jill Bolte Taylor is a brain researcher? That she would have a stroke that she could document and record? I prefer the term synchronicity to coincidence; it’s not just two things happening by chance out of chaos.”

In recent years, meditation has entered the Western mainstream, not only through New Age practitioners but also through neuroscience. The Dalai Lama, the world’s most recognized Buddhist spiritual teacher, gave the keynote address at the Society for Neuroscience’s annual conference in 2005, the largest gathering of neuroscientists in the world.  In January of this year, the New York Times featured an article, “How Meditation May Change the Brain,” highlighting a study that found increased brain-tissue density in a control group that practiced thirty minutes of daily meditation for eight weeks. The tissue changes occurred in areas associated with memory, empathy, stress, and sense of self.

This all fits well with a phrase Blake has trademarked: Try meditation before medication. When Blake herself went in for surgery, she refused the preanesthetic agent. “Before I went under, they wanted to give me a relaxing injection into my IV, and I said, ‘You know what? I’m so relaxed, please just wheel me on down.’” She joked and talked with the staff and anesthesiologist all the way to the operating table, where the impressed anesthesiologist asked, “What do you do for a living?” Blake responded that she was a practitioner of meditation. “They all said, ‘Where? We want to come!’” she remembers. “Did they ever come? No, but that decision saved me from having all these other chemicals in my body.”

“Wellness is recognizing that no one is perfect,” Blake says. “Life isn’t always going to go our way—in most cases, I think, it really does. But when it doesn’t, we need some exercise, some practice, to help reset ourselves, to meet that feeling, then set it aside and move on. Otherwise you move from ease to dis-ease, and that’s what creates sickness.”

Her Buddhist teacher, the Tibetan monk Khen Rinpoche Tsetan, once joked with her about how concerned Americans are with exterior beauty and cleanliness, about how they jump in the shower first thing in the morning when the more important practice is to take “the internal shower,” a two-minute meditation that cleanses one’s energy and sets an intention for the day. “If you go to bed in a bad mood,” Blake says, “it can be like emotional Velcro. It’s sticking. If you don’t know how to take it off, it has to just wear out. And that can take a long time. Everyone has the capacity to make oneself clean and pure. But how? You don’t just have your bowl of Cheerios and walk out the door. You need to set a commitment to yourself and your community to bring out your best, open-hearted, highest self of love and presence.” In other words, a “spiritual discipline, a workout,” Blake says, is a routine as important as going to the gym, eating healthy food, or taking vitamins.

Blake was raised as a Catholic. When she was at Bates College, she was the first student to do a thesis on the AIDS epidemic. She began to see that the things that interested her and inspired her came back to compassion. After teaching public school in Hawaii for several years, she returned to the Northeast and enrolled in the Bangor Theological Seminary with the intention of becoming a spiritual teacher. In 2002, she met Rinpoche, and he told her about the Siddhartha School, which he had started in his home village of Stok in Ladakh, India. When Blake mused about volunteering to teach English there, Rinpoche said, “Oh yes—you will.”

The next year, Blake encountered Rinpoche again when he was a guest speaker in her world religions class. He gave her solid advice about encountering a Buddhist spiritual teacher: Wait seven or eight years and observe him or her. If you are still convinced of the teacher’s qualifications, then take vows. She followed that first teaching.

In 2005, as part of her master’s degree, Blake received a grant (from the Maine-based Eleanor Humes Haney Fund) to teach and study peace at the Siddhartha School, where she was surprised to discover that they weren’t using meditation. Blake found herself in the unusual position of being a Western woman, not yet Buddhist, teaching mindfulness meditation in the Himalayas to students of a Tibetan Buddhist monk. After spending two summers there, the Siddhartha School asked her to join as the executive director.

At home, Blake teaches workshops through the Maine Mindfulness Project, which she founded. From private institutions such as Waynflete School to local public schools, the Maine education system has been increasingly receptive to the practice. Bowdoin College now has a dedicated meditation room in its Wellness Center, thanks in part to Blake’s work with students there. As part of a teacher-education course, she led a weekly meditation lab. During the last class, in a discussion about the concept of “mind,” Blake asked the thirteen students, “Where is mind?” She then asked them to point to it on their bodies. “Twelve of them pointed to their heads,” she recalls, “but the young man from Korea, with his hands on his heart, started looking around at his classmates, saying, ‘How can that be?’ He was so distraught. He said, ‘Why do you all point there?’ They said, ‘Mind is like brain.’ And he said, ‘But mind isn’t brain—brain is something else. Mind is feeling, heart, connection, love.’ I couldn’t have taught it better.”

Blake talks like a running stream, a font of soothing tones and compassion that bathes the listener in a feeling of peacefulness and acceptance. Last September, she began volunteering at South Portland’s Long Creek Youth Development Center, a detention center for juvenile offenders. With two other people from the Sadhana Meditation Center, the trio offers kirtan (responsory chanting), yoga, and meditation to a handful of incarcerated girls.

She leads the meditation session and weaves in a short dharma, or life-lesson, discussion based on questions such as “What do you want out of life?” Blake says, “I want them to apply the practice to make better choices and decisions for themselves—to learn about intention. I explain that making your own decision and not following ‘the gang’ does not mean you can’t still be friends with people. It is important to emphasize judgment and responsibility only for one’s own actions, to avoid seeming judgmental or taking responsibility for choices made by others.”

This kind of meditation, she hopes, will be a tool for mindfulness, clarity, and better decision making. And by pairing it with breath meditation for relaxation, Blake says she helps the girls “find inner peace in a world that doesn’t present much peace anywhere else.” The young women are under continual surveillance; they sleep with the lights on, and many are prone to violent or emotional outbursts. Although it can be a stressful environment, in many cases it’s less chaotic than where they came from.

The girls often tell her that the sessions were too short, and that they wanted to “stay in that space” longer. She gently reminds them they now know a technique to do that whenever they want. “It’s just amazing to be a person in the life of others who says, ‘Look, no one ever taught you this before, but you are able to do remarkable things in life when you come at it with love, peace, and good intentions,’” Blake says. “To be able to do this, there is a simple practice to keep yourself clear and strong. You can really learn to go within and trust what you find there, and then bring this out into the world. Ultimately, we learn to rely on ourselves when others believe in us. My message to young people is always, ‘I believe you are capable of anything you set your mind to.’ And of course, I am always pointing to my heart!”