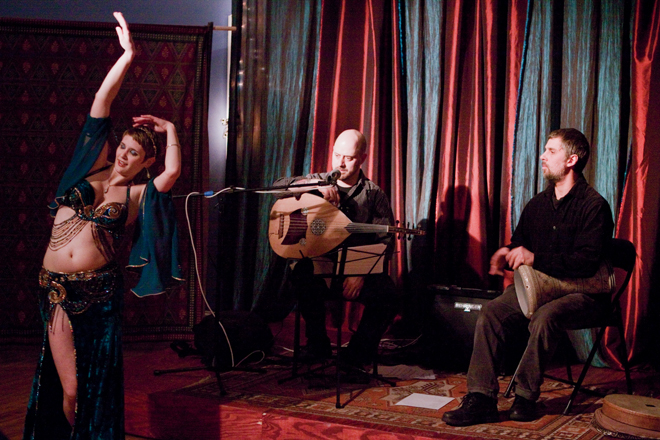 Every music fan loves a good cover song. And Portland serves up some noteworthy performances, including Clash of the Titans—an endlessly evolving series in which local musicians pay tribute to iconic groups and battle for audience votes (Wednesday evenings at Port City Music Hall)—and Cover to Cover—a new series that features local artists performing original music followed by their favorite classic songs (Tuesdays at Big Easy). We’re betting on the Holy Boys Danger Club for a startlingly accurate rendition of the Strokes’ hit “Is This It” at the Big Easy on May 17.

One of Maine’s favorite blues-inspired performers, Samuel James, is overseas this month playing shows in Ireland, England, and Germany. Direct your European friends to sugarsmallhouse.com for tour dates.Back home, Portland band This Way has finished their new eleven-track record, Goodbye Forever, which was recorded by Abel Adame of Drumshow Productions and mastered by Jeff Lipton of Peerless Mastering. The release party will take place on May 21 at Port City Music Hall.

Rosanne Cash
May 7 | 8 p.m.
The daughter of Johnny Cash has quite a lot going for her beyond the famous name, including her latest album, The List, which pays tribute to classic songs from her father’s repertoire and features the likes of Bruce Springsteen, Elvis Costello, Jeff Tweedy, and Rufus Wainwright. Here she’ll perform as a duo with her husband, John Leventhal.
Strand Theater | Rockland | rocklandstrand.com

Steve Martin + the Steep
Canyon Rangers
May 18 | 7:30 p.m.
Imagine that you’re a local bluegrass band in North Carolina. And then imagine a famous comedian calls up and asks you to be his backup band. What do you do? If the comedian is Steve Martin, who also happens to be a Grammy-winning banjoist, you say, “Yes…please, Mr. Martin!” Their new album together, Rare Bird Alert, is out now.
Merrill Auditorium | Portland | porttix.com

Samuel James
May 26 | 10 p.m.
Back in the States after a tour abroad (see News + Upcoming Releases), Samuel James and frequent collaborator D. Gross share the stage again at the most intimate venue in Portland. Arrive on the early side if you want a seat.
Blue | Portland | portcityblue.com