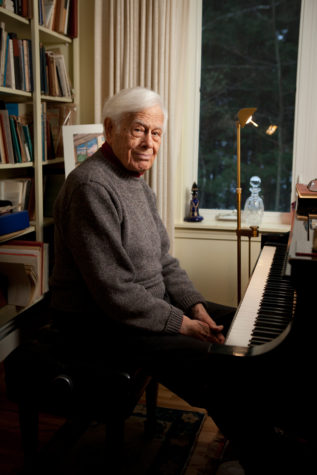 What contemporary composers and compositions do you admire?

I like the Copland Variations very much, and I have played them a lot and recorded them a lot, even though they were not welcomed in Europe—the critics felt that I could have found a better American composer than Copland. They couldn’t take all the dissonance in that piece, but I think it’s a great piece. I also like Samuel Barber’s Excursions and Charles Griffes’s Roman Sketches—the first of which is a famous piece called “The White Peacock.” I felt it was important to perform one twentieth-century work in every recital I gave after World War II.

You studied anatomy to play the piano more efficiently. What did you learn?

I learned a lot from what I read—Gray’s Anatomy, books about the Alexander Technique, and Otto Ortmann’s book The Physical Basis of Piano Touch and Tone. I learned that if you can do it with one muscle, don’t do it with three. I learned how not to tense a muscle that raises the arm. You have to have tension, but it’s the relationship between tension and relaxation that’s important. Most people make the mistake of working too hard. Also, you have to know how to get the most sounds out of a piano, to get all that it has to offer, and then apply the right sounds for the right composer and the right piece. I have heard Mozart sound like Chopin, but that is not the right style—the texture is different.

What brought you to Maine?

I love New England, and my wife’s family had a farm in the Kezar Falls area. After I left the Eastman School of Music in Rochester, New York, we moved there because we had spent the last twenty years fixing it up. I also lived in Cambridge, Massachusetts, for five years and loved it.

How many hours a day do you play? And do you still stay up after midnight at the piano?

I used to practice for four hours a day, but now I can’t tell you. If I’m not writing out a check or preparing my lunch or going to the drugstore or teaching as an artist in residence at Bates College—my thirty-first year—then I’m at the piano. I’m still learning new repertoire. I never get bored. I’m playing better than ever, and now is not the time to quit.

At 96, what do you think is the secret to a long and happy life?

First of all you have to be lucky with your genes. Other than that, have a positive attitude. You know what they say: smile and the world smiles with you, weep and you weep alone. It’s absolutely true. Also, have a goal and develop self-discipline early on. I was very fortunate to have a wonderful marriage for fifty-four years—there is nothing like that! Luck too, of course. I was at Omaha Beach eleven days after D-Day. Fortunately, I never got hurt.