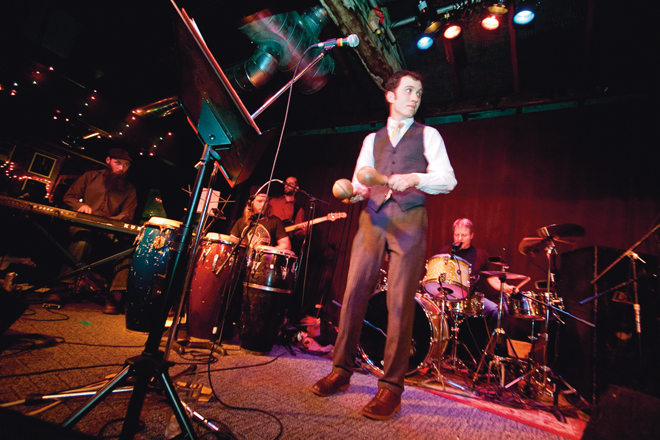 Kenneth Masloski, an experimental musician from Sidney who works under the name “inkmink,” is currently recording an album based on works by modernist illustrator Charley Harper. His inspiration for the project? A wall calendar featuring Harper’s work. So far, the tracks span a variety of ambient music genres from downtempo electronic beats and textural soundscapes to audio collages reminiscent of documentary audio recordings.

The Milkman’s Union continue their takeover of the southern Maine indie-rock scene with their new single, “Texas Hold Me,” available digitally and on vinyl. The B-side track, “Little Bird,” features guest vocals from Lady Lamb the Beekeeper’s Aly Spaltro, who also contributed vocals to another friend’s recent album: Jesse Pilgrim and the Bonfire’s Trial and Error, which includes a duet between Spaltro and Pilgrim on the bittersweet country jam “Lead Me Down.”

Congratulations to The Modest Proposal, of Freeport, for winning the 2011 MAMM SLAM finals, which took place at Port City Music Hall on April 30. The six-piece group—now officially known as the Best High School Band in Maine—not only took home an assortment of professional services (photography, graphic design, and studio time) and a cash prize, but they also got to revel in their rock star glory immediately, opening for local pop-punk heroes Sparks The Rescue on the night of their big win.

Portugal. The Man
June 1 | 8 p.m. Replete with experimental pop hooks, vocal Jack White-isms, fuzzed-out guitars, and chaos to spare, this quartet began in Wasilla, Alaska, but they currently call the other Portland home. This long-awaited stop in Maine will be the band’s first.
Port City Music Hall | Portland | portcitymusichall.com

Jesse Pilgrim + The Bonfire
June 10 | 8 p.m.
Bridging the gap between folk and punk, Jesse Pilgrim sings songs about the people and places of Maine—with a healthy bit of booze thrown in. Joining the Bonfire are the like-minded (though more country-tinged) Goddamn Rattlesnake and GraveRobbers.
The Oak + The Ax | Biddeford | theoakandtheax.blogspot.com

Chris Isaak
June 14 | 7:30 p.m.
With his recording career now passing the quarter-century mark, Chris Isaak has cre- ated an extensive catalog, including “Wicked Game” and “Baby Did a Bad, Bad Thing.” He’ll play the singles, of course, but make sure to give the newer songs—like those off 2009’s Mr. Lucky—a chance.
State Theatre | Portland | statetheatreportland.com