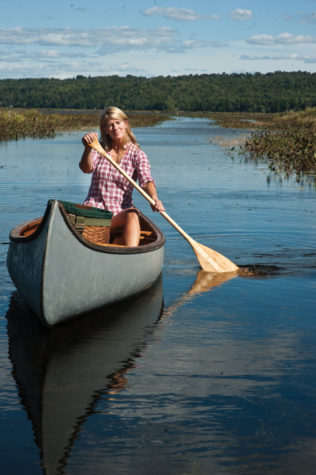 Where are you from?

I’ve lived all over. I was born in Vietnam in a little village called Gia Dinh and lived there until I was six and a half. My dad worked for the State Department, so we lived in a lot of places. After Vietnam, we lived in Califor- nia, Arizona, Idaho, Massachusetts, and Pennsylvania.

How did you end up in Maine?

I met Chip Cochrane in Tahoe, California. He had just gotten off the U.S. Ski Team, and I had moved to Tahoe to stay with my mother. Chip always wanted to go back to his home in Maine, and he persuaded me to move here. We’ve been married 19 years.

Any adjustments to living here?

Initially, it was a real struggle. I had never even camped out. Before I met Chip, I had never set foot in a canoe. My family was not the outdoorsy type—that was where other people went, not us! All of a sudden I was thrust into this multigenerational guiding family. It took a couple of years to get into it.

Describe what you do.

We’re working guides on the Allagash River, which is a state waterway that stretches for a hundred miles. Our company has been in business for three generations. It was started by Chip’s father, Warren, and grand- father, Herb, back in 1953. Herb was a great teacher. Besides Chip, he was my biggest mentor. Now we take guests on the Allagash and show them the beauty of the Maine wilderness. Sixty percent are from New Eng- land, ten percent from Maine, and the rest are from around the country and the world. We get beginners and experts alike.

Ever had any close encounters?

I was on the Penobscot two years ago, and in the middle of the night I heard snorting and clanking moose antlers 20 feet from my tent. I didn’t know what to do, so I just lay there quietly. It was mating season, and two males were vying for the attention of a female. My tent was on the beach, and the next morning the campers and I found moose tracks all around my tent. Of course, I wasn’t worried about being attacked—I was more concerned about them stomping on me!

What image comes to mind when you think of your trips along the river?

It’s hard to point to one thing on the Allagash. It has such variety—from rapids and cascading falls to big lakes and little lakes. But I think Allagash Lake is the most special spot to me. Nothing motorized is allowed on it, so the level of quiet is quite amazing. But really, I love it all. I never wake up during a nine-day trip and say, “Ugh, I wish this part of the trip was done.” Being out there for that time forces me, and our guests, to get away from the world of tech- nology and engage with nature.

What was it that allowed you to embrace the life you have now?

You come around the bend, and see the same moose that you have seen year after year. You wake up and see a blue heron fishing for his meal or go to bed and hear the loons call. That never gets old for me. At the end of the season, I could take a couple of days off and then start over again. That lets me know that I am doing what I should be doing.