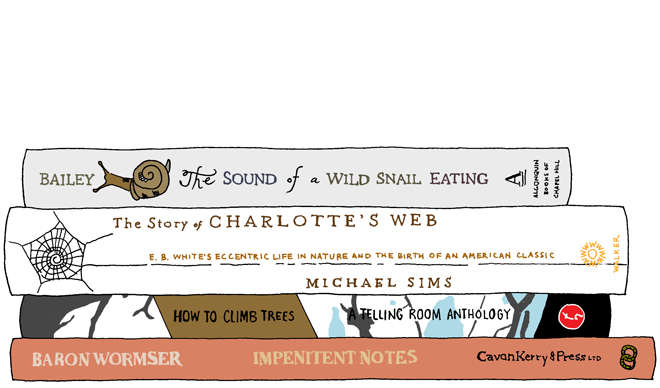 IMPENITENT NOTES
Baron Wormser
CavanKerry, March 2011
Former poet laureate of Maine Baron Wormser is enthralled by the everyday. This new release, his ninth, holds a steadfast poetic voice while history, memory, and modern life commingle. Wormser juxtaposes the unexpected—the question of free will in Paradise Lost Jell-O–wrestles with itself in “The Uses of Literature”—and gives voice to real and imaginary characters, all of whom express themselves with nuance and depth.

HOW TO CLIMB TREES: 40 STORIES AND POEMS ABOUT PLAY
2011 Telling Room Anthology
May 2011
The Telling Room’s newest anthology, How to Climb Trees, is a collection of stories and poems that revolve around the theme of play. From the mesmerizing piece that inspired the title to quirky stanzas about pesky younger siblings, these young Maine authors write with enviable daring and clarity of vision. Make a contribution to the Telling Room and purchase this book online or at local bookstores.

THE SOUND OF A WILD SNAIL EATING
Elisabeth Tova Bailey
Algonquin, August 2010
When a mysterious virus leaves the author barely able to lift her head, a wild snail living in a flowerpot becomes her unlikely companion. First intrigued by the square-shaped bite marks left by the night wanderer, Bailey spends a year closely observing the gastropod. In a memoir that defies expectations and engages scientists and literary critics alike, Bailey offers profound insight that could only come through such rare and remarkable attentiveness.

THE STORY OF CHARLOTTE S WEB: E. B. WHITE S ECCENTRIC LIFE IN NATURE AND THE BIRTH OF AN AMERICAN CLASSIC
Michael Sims
Walker & Company, June 2011
This biography of E. B. White recounts the acclaimed author’s life with a close affection; Sims paints a picture of a young, imaginative boy and, later, a man with a deep fascination with nature. As one of the best-known authors in American history, White’s story—of his youth, his time on the family farm, his work with the New Yorker—is one that is rich and succinctly American, and Sims has told it well.