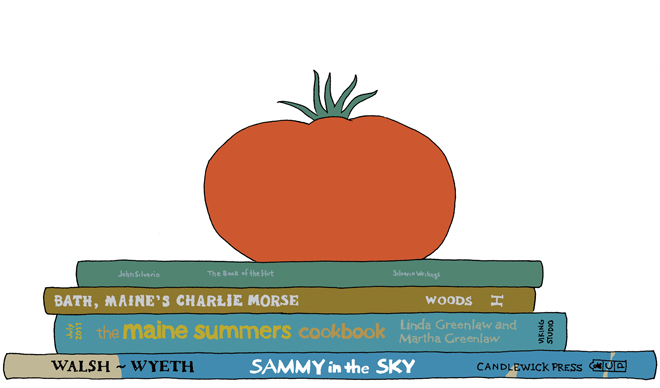 Bath, Maine’s Charlie Morse: Ice King and Wall Street Scoundrel
Philip H. Woods
The History Press, May 2011
Philip Woods tells the story of a businessman’s ill-gotten gains. Charlie Morse of Bath seemingly could do no wrong as a businessman until his investments turned sour and his ice fortune melted. In this historical yarn, Woods tells a tale of eighteenth century Bath at the very height of its shipbuilding growth.

Sammy in the Sky
Barbara Walsh
Illustrated by Jamie Wyeth
Candlewick Press, August 2011
Pulitzer Prize–winning journalist Barbara Walsh and internationally recognized painter Jamie Wyeth have combined forces to create a wonderful and poignant children’s book about the love between a girl and her dog. Both Walsh and Wyeth live in Maine during part of the year.

The Book of the Hut
John Silverio
CreateSpace, April 2011
In this short exploration, Maine architect John Silverio arrives at the “essence of shelter” in the hut, the primitive dwelling from which have sprung elaborate houses. He argues, in lucid prose and with understated passion, that the lessons of the hut’s design and symbolism should be incorporated into contemporary architecture and living to offer solutions to our postmodern age’s ailments of loneliness and distraction.