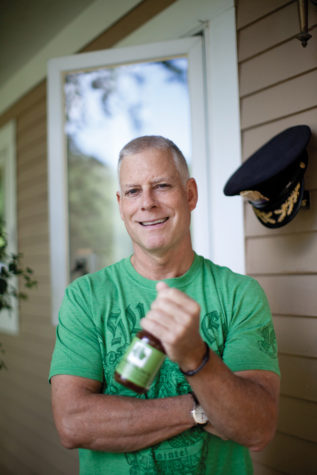 You’re originally from New York. How did you end up in Maine?

In my head as a young man, I thought Maine was like Alaska—I thought I was going to see bears going down the street. We went up to St. Joseph’s College and I said, “Dad, I don’t think I can do this.” And he goes, “Well, it’s either this or Vietnam.” To make a long story short, I ended up staying four years, and it was a great benefit to me because I needed a small college with personal attention. I wish my father had picked someplace warmer, but here I am in this beautiful state.

How did you become a Police officer?

When I came out of college, I never in a million years thought I’d be a cop—never. I wanted to be a natural scientist or a park ranger. I had inadvertently gotten involved in police work through an experience in New York, and I was stunned by what I had observed, and by the fact that these guys and gals [police officers] were just regular people trying to negotiate that difficult world. I saw Portland as an evolving city that was changing, and it seemed like a place you could make a difference. On the side of the police cars it says, “Protecting a Great City,” and I really believe that. I’ve seen a lot of changes in the population, the demographics, the physical appearance of the city, which is wonderful.

What stands out from your 28-plus years with the force?

My favorite job was being the lieutenant detective in charge of the criminal investigations division, which I did for four years. It was a very fast-paced, interesting job. I could find myself working with the FBI, the U.S. attorneys’ office, the media, and covering crime scenes all in the same day. I often say police officers work and function in a world that goes far beyond the realm of normal experiences, just in one shift alone. I think mainstream society doesn’t really have any idea what police actually do on a day-to-day basis and the human tragedy and misery they’re exposed to in a complex environment.

One case in particular, the murder of Amy St. Laurent, captivated Portland in 2001. What was it about this incident that prompted you to write your book, Finding Amy?

I felt compelled to do it. And it was hard, but I was passionate about it—the last thing I wanted to do was come home and look at crime-scene pictures for the book. What I was trying to do was show the emotional and psychological components, and the protracted nature of real-life investigations. You see these foolish shows on TV about police work, and all that happens in an hour, but it could take months or years in the real world. So in Finding Amy I was trying to immortalize her spirit and to educate women about the fact that there are predators who will capitalize on a moment in time.

What are you hoping to get out of the next few years?

Peace, travel. [I want to] do different things, and be more open and adventurous than I have been in the past.

You also make a steak sauce called Loughlin’s Irish Marinade. Where did that come from?

I still have my father’s original writing of the ingredients. We made it together a couple times, and I got it down pretty well. I’d always make it for ski trips or camping trips for the guys and everybody would say, “This is great.” So I ended up producing it and bottling it. When my father died in 1990, I said two things: “I’m going to make that marinade and market it, and I’m going to get my master’s.” And then I worked on my master’s and accomplished that too, in his honor.