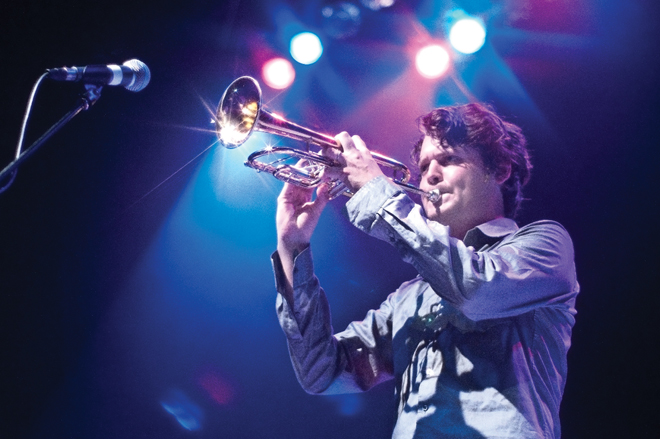 Portland indie-country group Wesley Hartley and the Traveling Trees called it quits earlier this year, but three of the band’s four members have turned up the volume and formed Splendora Colt, a similarly influenced but more rock-based project.

The Portland Symphony Orchestra will have a dynamic month with three separate programs led by conductor Robert Moody. October 2 and 4 bring music by Torke, Beethoven, and Brahms with pianist Awadagin Pratt, and October 23 has violist Laurie Kennedy and the work of Barber, Bloch, and Schubert. October 8 and 9 welcome the eighty-member-strong United States Naval Academy Men’s Glee Club for the PSO Pops!

Jonathan Richman
October 12 | 8:30 p.m.
The legendary “Modern Lover” returns to Space Gallery for what we’re sure will be another sold-out affair. As usual, he will be joined by Tommy Larkins on drums.
Space Gallery | Portland | space538.org

Andrew Bird
October 15 | 7:30 p.m.
It may be something about the uneasy simplicity of his melodies and his gentle vocals that made Andrew Bird, a trained violinist, such a huge success. But whatever the reason, we’re glad he seems to enjoy playing in Maine. Dosh—an electronica musician and frequent collaborator—opens the show presented, curiously, by the State Theatre but held in Skowhegan.
Skowhegan Opera House | Skowhegan

Spin Doctors
October 18 | 8 p.m.
It’s not just cult favorites like the Pixies that are reviving classic albums in a live setting. Onetime hit-makers the Spin Doctors are getting in on the action as well, playing their 1991 album Pocket Full of Kryptonite in its entirety, twenty years after its release.
Port City Music Hall | Portland | portcitymusichall.com

The Flaming Lips
October 24 | 7 p.m.
When the State Theatre reopened, music fans in Portland recounted tales of great shows they once saw at the esteemed venue, and a visit by the Oklahoma-based experimental-psych popsters the Flaming Lips frequently came up. This return trip (following a Nateva appearance last year) is sure to be a joyous occasion. Rising indie-folk stars Kurt Vile and the Violators start the night on a moody note.
The State Theatre | Portland | statetheatreportland.com