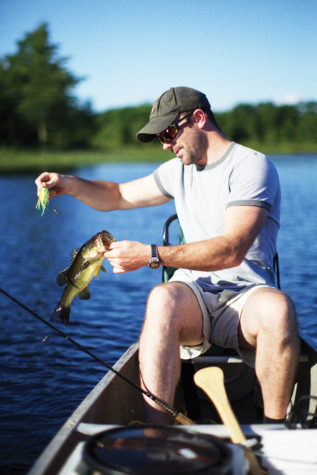 How did you first get into hunting and fishing?
For me, starting to hunt and fish were relatively easy endeavors, having grandfathers, a father, and an uncle who were all registered Maine guides and passionate about the outdoors. Shortly after I began walking, they helped me take the formal and informal steps in my outdoors training.

Do you make an effort to get young people outside?
Introducing kids and people who haven’t had a chance to get outside has really come full circle for me now that I have kids. I have a three-year-old and a five-year-old—two little boys—and they are amazing. We started identifying animal tracks, going out in the winter and chasing rabbits through the underbrush. I’m not killing anything in front of them because I think they’re too young to understand that. We do have a garden, though. They dig holes and water the tomato plants, and understand that things need to be cared for and nurtured in order to grow. These lessons are the basic building blocks of an understanding of the outdoors.

Do you plan to take your kids hunting when they’re older?
Eventually? Definitely. If they get into hunting and fishing, that’s great, but I’d never force it on them. I will provide all of the entry points, but if they don’t want to take it up, that’s up to them.

While spending time growing things, fishing, and hunting, you’re brushing up against some really important concepts, which seem to connect to your interest in teaching.
When we go to a supermarket and pick something off the shelf, we don’t think, “Where did this animal come from? Did it suffer?” Hunters understand what hard work it is to take an animal from the field and put it on the dinner table. We as a society aren’t passing these things on. We’re not teaching. With television, the Internet, smart phones, there are so many things pulling us out of the natural world.

And it’s so easy to take up something that’s merely entertaining, but these things don’t engage any critical parts of you.
Kids aren’t bored anymore. They’re always entertained. In an educational setting, unless the teacher is jumping on the desk and showing movies, they just can’t hold their students’ attention long enough to teach them anything. That’s really hard.

What, particularly, about hunting do you feel is getting lost?
I think there’s a certain amount of tradition and heritage that’s really important to hold on to. What I’d like to dump is the negative view of the hunter—the big, fat redneck drinking a Busch and riding around on a four-wheeler killing whatever he sees, not caring if animals suffer. Hunting is only 10 percent about harvesting an animal. The rest is about hanging out with your family and friends, and spending time afield enjoying Mother Nature and the quiet, self-reflective moments.