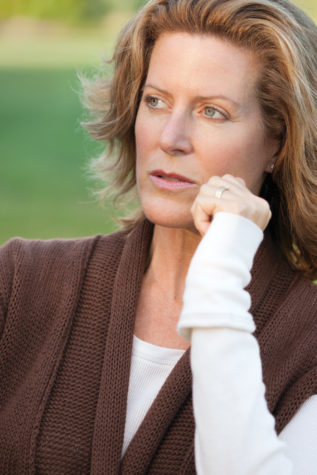 When I was a kid growing up in Bangor, I would turn the television to a quiet setting after my parents went to bed and leave it on through the night. I got in touch with emotions deep inside me. I would either be crying or laughing or simply mesmerized. I idolized actors—the greats like Dustin Hoffman and Sidney Poitier, and my favorite comedians: Dick Van Dyke, Carol Burnett, and Lucille Ball. I had a feeling, even back then, that I would be involved with films in my life.

How did you start directing and producing films?

I wanted to tell meaningful stories. And it just became clear to me: I was ready to create my own films. I needed some training, so I got it. I knocked on the door at MPBN and asked to job shadow a producer. After that experience I was offered freelance jobs. I produced segments for MPBN’s Made in Maine series, and that led to other opportunities. I also gave birth to my own production company, Wonder Dog Films, where I direct, produce, and edit films. My husband, Kevin, is most often cameraman.

What drew you to the documentary film genre?

The authenticity of documentaries is appealing to me. A joy in what I do is helping people to feel safe and comfortable so they can bear what’s inside of them. My job is to do something good with what they express, to honor the moments that we get to share and what they have to say. My business card and website reads, “Films from the soul.” That’s a very bold thing to say. Soul is a big word. I like to create from somewhere in that vicinity.

Do the stories appear in the editing process?

I sense when I’ve come across a good story. I go in with ideas of what I want and then I let the creative forces take over. I think intuition is my best guide. You must intellectualize to a certain degree, but when you try to perfect something that raw energy can get lost

Will you speak to the role of music in your films?

In one of my favorite films of all time, Harold and Maude, there’s that incredible scene where Bud Cort is driving in the rain with his head out the window and Cat Stevens is singing. I tell you, it blows me away every single time. I’m also passionate about music and the power it has to heal and transform. When I decided I’d like to work on a music video, I called my old singing teacher. He asked me if I’d heard of his son, Lyle Divinsky. When I listened to Lyle’s voice, I immediately got chills. We made two music videos together in a very short time. I put Lyle’s song “Push On,” in my film Liz.

Tell us more about Liz.

My film Liz screened at the Camden International Film Festival in 2010 as a short. A producer from Los Angeles came on board, and we brought it to HBO as a work in progress. Liz Leddy is a boxer from Maine who may very well make it into the Olympics. Mainly, though, Liz is a story about the human condition, the triumphant spirit that lives inside of us and propels us forward.

Have you found a supportive community in Maine?

Yes, I feel very supported. I’ve produced pieces for MPBN, for local clients, worked with my husband and some other artists. I’m collaborating with a group of creative and talented folks whose aim is to make films that bring out the raw emotions in people. I’m ready to spread my wings further. I’ve got my eye out for great writers, actors, and editors I can work with. Quirky comedies with a twist excite me at the moment. I see travel through work with non-governmental organizations on the horizon also.