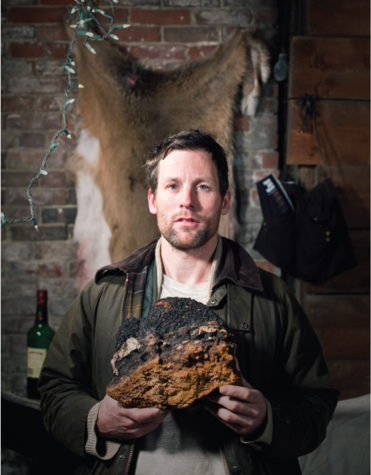 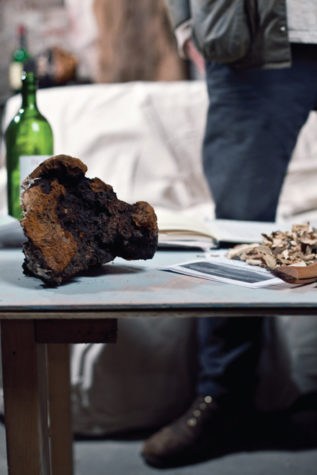 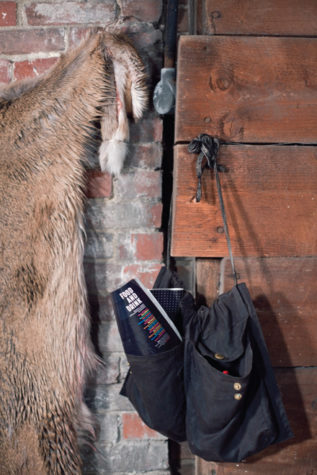 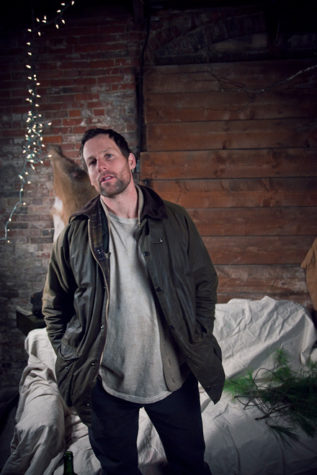 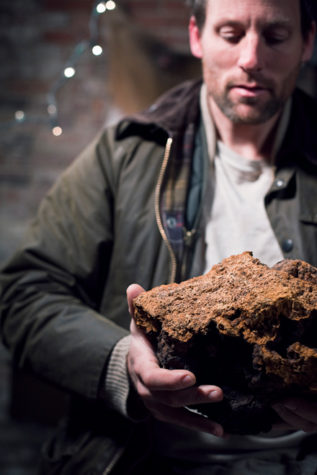 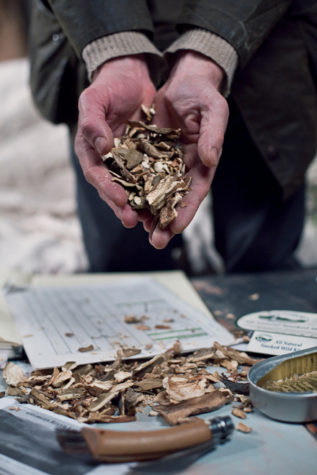 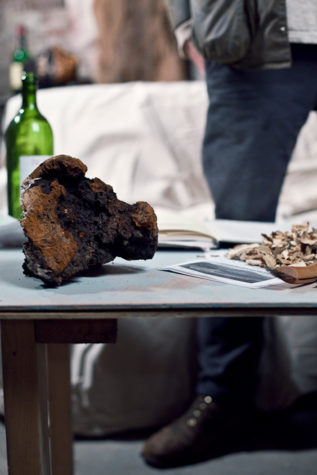 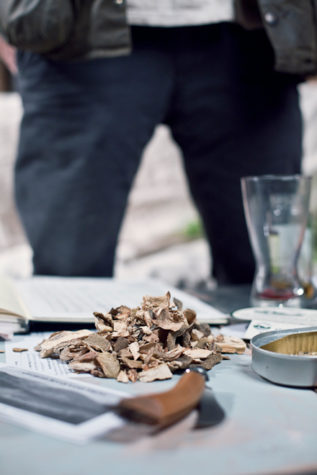 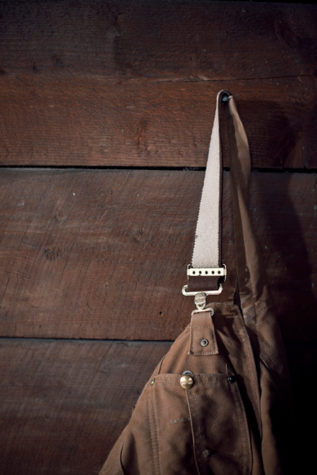 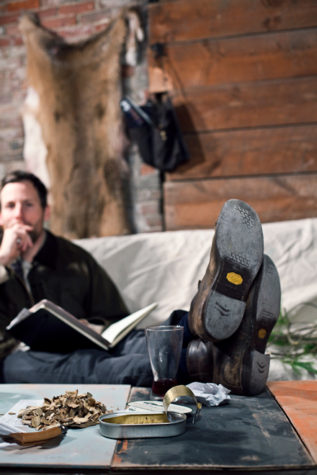 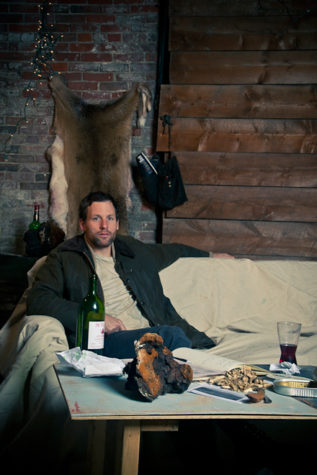 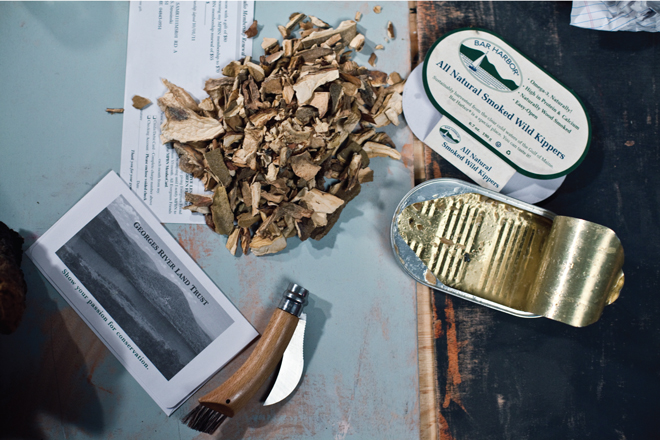 Tools of the trade: Dried Boletus edulis complex mushrooms, one of Strusinki's many knives (this was designed for picking certain mushrooms), a tin of kipper snacks ("my preferred lunch while working"), and material from the Georges River Land Trust, of which Strusinski is a member.

Seeking Evan Strusinski: In the footsteps of a world-class forager
He says enthusiasm is the best teacher. And in his exuberant, off-the-grid style, he’s teaching top chefs to see and taste in new ways.

Your eyes fly open. You shout it, finally, those magic words: “Ready or not here I come!” And you’re off, determined to find whoever’s in the woodshed, up a tree, under the porch, in the weeds, or behind the wheelbarrow. Your purpose is simple but absolute: you are the seeker; your sole mission is to unearth what’s hidden, to make the invisible visible. It is an ancient, perfect game.

Evan Strusinski is a man in his 30s, but he never stopped playing the game. He is a seeker. He lives for the hunt.

For the past seven years, foraging has been a major part of Strusinski’s life; for the last three years he has been doing it professionally. He is nearly single-handedly launching a wild-food movement in the region, inviting Mainers to try things we’ve never tried before. And he’s inspiring chefs, titillating palates, and gaining a national reputation for his work. Leaves, stems, flowers, fungi, weeds—the man sees edible possibilities in everything. He is bringing strange, sublime, bitter, sweet, uncanny tastes to our plates.

If you eat at Portland’s Miyake or Hugo’s, if you find yourself at Suzuki’s Sushi Bar in Rockland, or if you manage to score a table at one of Momofuku’s eateries in New York City, there’s a good chance you’ve come face-to-face with Evan’s indigents. Black locust blossoms. Sweetflag. Umbrella polypore. Wild garlic. (Ready or not here I come.)

A native Vermonter, Strusinski came to midcoast Maine seven years ago intending to stay just one winter. He began by working in the food industry, learning about local products and preparations. He worked for a series of restaurants and a few gardeners, including Eliot Coleman and Barbara Damrosch. Then he began foraging. At first for pleasure, and then for Primo, Francine Bistro, and Suzuki’s. Strusinski saw a trend coming, saw the public’s interest in wild foods growing, and so he began foraging for profit, moving beyond the midcoast—west to Vermont and down to Portland and New York. These days, he can do his work anywhere. Although famous New York chefs are clamoring for his services, he chooses to stay rooted in Maine.

“Friends kept me here,” he says in his calm, contemplative way. “And my relationship to this place is still being formed. It’s such a dynamic state—it continues to feel new. What keeps me stationed in Maine is the relationship I’ve made with my favorite spots. I’ve gotten to know the land through the ingredients.” Being away, he says, “feels problematic.” He sounds like he’s talking about a friend who’s been gone too long and failed to write.

What Maine spot, I want to know, does he feel most connected to?

Most connected? It’s as if I’ve asked a parent to choose a favorite child. “Rangeley, Moosehead Lake, Bold Coast, Portland, the coastal route…” He trails off. “The whole landscape is dear to me,” he explains. “I’m not looking at it through a picture window. I’ve consumed the things that grew there. I return annually to harvest. And through ingredients and places, I’ve made connections with people. This whole web of connection radiates from one center—a specific location.”

I sense a mystical quality in his speech, and I visualize his radiating web. If foraging is a religion, Strusinski is its hardscrabble priest.

Yet he’s a priest with earthly longings. What Strusinski most longs for these days is corn smut, a fungus that grows on corn. “It’s my current holy grail,” he says wistfully. I ask what corn smut tastes like and how he would prepare it, and I find it interesting that he doesn’t know. Strusinski doesn’t forage to satisfy a hunger for a particular food or to indulge his own cravings—he hunts for the hunt itself.

Ready or not here I come.

There’s another holy grail that whispers to him. “I want the roe of sunfish and pike,” he says with longing. He’s never eaten the roe of these particular fish, and that’s precisely the appeal. His interest seems born both from nostalgia and good old Yankee thrift. “Sunfish are what we’d throw back as kids,” he says. (You suspect, listening to him talk about sunfish or fishing with his father, that he dreams he could return to his childhood and collect that mystical roe that now feels so far away.)

And yet, in the hands of great chefs, the ugly and the ignored become extraordinary. Strusinski delivers the food without much fanfare, but the food is itself a nudge, a challenge to the chefs: I have brought it to you, now figure out how to transform it.

Andrew Taylor, chef de cuisine at Hugo’s, remembers the first time Strusinski delivered sweetflag (calamus root) to the restaurant. “He described it as his white whale…and was so incredibly thrilled to share it with me, and I’m sure every other chef he knows. What makes his approach unique is specifically that: his desire to share these things. He desperately wants to get these unique items into the hands of culinary professionals that can coax the best out of the ingredients.”

Is that what compels Strusinski to spend hours alone in the wilderness? A desire to share new food? To put wild ingredients into the hands of chefs hungry for the unconventional and esoteric? Partly. But it’s only half the story.

All that time on hands and knees, all the pulling, sniffing, seeking, all the cold and heat, the rough terrain, the solitude—what keeps him out there? It’s the same ineffable yearning that sets the child running in search of his friends. “It’s essentially a treasure hunt,” Strusinski says. “No different from a scavenger hunt or an Easter egg hunt. That natural childlike pursuit of the hidden gifts—that’s what it sprang from and that’s what it still is. A childish pursuit.”

Is it childlike? Is Strusinski just a kid who refused to come inside?

His enthusiasm is the kind people like to call “unbridled,” the term Karl Deuben of Miyake uses when he describes Evan’s energy. “Evan takes glee in foraging,” Deuben tells me. “Money never seems to be his focus. He seems to do it because he enjoys it.”

“It’s not business first,” Strusinski says. “It’s pleasure first. The best compliment I receive from chefs? That the things I’m sending are enlivening their kitchen. That, to me, is the payment I want. I’m driven to find things that give them a thrill. The way I see it, every job is monotonous. I want to break up the monotony of someone’s day.”

His ingredients are indeed an antidote to monotony. But they’re also far more: they reshape the way chefs approach their cuisine.

“I don’t want good ingredients to go to waste,” Strusinski explains, “and so I’m conservative about everything I do. I want [chefs] to use things with wormholes. If it tastes great, even if it doesn’t look great, it’s unacceptable not to use it.”

And when Strusinski delivers his ingredients—some of which chefs have never seen before—he likes to encourage them to play. “Sometimes I won’t even label it. [Chefs] won’t know what it is. Maybe they’ll ask me, which starts a conversation. Or maybe they’ll just play with it. I think it’s important for chefs to approach something without even a name. It’s a pure way of approaching a thing. Without a context, without being able to Google it, I think that chefs really want that experience. They want to be challenged in this way. Of course, chefs are control freaks who want a thing to behave like it’s supposed to—so there’s great tension between wanting control and wanting to be out of control. If I don’t label things, it gets chefs engaging in a basic way with food, encourages dialogue between chef and ingredient. It makes them rethink their relationship with food.”

His power to inspire and motivate top-tier chefs is a function, in part, of his outsider status, which Strusinski is savvy enough to protect.

“Foragers are considered tangential, wacky, maybe even peripheral characters. I’m given latitude that wouldn’t be given to other vendors. It goes along with the territory. Thank God! I can be slightly less dependable. After all, it’s not always easy to get something that may or may not be there in first place. I can show up during service with ingredients, where another vendor would be led out by the elbow. It fits me perfectly.”

Despite his savant-like presence, Strusinski is known as a generous member of his tribe. “He is willing to share his foraging knowledge,” Andrew Taylor of Hugo’s says. “This makes him very unique in this secretive world. I have gone foraging with him on several occasions, and he’s always trying to get me out into the woods more often to show me where toothwort or wild ginger or black locust flowers grow.”

It’s precisely this openness, curiosity, and longing that defines Strusinski.

“There’s nowhere I’ve yet been in every moment of every season,” he tells me. “I want to see a place in the course of its maturation. I might go to a place thinking I’ll find a certain mushroom. But I’m two weeks late or a week early. I leave and fantasize about that spot. I feel constant longing for spots. I always wonder what could have been…”

He makes me think of the words of Heraclitus: “You cannot step twice into the same river.”

You can’t, Strusinski agrees. “The land is mercurial, ephemeral. I’ll never go back to the place and find it the same way.”

When you think of it this way, there are thousands of Maines. Infinite Maines.

And if you can’t go back to the same place again, if you can’t count on anything remaining the same, you must be open to the whims of the land. You must make peace with forces much, much bigger than you are.

“Yes,” says Strusinki, sighing deeply. “Oh yes. And this is so maddening—and so sweet.”