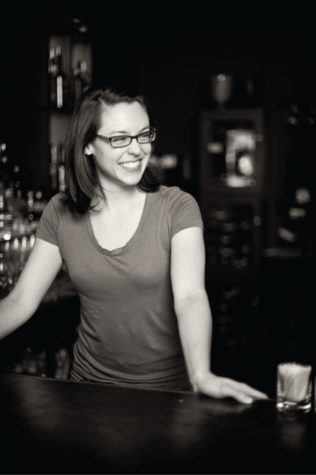 NAME: Roxanne Dragon
Age:  28
Occupation: Bar Manager at Hugo’s    How did you get started working in restaurants?
When I was 16, I started waiting tables in a family restaurant and worked in various restaurants after that to pick up quick cash here and there. When I decided to go to culinary school, more or less on a whim, I was exposed to a whole new world of fine dining. I thought I’d do something with cooking for a career, but that didn’t really click for me. I learned that there are all kinds of things you can do with a culinary degree, so I just kept my head down and tried to do things that I was excited about.

What drew you to bartending?

Initially, it was about covering a shift, but in my first week behind the bar I buried my head in every cocktail book I could find. I was hooked, and it took off from there. There is such a rich history surrounding cocktail culture. I like the idea that one can enjoy a cocktail that was popular in the 1920s that tastes exactly the same today.

How do you create a cocktail list that wows?

I like it when people ask questions or are skeptical about something that they’ve never heard of. I like to push people out of their comfort zone. If a guest is hesitant, I often say something along the lines of “I’d love to make that for you. If it’s not to your taste, no problem, we’ll toss it and try something else.” That way it feels like a conversation, not a drive-thru. I also try to be really conscious of matching the style and quality of the cocktails to the regular menu. I think that it’s important to keep in mind what the restaurant’s focus is and what we’re trying to do. In a restaurant of such caliber, cocktails cannot be an afterthought. They are another opportunity to wow people.

What are some of the standout drinks you serve at Hugo’s?

We try to make as much in-house as possible. I really love our house tonic. We use cane sugar, cinchona bark, lemongrass, and kaffir-lime leaf and carbonate it with a soda charger. It makes a gorgeous gin and tonic. We are starting to get some of the great vermouths and amaro from Italy into the state, so I have really enjoyed playing with what I call “grownup” cocktails—those with a more herbal, bitter, or savory flavor profile. A great example of that would be Coffee and Cigarettes.  It’s made with espresso-infused vodka, scotch, and Fernet-Branca, which is an intensely medicinal Italian liquor. Those flavors combine to produce a cocktail that hits you over the head. Our Bacon-Bourbon Old-Fashioned has become one of our standards. We infuse bourbon with bacon fat, strain it off, and use it to make a classic old-fashioned with bitters, orange, and maple syrup. As much as I’d like to, I can’t take credit for the creation of that one, but it’s a great example of where things are at right now—it’s a modern classic.

Do you have any special recommendations for Maine magazine readers?

I encourage people to stop by Hugo’s for happy hour. We’ve recently amped up the bar, revised our bar snack menu, and put more focus on the cocktail list. The response has been exceedingly positive. I hope to be a part of what pushes Portland forward in the cocktail scene. Our restaurants have garnered national acclaim—there’s no reason why we can’t be on par with Boston and New York in terms of quality, crafted cocktails. It’s exciting to be on the upswing.