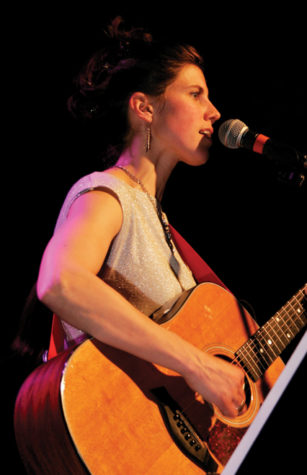 When Emilia Dahlin is in the room, it’s hard to pay attention to anyone else. Whether she’s singing or talking, her magnetic energy, the flash in her eyes, and the artfulness of her gestures captivate.

For our meeting, she arrives at the teahouse wearing layers of earth-toned cotton, with smooth earrings dangling from her ears and a smile that could melt snow. We share a potion of ginger and lavender, but I’m convinced that Dahlin calms me more than the tea. She’s a natural storyteller and a benevolent listener who is as comfortable with power tools and cameras as she is with guitars. Despite her numerous talents—or rather because of them—she chooses to make music.

Dahlin is drawn to the art form for its inherent generosity and ability to infuse people with shared feeling. So it is not surprising to hear that, when the business of being a musician started to overwhelm her art, she took off on a global service journey. That was back in 2009. Now resettled in Portland, the town she is quick to call home, Dahlin explains that the yearlong adventure—which brought her to the beaches of Southeast Asia and rough neighborhoods of Sao Paolo, Brazil—reminded her of what she already knew: music has the power to make people feel whole and happy and a part of something greater than themselves. For Dahlin, music is something as far-reaching as that, but it is something personal, too—the frustration felt when a song won’t come together and the joy when it finally does. Years ago, music filled her guitar case with cash on salty nights in the Old Port and, more recently, led her to share a stage with Ani DiFranco. Just as her life is a mixed bag of experiences, her music is an amalgamation of styles—folk, jazz, and samba, among others. Stories from her travels ride on rhythms that inspire clapping, toe tapping, and even dancing.

Dahlin’s passion for music began at a young age, in a farmhouse filled with her father’s collection of antique instruments. Piano was her first love, and she’s been feeling pulled back to those cool keys recently, even though she’s been devoted to the guitar for years. She’s also taken to the accordion and started strumming a ukulele. But then a singer like Dahlin is an instrument in and of herself. Her voice is clear and beautiful, but it also scrapes up emotion as it works its way through her body. She can intone a low pitch like a drum, sear a word with warmth, or let a note soar. And she can play everything from a solo acoustic folk set to lead vocals in a nine-piece band.

It’s like that with Emilia Dahlin: whether you’re talking with her or listening to her play music, you get a sense of her range. It’s hard to say what she will come out with next, but easy to bet that it will be good.

Learn more about Emilia’s most recent project, the Transcendence Project, at thetranscendenceproject.org