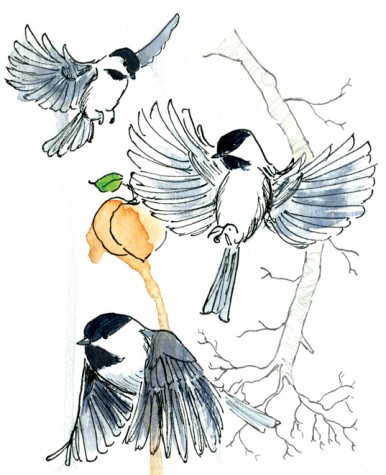 Along Route 1, the youth of Maine have cocked

their heads to hear the swarm of spring approach

on trucks from California’s almond farms.

commitment this far north, but there is mud

and pantries can’t be mopped up fast enough

for what comes in on duck boots and galoshes.

And it’s the same on 7 in Vermont

and 9G in New York—or so they claim,

that mixture of ocean salt and hoarfrost.

The children cock their heads but nothing comes,

while across Georgia, peaches are withheld,

words forgotten on the lips of blossoms.

This will be the silent summer. No buzz

will hover vibrantly. No tractors will

exhale a galaxy of pesticide,

above the quarry or bars on Smith Street.

The silence makes a sting most hearts were forced

to borrow from the old legends: those of

and ghost-towns. Once school is out, the children

will sweat sweetly in the luscious, fruitless

of decent posture and useful mischief.

Theirs will be a different, better sting,

an ache for what is present, not what’s past;

for what is racing ’round us, sticking close,

Maine magazine works in conjunction with students at the Maine College of Art. Illustration major Hannah Rosengren says of “Colony Collapse Disorder”: “I interpreted this poem as being about transition. As a Maine native I could easily picture the muddy fields and the approach of spring.”

Gabriel Fried on “Colony Collapse Disorder”: “I’d seen a documentary on colony collapse disorder—that eerie syndrome that causes afflicted bees to lose their homing impulse. I became fascinated by its tidal-wave impact beginning in the west and making its way east. You can’t get farther east than Maine.”