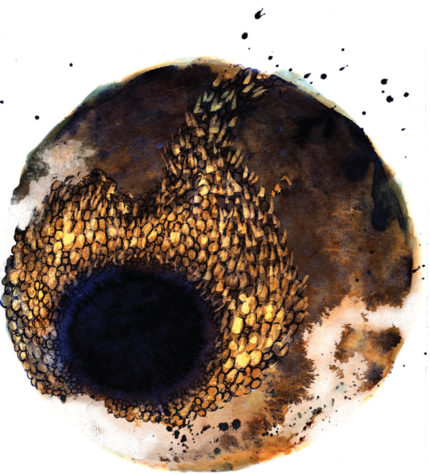 “Purge”
in the Bethel sauna

and pores engorged with gunk. And so Nance scrapes

with wooden blades, confides how mortified

she’d been in Turkish hamams, with her mess

to waists, and how she oozed, and how it reeks,

how vile, how badly you want to excuse

yourself—because it’s you fouling the steam,

your grime they breathe. Such sublime abuse,

the body’s humbling, such relief. We well,

Maine magazine works in conjunction with students at the Maine College of Art. Illustration major Sam Guay says of “Purge”: “The textures of churning, gritty mud come to mind, and at the end of the poem, the mud is washed away.”

Megan Grumbling on “Purge”: “Sweating in a dark sauna in the middle of the woods, a friend and I talked about bodies, the filth they can’t escape collecting, and finally the catharsis of being—however briefly—clean. Our musings found their way into this sonnet.”