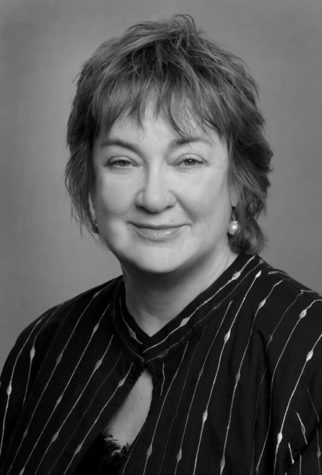 How did you get to know and work for President George H. W. Bush and Barbara Bush?

My background is in journalism. I was a news reporter for ten years, and the last newspaper I worked with was USA Today. I was part of USA Today’s election team in 1988, the year President Bush was elected president of the United States. One of the things we did that year was have Barbara Bush and Kitty Dukakis do a weekly column for us. I was the editor, so it was my duty to be sure they turned their columns in to me every Sunday night and to edit them to make sure they would fit the news hole. Anyway, I got to know the women very well. After the election, much to my surprise, Barbara Bush’s chief of staff offered me a job in her press office.

How did you advance to the position of chief of staff to President Bush?

In 1993, I went with the family back to Texas to help Mrs. Bush write her book. When we got done with that project, President Bush’s then chief of staff decided to retire. He asked me—and this is an absolutely true story—if I would stay on and be his acting chief of staff until he figured out what he wanted to do. We haven’t talked about it since. That was in 1994. I guess any day now he might walk in my office and say, ‘Oh, I’ve hired a chief of staff.’ Anyway, it’s been a lot of fun. I keep thinking that one day I’ll walk in the office and there will be nothing to do, and I’ll know it’s time to move on—but it hasn’t happened yet. I haven’t gotten bored in 20 years.

Do you ever wonder what you might have done if things hadn’t played out the way they did?

I probably would have gone back to being a newspaper reporter. I almost quit my job seven or eight years ago because I was offered a job as an op-ed columnist for a newspaper in Atlanta. You know, it’s every reporter’s dream to have their own column. I sort of agonized about it, and then I woke up one day and thought, ‘What am I doing? I have the best gig in the world.’ With that job opportunity, I definitely did the classic get out the yellow pad and write down the pluses and minuses of coming, leaving, staying. Spending five months of my life in Maine? That’s huge! I wasn’t prepared to give my job up or give up those five months in Maine, with all due respect to the Atlanta newspaper.

How does your job change from the Houston office to Kennebunkport office?

A lot people ask me that and the answer is sort of silly. It mainly changes by what I wear. Now I’m wearing navy blue pants and a sort of a suit, and in Maine I have on jeans and capris and a T-shirt—I dress very casual in Maine. The work doesn’t change very much, though.

What else is different about small-town life?

I love that for five months I get to live in a small town. It takes me back to my roots. You know, everything takes longer in Kennebunkport—grocery shopping, walking—because you’re going to run into someone you know. I can run my errands in about half the time in Houston because there isn’t all that chatting going on. But I love that. It’s very fun. I also love giving dinner parties in Maine. It’s very fun to gather interesting people around the table. It’s one of my favorite things to do, to get some lobster and clam chowder and just listen to what’s on peoples’ minds.

IT MAKES SENSE THAT YOU ENJOY THE KENNEBUNKPORT FESTIVAL SO MUCH.

It does! I have a group of friends from Texas who started coming every year. Every night we go somewhere new and fun. And of course the food’s exquisite. Everyone wants to come to Maine in July and August, but I try to push them to come in June or September because it’s less crowded. You can just own the town. I think the festival is slowly but surely introducing a whole different group of individuals to Kennebunkport at a different time of year.