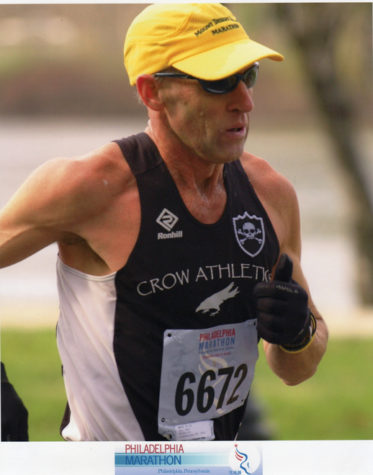 Maine native Gary Allen is one of 30 individuals who has run a sub-three-hour marathon in five consecutive decades. He’s also the founder of the Mount Desert Island Marathon and the Great Cranberry Island Ultra Marathon. And he’s the guy you might see running in a Santa suit come December.

You grew up on Great Cranberry Island?

I did. My family first settled out there back in the 1650s, so I’m twelfth generation. You make do with what you have when you live on a Maine island. I think the idea of being an athlete figures in to a lot of kids’ lives, but it was never easy to play team sports on the island—there simply weren’t enough kids. Running is something you can do on your own, even on a small island where the road is only two miles long. I started running at age 12 or 13, loved it, and have been doing it ever since.

Did the limitations of the island frustrate you?

When I was running on Cranberry all that time it wasn’t “Where will I run?”; it was “How far will I run?” It made me really strong mentally. Over the years, I’ve run tens of thousands of miles up and down that road. At one point, I thought, “Well, if it’s good enough for me to run up and down this island, maybe it will be good enough for others.” We started the ultra-marathon out there hoping to give some good energy to the island. This will be the sixth edition coming up in July.

The Mount Desert Island Marathon, which you founded in 2002, has also been remarkably successful—it was voted the “most scenic” marathon by Runners World. What inspired you to start the marathon?

In 1980, I went down to run in the New York City marathon. I was absolutely blown away by the spectacle and excitement of it. Moments before the cannon started to set us in motion, a light bulb went off and I thought, “I need to start a marathon in Maine.” All through the streets that day I sort of felt like my feet didn’t touch the pavement. I was so excited by the thought that I had at the start, and by the excitement of running through the streets of New York—it seemed so liberating compared to running up and down the island.

How did you determine the path the marathon would take through MDI?

A lot of marathons held throughout the United States feel contrived. It’s almost like they’ve made loops to add up to the 26.2 miles just to satisfy the distance. I really wanted to satisfy the spirit of marathoning and make people really feel like they were on a journey. I wanted them to feel like every step put them into a new place, into a new world.

How has running made you experience the world differently?

You know, wherever I go, I always put my running shoes in my carry-on bag with me because I can’t risk losing my running shoes. When we were in Puerto Rico last winter, I ran pre-sunrise a lot because it was so hot there. Just to hear the morning sounds, the dogs, and the roosters crowing in that tropical environment. Everything from that to running when it’s 10 or 15 below zero in Maine. Layering up, going out. When there’s the perfect layer of snow your shoes actually squeak when you’re running.

What advice do you offer aspiring marathoners?

I think that sometimes people get a little too caught up in the world we live in, where everything is scheduled down to a tee. Suddenly, running becomes another job. When I feel really good, I run a lot farther. When I don’t feel that good, I run a lot less. What I encourage people to do is become a chef with their running. The ingredients are not that complicated—you learn to add them by instinct.