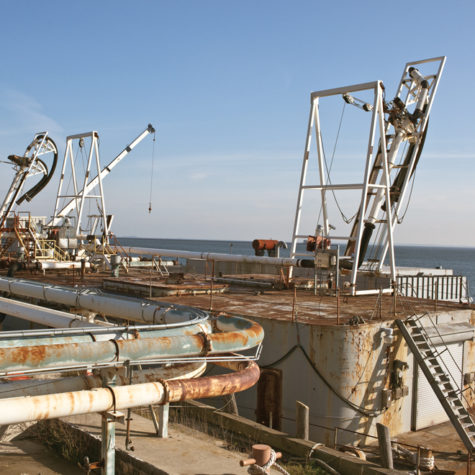 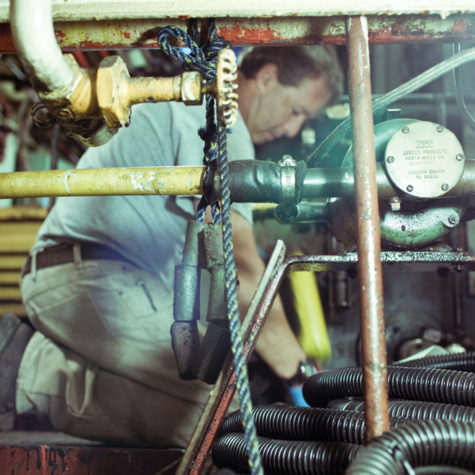 Engineer Efi Marine preparing for the trip in the engine room. 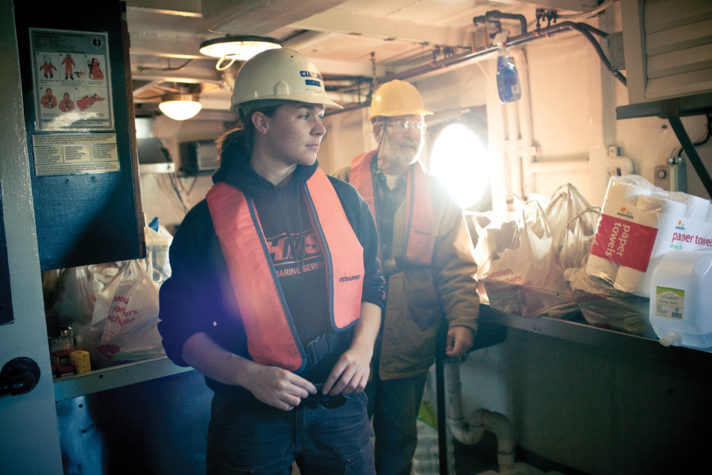 Hartley in the galley with mate Steve Burt for a pre-trip briefing. 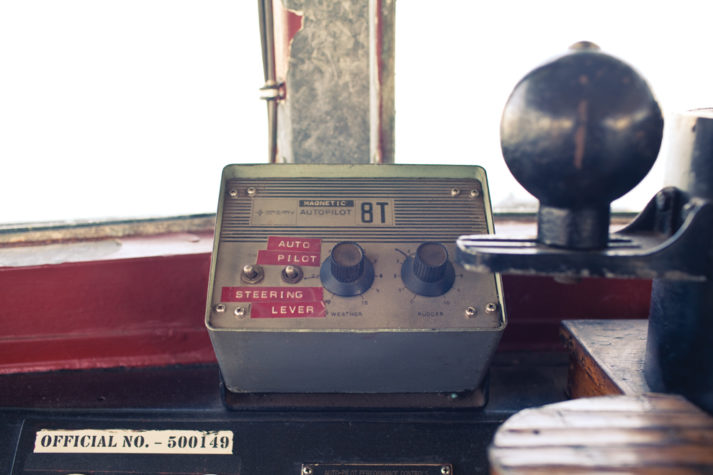 The wheelhouse of the Narragansett 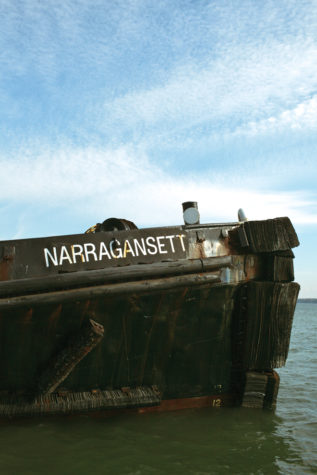 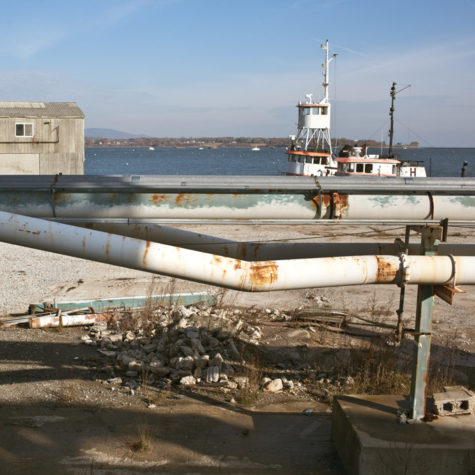 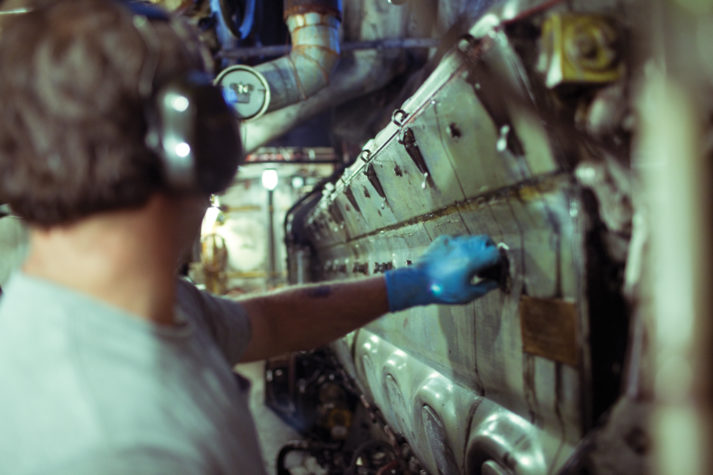 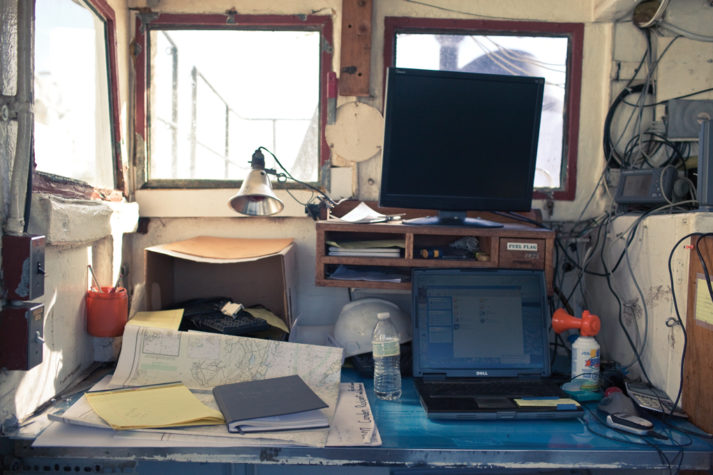 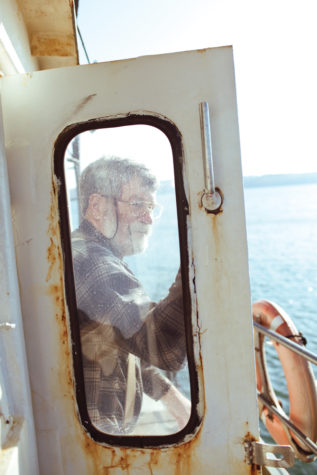 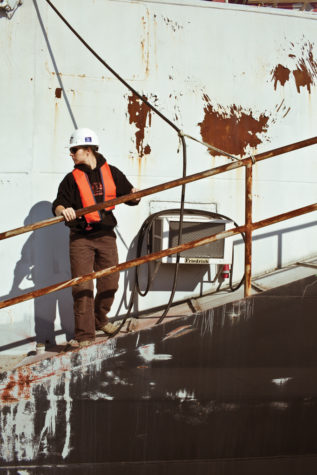 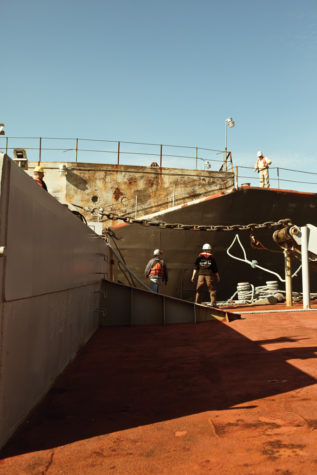 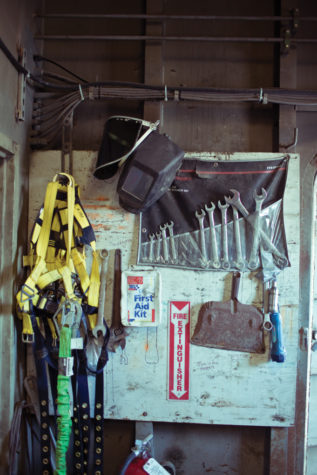 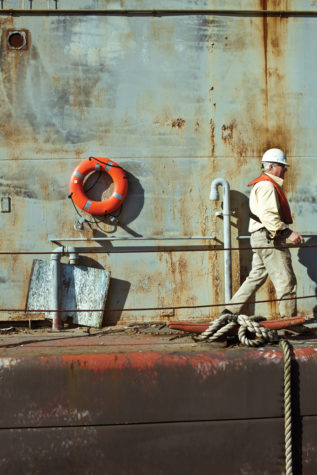 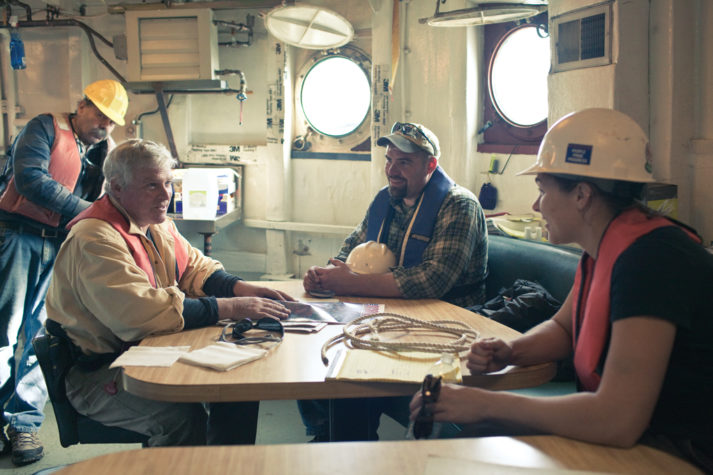 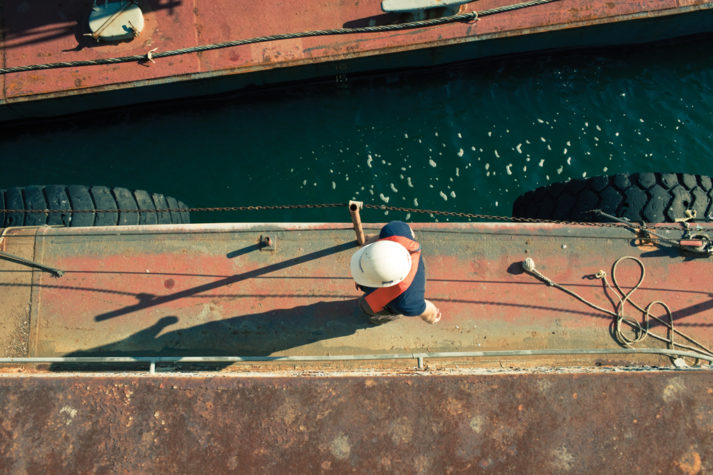 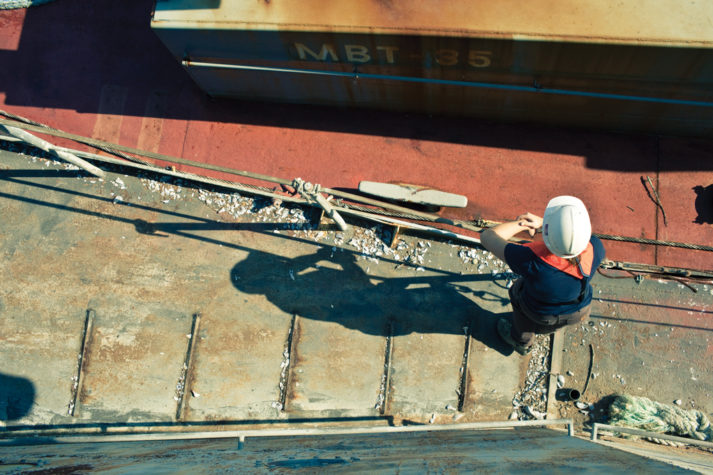 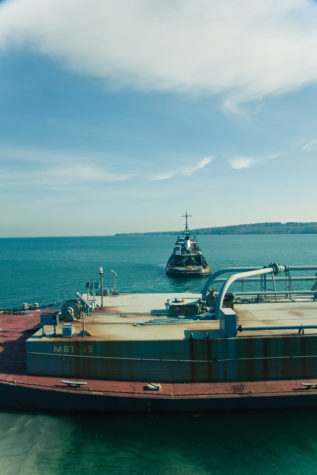 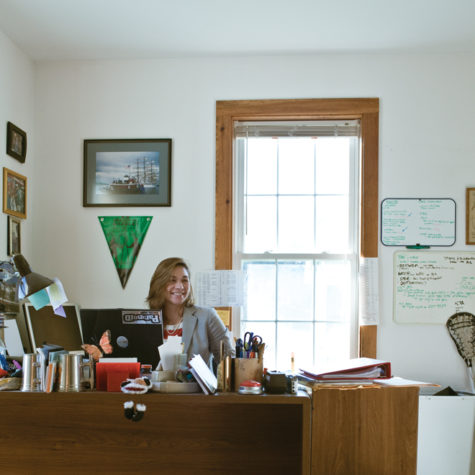 The story of how one extraordinary young woman lost her father, saved his company, AND LEARNED TO TRUST HERSELF.

As a girl growing up in Boothbay Harbor, Kelsy Hartley treasured the souvenirs her father brought home for her and her two younger sisters, Sonni and Ali. As a merchant marine, Gregg Hartley returned bearing gifts from foreign shores: tiny dolls from Nicaragua, masks from Africa, carvings from Peru, little boxes from Chile, and colorful currency and oddly shaped coins from all over the world. Turned over and over in small hands, the objects must have offered a first taste of wanderlust.

Kelsy’s father founded Hartley Marine Services, a tug business, while his daughter enjoyed a childhood filled with sportslots of them, including field hockey, track, swimming, and horseback riding. Later, she rowed crew in college. During summer vacations between odd jobs and while on semesters abroad, she traveled in Italy, Ireland, and France, where she studied a language she was intent on mastering.

Gregg Hartley started his business with one tug, eventually acquiring five vessels. The company, specializing in dry-bulk transportation, flourished, but like many children, Kelsy was unsure of exactly what her father did. She remembers him at her field hockey games taking calls from multiple cell phones. Sometimes, he was even on both of them at once. “He tried to keep work at bay when he was with us. Dad was proud of his success, but never flaunted it. I think he took pride in wearing beat-up jeans and a scruffy T-shirt to work. He loved being self-made and not having to wear a tie every day.”

But as devoted as he was to his company, Kelsy says her father always made time for his daughters. “He taught us how to fish and go camping. I used to love flying with him.” Her childhood is rich with memories of him at tug musters, sporting events, afternoon boat rides, and air shows.

In July 2007 at the age of 54, Gregg Hartley, an experienced pilot on the sea and in the air, was piloting his company’s Piper PA-32, a small single-propeller airplane, when he encountered what his daughter describes as “an intense, unpredicted microburst.” He was accompanied by Timothy Ladd, 59, a mechanical subcontractor. Both men perished when the plane went down.

Kelsy, who had since graduated from the University of Vermont as a French major, was returning to Maine after completing an art internship in California. At 24, she had never worked anywhere for more than three monthsmainly summer jobs as a waitress, a barista, and a steward at the Boothbay Harbor Yacht Club. So it was all the more surprising, in the wake of the accident, that she made the courageous decision to take over her father’s company.

Mike Welch, the operations manager of Hartley Marine Services since 2008, explains the situation that befell the company after Gregg Hartley’s demise: “His tragic and untimely death by all accounts should have brought about the end of business. Everyone in the industry was simply waiting for the inevitable auction of the pieces.”

Kelsy was determined not to let that happen. But there was no will, no how-to booklet, and many things to tie up with the estate. “I started showing up at the office. I had no idea what I was doing, but figured I could somehow lighten the load of the two staff remaining. I also think that the company and the office were as close as I could get to Dad, so it was a way for me to connect with him.”

Welch describes it this way: “Enter his eldest daughter, Kelsy, fresh out of liberal arts college, diligently protected from the depravations of the working waterfront by her father who not only didn’t allow his daughters’ participation in the business, but actively prevented it. Out of love for her father and the pride he had in his business, and to continue the critical means of support for her sisters and mother, Kelsy stepped up with the decision to take over operations of HMS.”

Kelsy’s learning curve was steep, whether she was running parts to and from the tugs or tackling the more difficult tasks such as establishing business relationships and developing future plans. “Eventually,” she says, “I began to find strength in trusting my instincts.” She focused on the logistics of organizing the schedules for the captain, first mate, engineer, and deckhand of the boats. At the time of the accident, Hartley Marine had two contracts towing dry-bulk cementone in New York and one in Rockland.

Hartley refers to tugs as the “workhorses of the waterfront.” She offers an analogy. “Kind of how an ant can carry many hundreds of times its own weight, a tug is designed to push, pull, tug, and tow objects much larger than itself,” she says. “It makes objects, such as a barge, mobile, and a ship more maneuverable. A tug will help a ship through a tight area and make a huge amount of product or structures that may not fit on the roads transportable.”

As she rattles off these characteristics with ease, I marvel over this twenty-something former art intern who has, in short order, turned herself into the president of a thriving maritime company. In person, Kelsy has a warm presence with a blue-eyed gaze and a frank, self-deprecating sense of humor. She exudes a physical confidence clearly honed through all her years of sportswhat the French call bien dans sa peau, a phrase that could easily roll off the tongue of this fluent French speaker. Kelsy thinks nothing of hopping in the car to drive across the country; she has done so twice. She recently returned from learning, just for the heck of it, to kiteboard in the Florida Keys. Last summer, she bought a motorcycle. My guess is that those youthful days of flying and sailing with her fatherand the feeling of absolute freedom in both the sea and the air they must’ve given herhave carried through into her adult life, in physical daring and sheer guts, both of which must have served her well when she took over her father’s company.

Shortly after joining Hartley Marine Services, Kelsy realized a veteran employee, who likely saw himself as the inheritor of her father’s title, was withholding critical information and behaving in a way that was incompatible with the company’s vision. In a bold move, she fired him. At that point, it was just Kelsy and office manager Ann Reed in charge of the business. “There were no males in the company, and it was in the hands of a 24year-old. I think that our clients were nervous.” It was an important lesson in learning to trust her intuition.

“What Kelsy might have lacked in experience in tug operations,” Welch says, “she more than made up for with good judgment, good business sense . . . and a willingness to do what it takes to get the job done, even when it’s standing on a stormy, freezing pier in the middle of the night waiting to catch the lines for a returning boat and welcome the crew home.”

But despite her dedication, Hartley Marine and its young president were soon faced with yet another challengethe recession. In May 2009, the company lost its New York contract and was forced to let half of its employees go. Undeterred, Hartley hunkered down and focused on their Boston run. “It takes three to four days for a tug to drive from Rockland to Boston with a four-thousand-ton barge full of approximately 60 railroad cars of powdered cement from the Thomaston quarry.”

Eventually, Hartley says she understood that it was all right if she did things differently than her father. It was a revelationand a relief. “It gave me a bit more ownership of the company, just realizing that I had different strengths than he didthat just because he did it one way doesn’t mean I have to do it that way,” says Hartley. “Inheriting a company is a little unsettling. It doesn’t ever feel deserved.”

Optimistic and energetic, Hartley says the time she spent traveling abroad taught her resourcefulness. “When you’re in a new area you get really creative finding what you need, and I think that that also applies to the business world. Because I didn’t have this business background I got really good at finding people to answer my questions. I’m still not at all afraid to just pick up the phone and call anybody and everyone about everything.”

However, Hartley has managed to do more than simply keep the company and its fleet, quite literally, afloat. In 2009, she sold two of the company’s tugs, the Fannie J and the Bath, to an operation in Haiti just before the earthquake. The boats have not only remained in operation, but they have been instrumental in helping to rebuild Port-au-Prince.

Currently, Hartley is focused on the development of the company and researching new outlets for expansion. Hartley Marine’s three remaining tugsthe Narragansett, Penobscot, and Seguinare single-screw engine boats of two- to three-thousand horsepower and can carry dry bulk only. Hartley aims to acquire a twin-screw boata more maneuverable, twin-engine vessel that would allow the company to take on oil-shipping contracts.

Hartley Marine’s captain, Taylor Apollonio, who began working with Gregg Hartley while in his twenties, is now in his late-thirties and has earned an unlimited pilot’s license that allows him to captain every type of vessel in all ports and waters. Kelsy considers him the company’s “anchor.” He’s “like the son my father never had,” she says. It’s a description that seems fitting for this family business that consists of only three administrative staff and a permanent crew of four members.

Hartley Marine has since joined the union in New York and is now a certified woman-owned company in three statesa distinction for which Hartley is rightfully proud.

Ann Reed, office manager since 1998, has known Kelsy since she was 14 years old. According to Reed, the apple didn’t fall far from the tree. “She has not been afraid to jump in and took over the entire task of getting the business its ‘women-owned’ status,” she says. “Switching from a male proprietorship to female has changed the way the marine world looks at Hartley Marine. HMS has shown that we’re not going to lie down and will continue to be of service to the marine transportation business.”

Throughout the transition, Kelsy has found great support in Boothbay Harbor. “It’s a hard-working community bound together by the onslaught of summer tourists and an intense three-month season to make a living. I think those summers I worked had a profound effect on everything I do. Working outside, close to the water, linked me to the waterfront and the people who were drawn to it.”

Shortly after her father’s death, the town honored Gregg Hartley with a boat parade.

“Everyone in a lobster boat, skiff, yacht, anything that floats, circled the harbor. I think that was when I knew that it was possible to survive such a painful experience. There was so much love everywhere,” Kelsy recalls. “My dad would have been happy and honored in that moment. At the reception after, I remember thinking he was missing the best party of his lifeit was a celebration of his life that night.”