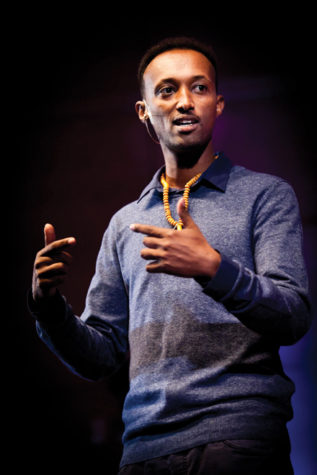 Mohammed Dini lived in Somalia and Kenya before moving with his family to Portland in 1997. In 2010, Dini ran in the Democratic primary for the position of state representative for District 119, capturing 40 percent of the primary vote. He lost the 2010 election but remains committed to serving the community. His latest project is a publication called Portland Forward, which features stories written by immigrants who have relocated to Maine.

In your TEDxDirigo talk, you shared a Somali word, furfurnaan, that means “openness.” How does this concept come into play in your life?

I think when individuals begin to put that word into practice, you will see a change in tone within the community. A friend of mine who works at Whole Foods was asked by a customer, “What does halal mean?” He replied, “It’s like kosher,” and the customer got it right away. The customer thanked him, and continued, “It kept circling around in my head. I didn’t want to offend anyone in asking the question.” It’s a simple question, but he was afraid of offending. Openness has to come from your heart.

Being open puts you in a vulnerable position—you can never be sure how the person you’re interacting with will respond.

Very true indeed. I find that some people in Portland will not always tell you how they feel because of that vulnerability. They will, however, tell you what they think is the politically correct thing to say. Even if they don’t like you, they will try to conceal that. And I get that—it’s part of the New England culture. It’s surprising that even though I embrace New England lifestyle, there are things I like about the south. On my travels in the south, I have met individuals who will bluntly respond to you, and at times even explode in your face. You might engage in heated debates with them, and, in the end, you might end up never talking again or you might even end up becoming good friends. The reason I’m saying this is that there are many issues that could be resolved in Portland if people would embrace furfurnaan. Overall, there’s something unique about our city, and Maine in general. Mainers are great people and I am glad to be part of them.

You ran for the Maine State Legislature in 2010. Can you share some of that experience with us?

During the primary, I tried not to take any of the feedback I heard as a negative. It was a positive challenge, and I began to realize that I was making a difference, that people who have felt like they don’t have a place in this city were starting to feel like they are actually Portlanders, Mainers, that they had a chance to make their voice heard by voting. Forget the 40 percent—if I hadn’t gotten a single vote, I still would have felt inspired.

Is there a particular story from the election that stands out to you?

One constituent was so funny. He changed my life. When I knocked on his door, he approached me with so much ignorance: “What do you want? Why don’t you get out of my door?” The conversation started out awkward, and you might say it turned racist if you don’t believe in furfurnaan. His wife came to the door, and though she behaved more nicely, in some sense she shared certain opinions of immigrants that she’d learned from the papers and television. I sat in their house for hours and our conversation went deep. After I talked to them, he put my sign on his house yard. I might have walked away from his door thinking, this guy is a racist, this guy is a hater, but this guy never experienced a black person knocking on his door. The culture of furfurnaan is saying what you honestly feel. And not only because people want to hear it, but because it’s healthy for you as well.