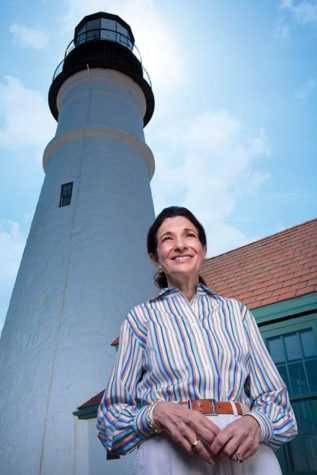 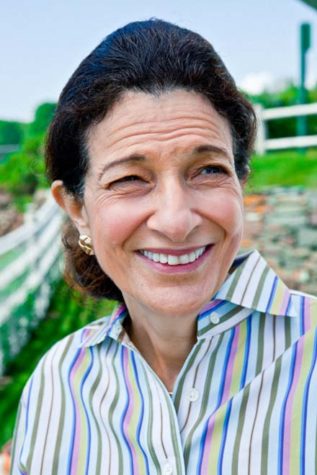 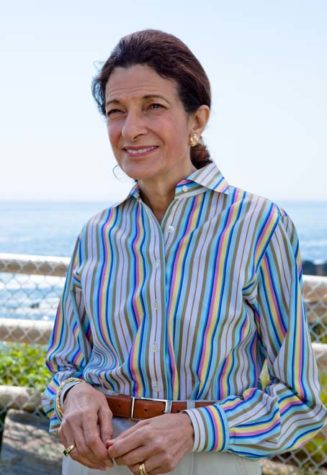 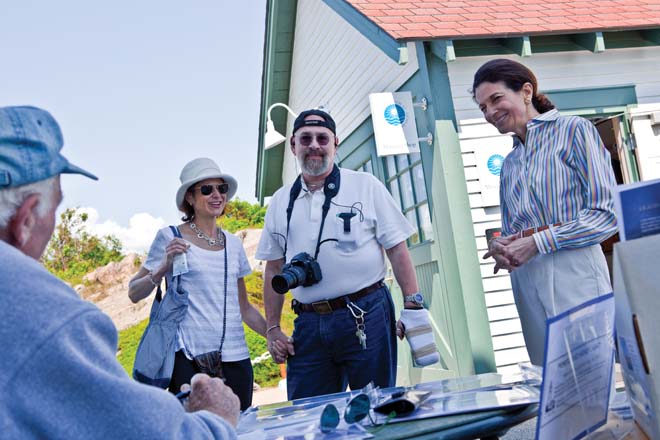 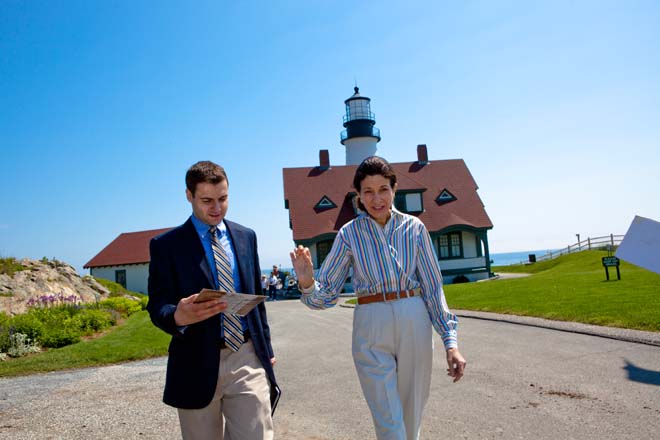 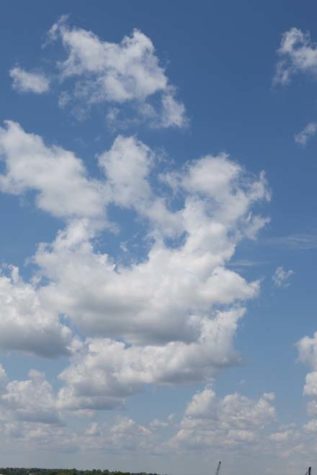 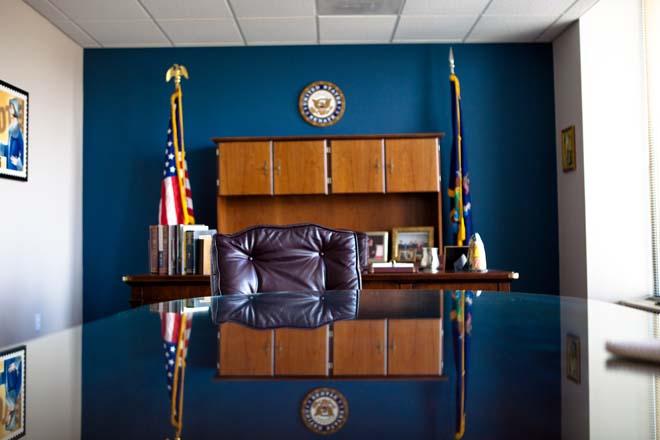 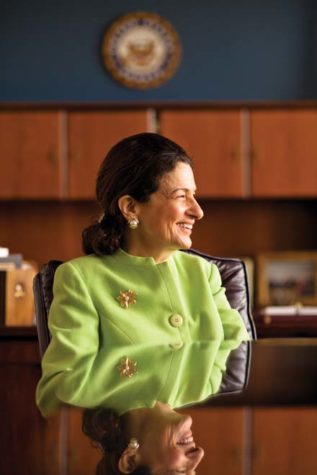 In the waiting room of Snowes Portland office. In my generation, Snowe says, we believed in getting involved. 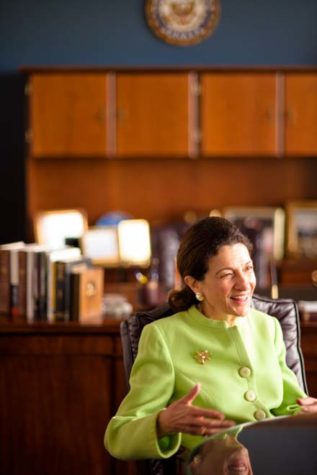 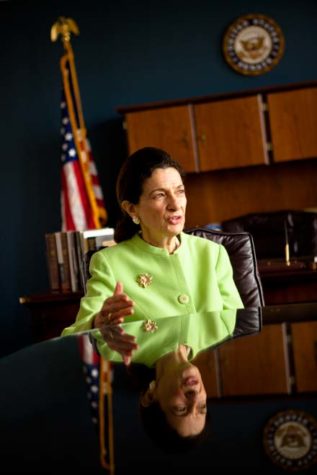 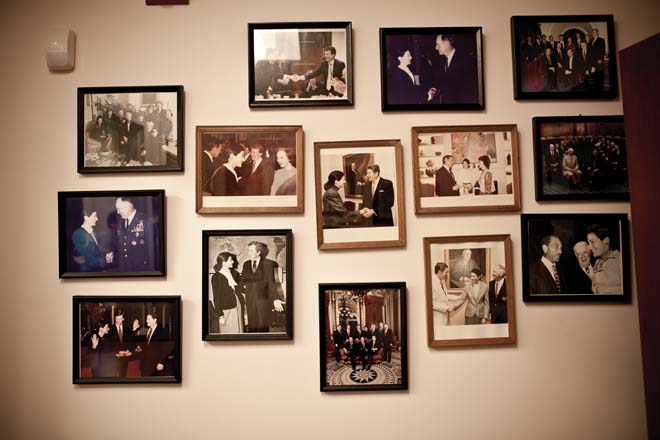 It’s the last day of May. The Portland Head Light parking lot is dappled with wandering tourists. Beyond them, a gang of shirtless high school boys spreads mulch for a community-service project. It’s been raining for three days and the sky is still gauzy with clouds and fog. To the east, the Atlantic horizon seems even more infinite than usual. A mournful foghorn sounds in the near distance. Between solemn blasts, the silence is broken by the aimless caws of a windblown flock of gulls.

A white minivan with government plates pulls into the parking lot. The clouds shift and break as U.S. Senator Olympia Snowe steps out of the van. Snowe is wearing a sweater over her shoulders and her black hair in a single ponytail. She brings a flat hand to her brow, as if to salute the rising sunlight. “Beautiful,” she says. “Just beautiful.”

Bill Thomson, a seascape painter from York, is the first to notice Snowe’s arrival. “Hey, Olympia!” Thomson says. “You getting to relax a little bit now that you don’t have to go down to Washington and tell all those old guys what to do?”

“Well, I’m not done yet,” she says, studying Thomson’s work. “Now it’s time to solve the problems from the outside.”

Thomson offers Snowe a painting “as a gift” for all her hard work. Snowe thanks Thomson, then holds up a finger and says, “I’ll get one on the way out.”

Eight months ago, on February 27, Senator Snowe announced her decision not to run for a third consecutive term in Congress. Though her reasons for leaving made sense—she cited rancorous and unproductive partisan gridlock—the news of her resignation set off a national media typhoon. Long known for taking a centrist stance on America’s most divisive issues, Snowe has come to represent a set of transcendent Maine values: self-reliance, independence, and the ability to overcome ego and petty hang-ups in the name of practical solutions and higher service. One month from now, Maine will elect a new senator to fill Snowe’s seat. In January, her term will expire. Ever since her resignation, a lot of Mainers—including this one—have been feeling anxious about what’s to come.

While Snowe poses for a professional photographer—hands in pockets, the kind but serious face of someone who would rather be working—tourists snap photos. Between shots, a woman from Ohio says, “I want to shake your hand. We’re from Cleveland, but we know all about you.” A woman from New York asks her husband to take a picture of her with “the senator.” Another woman who works at the Head Light gift shop leaves her post momentarily to tell Snowe that “my son’s a die-hard liberal, but when I told him the news, he said, ‘No, Mom! She’s exactly the kind of person we need!'” Snowe, a lifelong Republican, responds to each of the women in the same way: “Well, now it’s time to solve problems from the outside.”

Behind Snowe, assistants and aides tap out messages on Blackberries; beside her, the photographer adjusts light screens and umbrellas. Snowe casually runs through a brief history of Portland Head Light. “First earmark in public spending,” she says, and then tells us that it was the grandfather of her husband—former congressman and governor John McKernan—who commissioned the lighthouse preservation project. Snowe takes her hands out of her pockets, folds and unfolds her arms, and subtly gestures to the lighthouse peak. “I love history.”

I’m sitting in the waiting room of Snowe’s office in downtown Portland a few minutes before noon. Campaign signs from elections past hang on the walls alongside photographs of Senator Snowe with Ronald Reagan, next to Hilary Clinton, and on the cover of Working Woman magazine from 1983. Snowe has never lost an election in the nearly four decades she’s served as a Maine politician. Her career is loaded with more superlative honors—youngest, first, most, only—than one need mention.

The night before, I spent several hours watching videos of Snowe in action. My favorite footage was a clip of Snowe, as a senior member of the Senate Committee on Finance, questioning Secretary of the Treasury Timothy Geithner’s budget proposal. Her central point was that the new budget proposal didn’t address one of the “persistent problems facing this country.” She identified the problem as a “lack of confidence about the future.” For the next several minutes, Snowe repeated the words “confidence” and “future” about a dozen times.

The walls of Snowe’s Portland office are federal blue. The view through the south-facing windows—an office building on Union Street—is unimpressive. The Maine and American flags hang from poles on either side of a desk. A plaque from the United Bikers of Maine and a folded blue Facebook T-shirt sit atop a stuffed trophy case. A large framed stamp hangs on the wall commemorating the centennial of the nineteenth amendment.

Snowe sits at the head of a large wooden table. In her office, in work clothes, away from the easy beauty of Portland Head Light, Snowe seems more herself—less high-profile politician and more a daughter of Greek immigrants.

“You can’t divorce yourself from your heritage,” Snowe tells me. “It’s what makes you tick. From my Greek side, I get my work ethic, my passion, survival, perseverance.”

Though her family is from Sparta, Snowe tells me a story of the colleague who gave her a bust of a war-helmeted Pericles. “I know he’s from Athens, but sometimes I feel like I should put on that helmet when I go to work,” Snowe says. “In politics, you almost have to be warrior-like.” But Snowe believes that her Maine heritage is what gives her the ability to “go solo,” as she calls it.

“Maine is like a big family to me,” she says. “We’re all about independence.” To Snowe, though, independence doesn’t imply that Maine people live in isolation from the rest of the world. “Mainers are very macro in their worldview,” she says, then recalls a recent trip she took to several towns in Somerset County. “The people wanted to talk about Latin America just as much as they did their own town meetings. They wanted to know what was going on overseas. Mainers like to be involved, and they like to have an opinion.”

She’s right: following her resignation, many Mainers felt that the loss of one of our state’s most iconic public figures was bittersweet, if not somehow demoralizing. If Olympia couldn’t get it done, who could?

But of her resignation, Snowe says, “It was never about relief.” Though she sometimes feels that “every day I’m saying goodbye,” Snowe considers this moment of her career a “traversing period” rather than an end. “What I kept telling people in Washington was that you need to get up and start talking to people across the aisle because neither side has 60 votes. We could have done so much more. In our churches, in our communities, in our families—we need to start rewarding the people who can build bridges. Because that’s what’s at stake.”

Somehow Snowe’s shrewd optimism doesn’t feel cheap or insincerely hopeful. After losing both parents before the age of 12, Snowe attended a Greek Orthodox boarding school in New York until the ninth grade. She graduated from Auburn High School and studied political science at the University of Maine. Her first husband, state legislator Peter Snowe, died in a car accident when she was 26. That same year, Snowe ran for her late husband’s seat and won in a landslide victory. For Snowe, it seems that hope is a personal commandment.

“I believe in work,” Snowe says. “I believe in discipline and focus. At any point in my journey, I could have derailed. But you have to recognize that what can feel very negative in your life is also an opportunity to be positive.”

It’s after one o’clock when Snowe’s aides knock—for the third or fourth time—to tell her that our meeting needs to end. As she sees me to the door, it’s difficult not to feel that her innocent farewell carries more meaning: here I am shaking Olympia Snowe’s hand, and here she is watching me leave, and there is her staff standing next to her, waiting—like all the rest of us—to see what’s next.

On my way through the waiting room, I glance at the photos on the wall, the old campaign signs. In the elevator, I find myself recalling a moment from earlier that morning, when Snowe, on her way back to the minivan, made good on her promise to Bill Thomson. It was not a simple exchange.

“You pick one,” Thomson said, pointing to his table of painted seascapes.

Olympia studied the paintings. “You pick one for me,” she replied.

Thomson gestured to the two most popular paintings. Snowe, after some deliberation, picked the one of a small skiff impossibly moored beneath the cliffs of Portland Head Light, where large swells bashed against the rocks and rolled back out to sea toward a dusk-lit horizon.

The boat in the picture was nameless, but Thomson explained that he typically wrote a person’s name, or the year they visited Maine, across the stern. “You want me to write Olympia?” Thomson said. “Or Snowe? Or just 2012?”

Olympia sighed. Recessions, foreign policy, a balanced budget—that was the easy stuff. “Maybe you could write OLYMPIA 2012?” she said.

As Thomson painted on the finishing touches, Olympia nodded to herself, somewhat privately. And I think that’s when I finally got it: the slogan on the stern belonged among the collection of campaign signs in the waiting room. But the bow of this boat was pointed away from Washington, toward a vague new horizon.