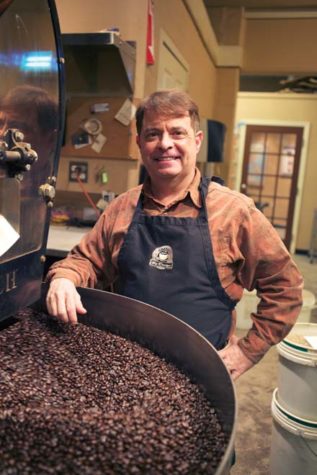 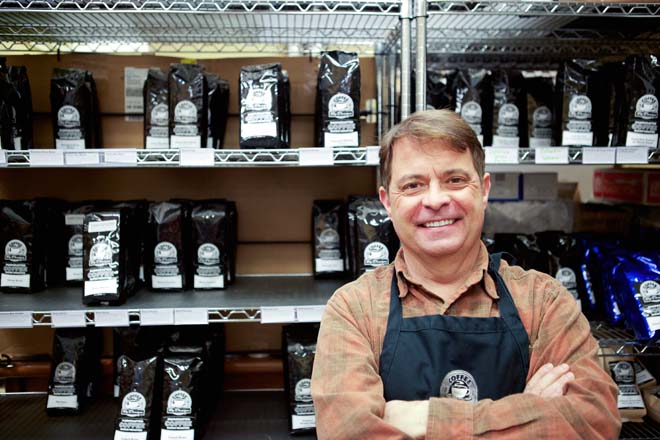 When Alan Spear and his wife Mary Allen Lindemann started Coffee By Design 18 years ago, they were front-runners in the third wave coffee movement we now find ourselves in the midst of. They were up against tough odds, but with passion they persevered.What’s your connection to Maine?

Where did the idea to open a coffee house come from?

I grew up in Cumberland, but I was working for an engineering firm in Seattle at the time. My wife Mary Allen worked for an advertising agency. Her charge was to find new businesses, so she’d come home and tell me about the coffee companies she was visiting. I thought it was amazing, how a bean can connect you to the world. I think that for us coffee had a story. We started the company when I was 32. I have always had this entrepreneurial instinct and I think I just decided it’s now or never. It was huge. I gave up this great job with great benefits and security and a regular paycheck and I did temp work. We were just willing to give it up. You sort of reach milestones in your life.

How did you find your way back east?

First we moved to Burlington, Vermont, but that didn’t feel right. After that we ended up moving to Providence, Rhode Island. We realized we had to make a business plan. And that was one of the best things that came out of Rhode Island. Meanwhile we were going through money, looking for locations. But we loved Maine. Every time we crossed the border we were like “this is an amazing place.” We decided that if we didn’t have a location [in Providence] by such and such date we would move. And we did. Within two weeks we found our first Coffee By Design location in Portland.

We were offered locations all over but we set up on Congress Street because the Old Port just wasn’t the right match for us. A friend led us to a building for rent. It had a purple drop ceiling and it was a crazy place but I said, “You know, there’s just something that feels right about this.” I hung out and thought, “This is a really cool neighborhood.” The coffeehouse is so much about community for us. We’re always creating these great relationships with farmers around the world, but we always come back to the fact that we are a Maine-owned company. It’s amazing—when a few of us on that 600 block of Congress Street launched the First Friday Art Walk we were told that we were crazy. Now look at it! When we opened our shop on India Street we were told the same thing. Eventually we learned that when people said we were crazy, it was probably the right move for us.

When did the business pick up?

Now we employ over 50 people. We manage over 500 wholesale accounts. But in the beginning I made zero for two years in a row. I lived off tips. And I didn’t care at that time. We didn’t have as much responsibility, but it was more just the passion for what we were doing. From the beginning we talked about how we wanted everyone to feel like they had a seat at the table. We believed, and still do, that everyone can appreciate great quality and everyone deserves great service. I don’t think the third wave coffee movement is always doing justice for the producers. They’re reaching out to a very small segment of the population that wants to pay four or five dollars for a cup. And it’s really cool that you can charge that and people will pay it, but we sell the same coffee for $1.60, $1.65 a cup. We don’t want anyone to come only once because it’s so expensive. We want people to come every day.