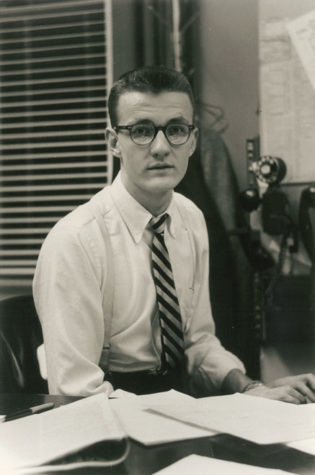 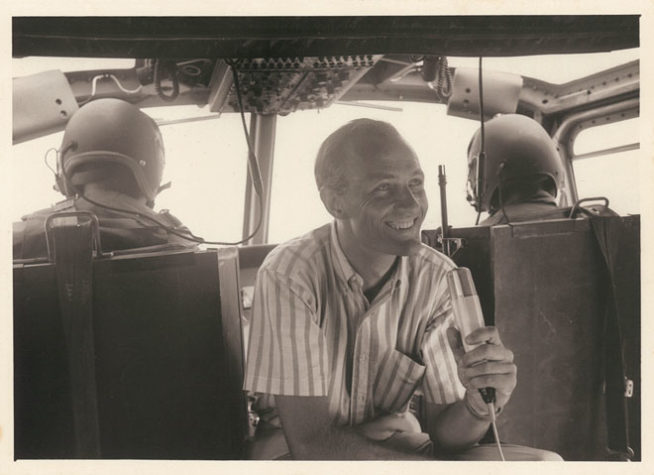 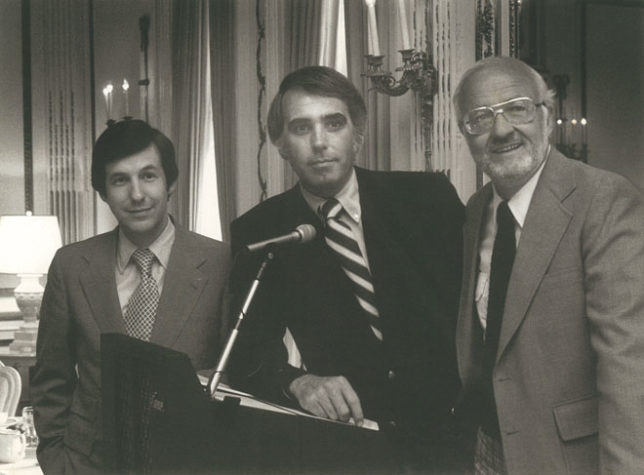 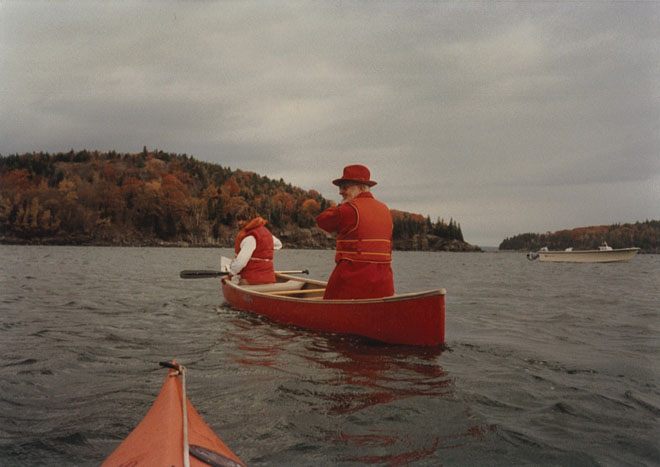 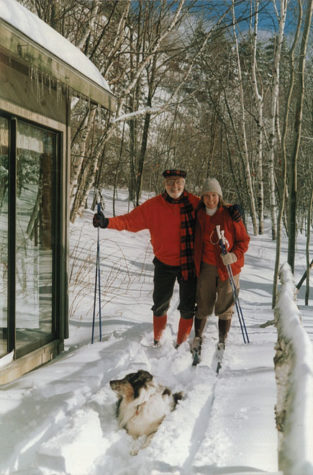 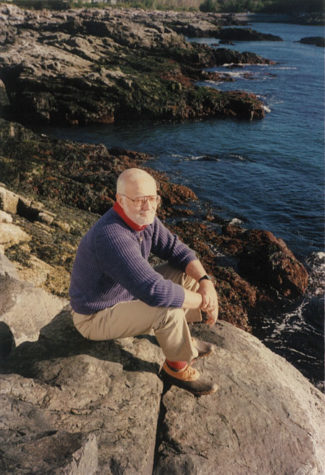 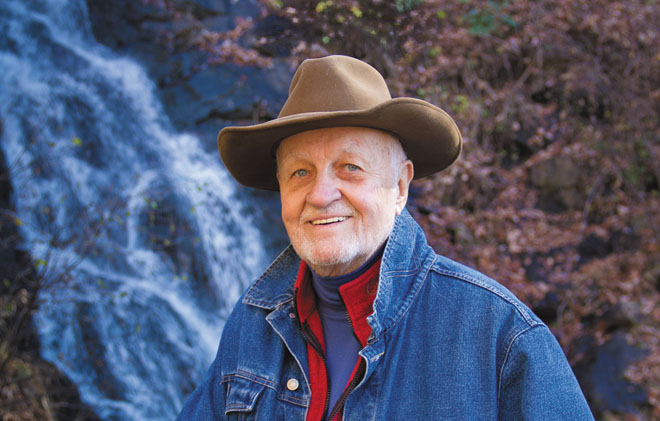 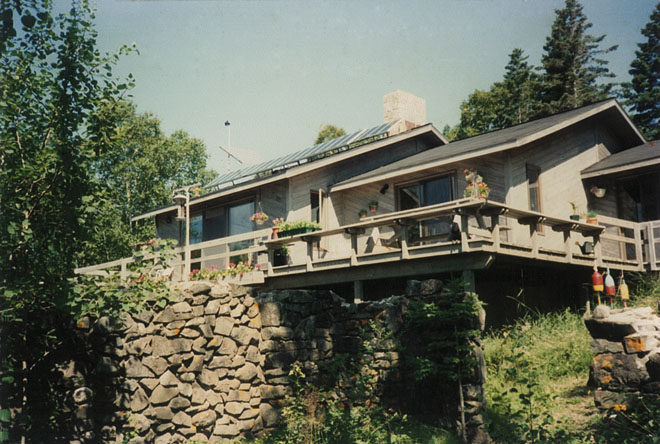 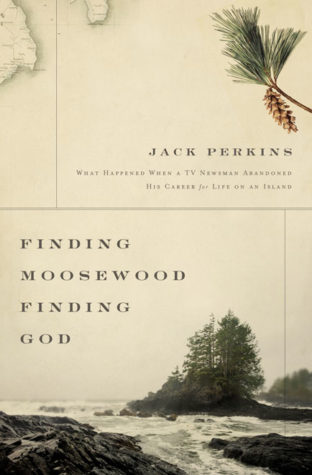 Jack and Mary Jo Perkins left Los Angeles for Bar Harbor at the height of his Emmy-winning career. There, they found a new home in the form of their cabin, affectionately called Moosewood. A former NBC journalist and host of A&E’s Biography, Perkins examines the spiritual transformation that marked their time on Bar Island in Finding Moosewood, Finding God. We spoke with him in the days prior to his return to Bar Island, where he was due to record a video promotion for his book.

I’d be remiss if I didn’t ask you about your career in journalism. Between the civil rights movement, the Cuban missile crisis, playing cards with the press secretary the night before the nuclear standoff: you’ve seen a lot. What was that like?
Something happens—I imagine to all reporters—that allows you to be calm and business-like and almost mechanical to go through the work that has to be done. It’s only afterward when you have the time and opportunity that you fall apart. But, something keeps the machine going while it has to. That was the feeling [during the Kennedy assassination], and as it was a few years later when Bobby Kennedy was assassinated. I was standing atop a mole unit outside Good Samaritan Hospital in Los Angeles for about 36 hours as they waited—the deathwatch—for Bobby Kennedy in the hospital. It was another one of those situations where there’s nothing more to say that hasn’t already been said. But you’ve got to keep saying it.

As a former NBC journalist and Los Angeles native, how did you find yourself on Bar Island?
We built [Moosewood] in 1984, I guess it was. And we just intended it as a vacation place but the time came that we realized, “Hey, we like ourselves better when we’re here.” Not just Maine and the island, but the way we were living and the way we were thinking. Though it was rather awkward timing—I’d just signed a new contract with NBC.

How did you feel about leaving Los Angeles and your friends behind?
All of our friends said, “Why are you leaving? You’ve got it so good here. It’s been such a good life and career here and all.” But I hate to think of getting to the point where I realize that that’s all I’ve done. I know I can do it. I’ve done it for 25 years and I’ve got nothing more to prove.

How did you find the lifestyle changes?
Geographically, it was as far removed from LA as we could get without crossing an international border or ocean. Psychologically, it was an even greater distance. Once we finally made the move—always a sucker for symbolism, I chose July 4 to leave LA—we drove across country and… It wasn’t like coming to a new place. It was like returning home. That was just the beginning of a transformation that we still in many ways didn’t understand.

You live in Florida now and I imagine it’s quite the change of pace from Bar Island. How do you find your solitude there?
Photography is still a good excuse to be out and about. We have a dog and we take him for walks on the beach. I much prefer woods though. Matter of fact, after we had been in Florida for a while, we had the opportunity to buy a piece of land up in North Georgia. So we built a little log cabin up there. And we did it partly because when we went and looked around the area, I was just so pleased to see Mary Jo walking in the woods again, which I hadn’t seen for so long, and is such a joy. She just loves it and she loves every plant and knows every bird and knows the sound it makes. So we took that little place up in North Georgia.

Do you still go up there?
We go up there maybe four times a year. Cause in Florida, you know, the highest peak that you have to climb is the Matterhorn at Disney World. Or the speed bumps outside the public grocery store.

Are you excited to return to Bar Island?
It’s going to be interesting. Mary Jo hasn’t been up there at all since we left. We left in 1999, and I’ve been to Bar Harbor but I’ve never gone back to the Island. And she’s never even gone back to Bar Harbor. She’s nervous. Every place we’ve been and every place we’ve lived, we’ve been just fine with. We never suffered or let ourselves suffer. Maine is definitely our favorite though.

When you moved to Maine, you found yourself thinking that it wasn’t chance. That you wanted to learn what that meant. How did you go about that?
I searched only after I had come to the realization. I started researching about people in history that had gone through the same kind of thing. We always talk about “finding God.” Which implies, and it’s accurate, that God is always there. But you’re not really aware of that until you have an opportunity to pull away from all of the other forces in your life. To pull away from all of the busyness of the profession, the busyness of the city, and the small bit of celebrity you’ve been able to acquire, and the acclaim you’ve received. Because—honestly, through all that went on in my career and all the acclaim that I was able to garner—I was pretty damn full of myself. And when you’re full of yourself, there’s no room for God.

Jack Perkins’ Finding Moosewood, Finding God is on sale March 5. You can preorder yours here.