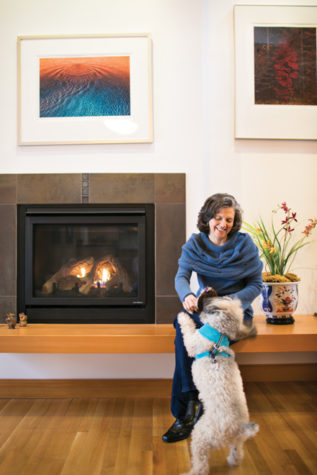 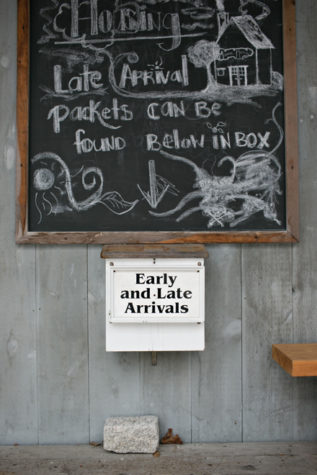 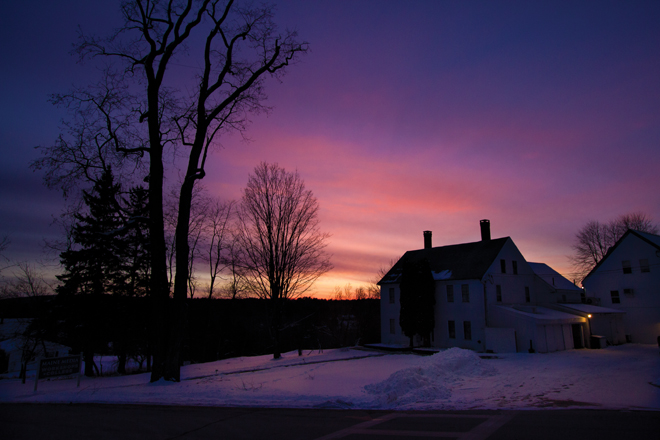 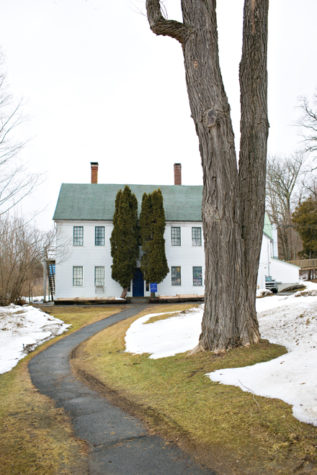 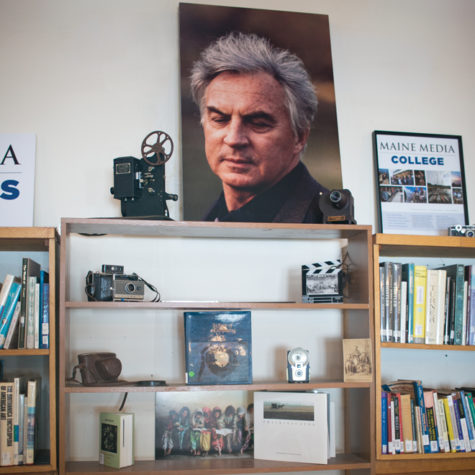 The school was founded in 1973 by David Lyman. Ernst Haas, pictured below, was another highly influential figure. 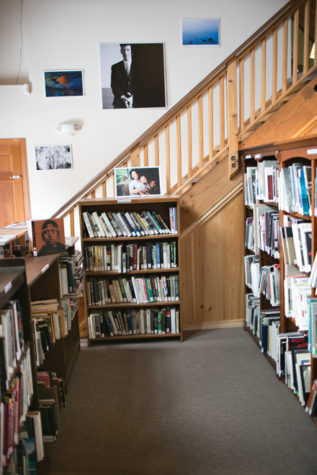 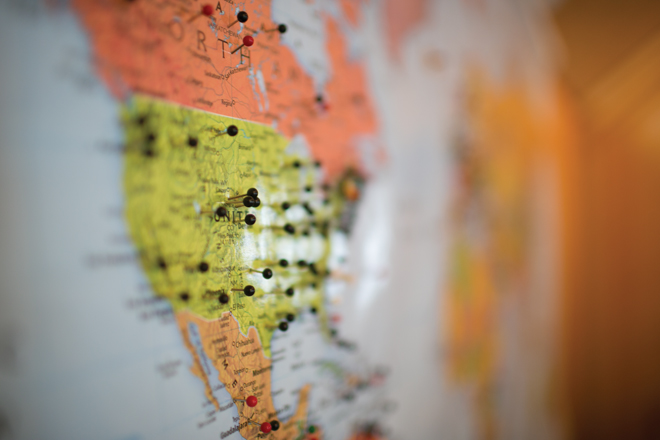 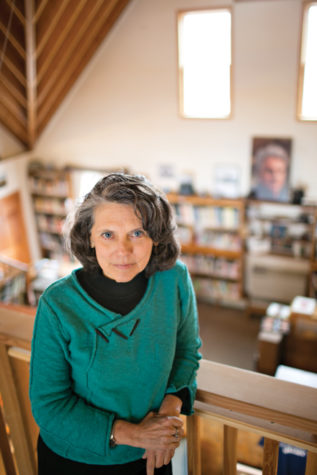 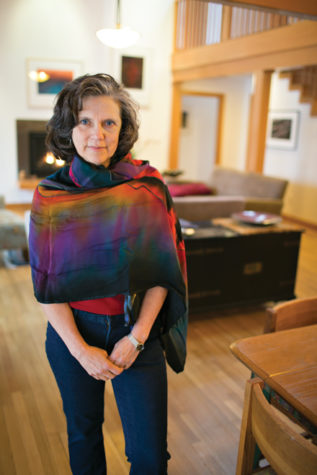 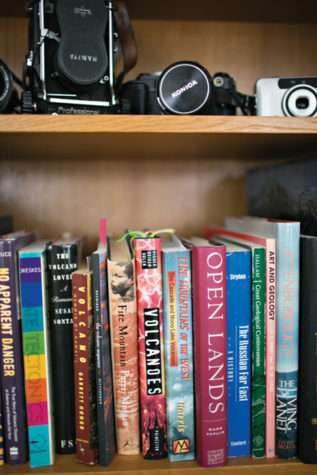 Westons bookshelf lined with volumes on volcanoes and her personal camera collection, all Konica brand cameras. Weston was president and COO of Konicas U.S. photo finishing operations from 1991 to 1997. 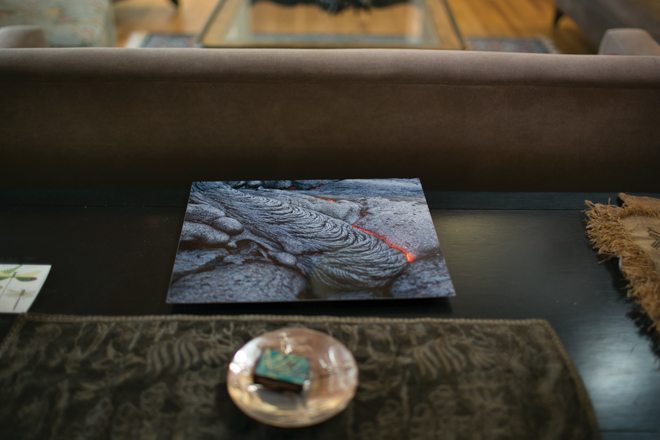 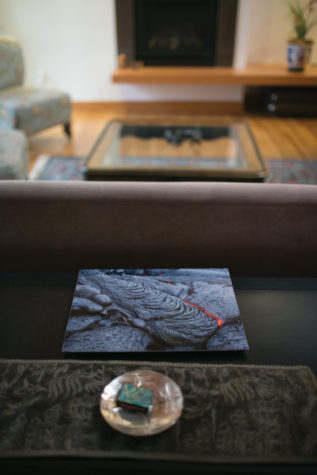 Portrait of the Artist as Volcano Tourist: Meg Weston Journeys to the Maine Media Workshops and College

Surtsey, Iceland. November 15, 1963. An island volcano erupts. The earth cracks open, lava churns, plumes of smoke multiply, rise, fill the sky. Nearly three thousand miles away, in Stamford, Connecticut, the weather is mild. A girl is blowing out the candles on a cake. It is her twelfth birthday.

In a matter of months, the volcano will settle down and a new island will be formed. The girl’s mother will show her daughter a copy of National Geographic featuring pictures of Surtsey, its gorgeous havoc, the dazzling sea surrounding it, and the child will not be able to look away. She will study those images from every angle. She will spend the next six decades dreaming about volcanoes, flying into volcanoes, photographing them. This is Meg Weston.

In February of 2012 she began her newest venture: president of Maine Media Workshops and College, the renowned institute of photography, filmmaking, and multimedia in Rockport.

Weston’s hobby of strapping herself into tiny airplanes in order to document volcanic eruptions from above, her need to get closer (and closer, and closer) to the action is a huge part of her dynamism. It’s part of what makes me like her so much: she is hard to pin down. She is fiercely intelligent, confident, and yet gives the impression of a person eager to learn and willing to be surprised. Her obsession with volcanoes throws all this into relief. What’s particularly fascinating is that Weston gives no impression of being an adrenaline junky. She is, quite simply, a woman who refused to relinquish childhood wonder. “Lots of kids have obsessions: volcanoes, or dinosaurs, or even music,” she says in a quiet voice. “But then you grow up and you don’t play an instrument, or you don’t think about dinosaurs anymore. But for me, that passion for volcanoes never left me. There were these photographs of tongues of lava coming down into the sea, and it just seemed so magical, this lava creating earth where there was none before.” Studying that National Geographic cemented something in Weston. She resolved to someday see a volcano erupt, and has done so more than 30 times.

Such passionWeston’s seizing of opportunity at a moment’s notice (after all, one cannot predict when a volcano will erupt)is the hallmark of her leadership style. How this style evolved, where she got and how she got there, is a story worth telling.

Weston left her Connecticut home in 1969 for Reed College in Portland, Oregon. But after a year she found herself struggling to concentrate. She dropped out and returned home, unsure of the direction of her life. The 70s were rough. She mentions a period of drug use and recovery. She mentions being unsure what to study, or where. She shows me a photograph of herself at the time, and I’m struck by two things: how beautiful she looks, and how sad.

“Then my father gave me his camera. I think he saw how lost I was. My father said ‘go take a course in photography.'” She signed up for a class in Connecticut with the photographer Craig Stevens.

Around that same time, Weston’s seemingly clairvoyant mothera Barnard College-educated scientist and pottershowed her daughter another magazine. This one was Scientific American, and in it was a story about Marshall McLuhan (“the medium is the message”) and the future of communication. Weston says, “I consumed itit fascinated me. I suddenly knew what I wanted to study.” Her mother, Weston says, always knew exactly what her daughter needed. So Weston went back to school, this time to Loyola College in Montreal, to study communicationsphotography, television, filmmaking. But midway through her studies, a tragedy occurred: Weston’s mother died unexpectedly, at the age of 48. Weston retuned home again.

Soon after she married her “best friend” (a marriage which lasted ten years) and they came to Maine on their honeymoon. They fell in love with the state and decided to move here, and Weston finished her degree at the University of Southern Maine. Her former photography teacher, Craig Stevens, told her about the Maine Media Workshops, where he was the assistant director (and still teaches in the summer season). In 1977, she took a trip to the Rockport campus for a two-week workshopnever imagining that she’d become president of the place 36 years later.

That workshop taught her to push her boundaries. She loved photography but had been playing it safe. “Someone said, ‘There are no people in your pictures.’ So I decided to hitchhike from Rockport to Rockland to take pictures of people. For me, that was pushing my boundaries.” She shows me the photographs she took during that expeditiona collection of gritty people, poverty-stricken, bathed in sunlight, who look less like midcoast Mainers than dust-bowl refugees. Weston captured something luminous in them. It seems remarkable she was able to locate such pathos in her first human subjects. These haunting images say so much about Weston’s vision, her sensitivity, her willingness to look hard.

But that brief workshop ended, and soon Weston entered the working world. Her career took off. She credits her boss and mentor at Bicknell Photo Service, Ned Harding, for helping her see the possibilities of business: “He was passionate about photography but also he was passionate about business. He taught me how creative business could be. Coming out of the 60s, I thought ‘businesspeople are bad, business is evil.’ He really taught me what a joy it is to create jobs, and to give people the opportunity to work, how meaningful work could be. And how creative growing a business could be. This was huge for me.”

Bicknell was later sold to Konica, a Japanese company with 117 worldwide subsidiaries. Weston became the first woman president of any subsidiary. She grew the business from nearly $30 million to over $150 million in revenue. “My philosophy of work,” Weston explains, “is to seize opportunity where you find it and be open to opportunities. Prepare yourself, but leave yourself open. And I believe we collectively have more knowledge than anyone does individually.”

Weston is not afraid of disruptionsshe thrives, in fact, in the space where new technologies, new traditions, meet old ones. This is how she found her way into the newspaper world in the late 1990s. Jim Shaffer, CEO of Guy Gannett Communications, knew the newspaper industry was changing radicallythat the days of the paper medium were fading fast. While Weston had no news background, her gift was one of managing organizational change, and of finding opportunity in what she calls “times of disruptive technologies.”

As each session opens, Weston gives a Sunday night welcome at the Maine Media Workshops and College. “I talk about my experience when I came here in ’77, and the things that are true today that were true then: how off the beaten path this place is, how it’s an opportunity to immerse yourself, how it’s all about communityhow you learn as much from other people around you as you do from faculty, and how important it is to push yourself beyond your comfort zone, to really learn something new. All this was key then, and it’s key now.”

These days, available technologies and methods of distribution are markedly different than they were in the 70s, and faculty and staff must work diligently to explore and capitalize on the convergence of technologies. Weston and her team are planning a “re-launch” of the institution in the summer of 2013 to commemorate its fortieth anniversaryto celebrate their history and articulate their vision for the future. They realize that in the era of dizzyingly evolving and innumerable technologies, the core mission of the institute must be clear. Whether one is using a pinhole camera, digital SLR, or high-end filmmaking technologies, the goal, they believe, is to tell a story. This is how Weston sees it:

In today’s media world, content proliferates on the web, on cable TV, on tablets and in self-publications such as e-books. This ‘multi-media’ or ‘trans-media’ content takes the form of still images, videos, audio, text, and may yet morph into other formats we haven’t even imagined. Because our internationally recognized faculty allows us to teach a diversity of skills in photography, filmmaking, video, web design, and book arts, we are uniquely positioned to take advantage of this convergence of media, and help people around the world learn the art and the craft of visual storytelling. If we think of ourselves as teaching ‘visual storytelling,’ then we can begin to organize our offerings in terms of what kind of story you want to tell, and then what are the tools you need to learn to be able to tell it.

The Maine Media Workshops and College is doing enthralling work, launching new degree programs, bringing fresh and familiar voices together. Its website is a portal into a world of storytelling possibilities, and you should go there, now, and see precisely what Weston and the staff have been dreaming up. But I can tell you something here that the MMW website cannot tell you: Meg Weston is the right person to be leading this charge. Her vision, her unique story, is a powerful and unexpected and instructive onefor artists and businesspeople alike. She has found a way, even in the cutthroat business world, to maintain a vital sense of imagination.

The composer Glenn Gould said, “The purpose of art is not the release of a momentary ejection of adrenaline but rather the gradual, lifelong construction of a state of wonder and serenity.” When Weston talks about volcanoes, that is precisely what you hearwonder and serenity. When you visit her website (volcanoes.com) it’s what you see. And when she at last publishes her book-in-progress, part popular science, part memoir (working title, The Volcano Tourist), you’ll enter more deeply Weston’s state of wonder.

In Hawaii, in 1983, Weston was ready to witness her first active volcano. When she heard Kilauea was erupting, she flew 6,000 miles. But when she got there, she was told: Nope, it’s all over. She went to her hotel room, heartbroken, and prepared for bed. Later that night, a phone call. Something is happening again, she was told. Get here now. She raced outside. She hailed a cab to the airport. She made it.

“We’re in a little plane, and when you get close, it clouds up. And you can smell sulfur. I remember thinking: You know, if I die I’ll have died doing what I love to do, so it’s ok. We can’t see anything. And thenthen we broke through the clouds. I saw what’s called a ‘curtain of fire’ along a rift zone, a series of two or three hundred fountains along a ridge a mile long. And there’s lava flowing up, flowing up, then out, then back into the crack of the earth.” Meg Weston pulled out her camera.