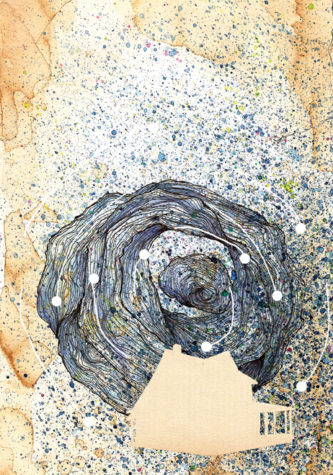 Several of the several score we
saw in a cold quarter hour so
bright they lit the clapboards
of the house like lightning, each
a call upon us for amazed,
confirming cries, passed among
us—there, yes, that one, yes.
After a time standing with my
gaze pitched up in darkness,
I grew unsteady; no patriarchal
oak, leaf-shorn, avidly fingering
the certain stars, catching the fallen.
I had to lean against the house
to watch the last few minutes
worth of wild spears flung down
past the roof, or through that elm
whose reach astonished me now
just eight years past its planting.
And remembered years ago trying
to write with indulgently amused
disdain of observing the fore-
known miracle of an eclipse.
But this morning with so much
of what’s left of this life uncertain
or decayed, recalling how dawn
exhaustion like this once seemed
luxurious—coffee, loved ones,
half light—I am glad we knew
to rise, glad for the vault of old stars
through which those blazing tails
came lashing, glad now even
that we will all be gone when next
the planet meets such brilliant rain.

“Meteor St.” is from Robert Farnsworth’s third collection of poetry, Rumored Islands. For twenty years, he has taught writing and literature at Bates College in Lewiston, where he lives with his wife and two sons. “My poems most often arise from some unexpected interpenetration of private, interior awareness and the outer world (often figured as a landscape or place) it must move in and respond to. Intrusions, collusions, profusions, occlusions that occur to me in musical, vivid language—I try to follow these and shape them into poems.”