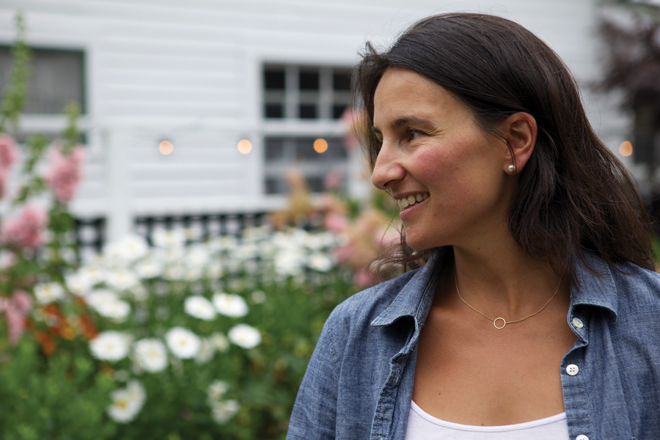 Amanda Hallowell is the head cook (her preferred nomenclature) at North Haven’s Nebo Lodge, an inn and restaurant that has received national attention of late.

What was is like to grow up on North Haven and to live there now?
It has all the complexities of a small-town home. You know everybody and everybody knows you—too well some days and perfectly on other days. North Haven is a place that I’m really proud of. I think it’s incredibly beautiful and this is also a very strong, interesting community that is becoming more and more diverse. Young people are moving here, bringing great new things to the community and celebrating old values that the community has held forever.

How did you find your way into cooking?

I’ve always had an interest in restaurants, probably because of my parents. My dad and my stepmom opened a place on North Haven called the Pulpit Harbor Inn and Restaurant in the mid-80s. It was sort of what Nebo is now but 30 years ago. The kind of food that Nebo makes in many ways is the kind of food my mother has always cooked, which is very fresh, seasonal, and sort of French-influenced. At one point in my New York writing days, I decided I was ready for change and wanted to come back to Maine. I worked for Stacey Glassman of Swan’s Way Catering in Lincolnville. She gave me a chance to run her kitchen, and I was able to learn so much while cooking for her for two years.

What brought you to Nebo Lodge?

Chellie Pingree bought Nebo. She is very much this wonderful, casual, visionary person, who was like, “Yeah, if you want to open a restaurant here, why not? Anybody can do anything if they’re willing.” She let me and my then-husband start the restaurant in the summer or spring of 2007. We thought we’d serve 30, 40, 50 people a night—country-inn fare, nothing special—but we entered the scene at a time when seasonal dining was exploding. On North Haven it kind of has to be that way—it’s hard to get supplies out here. There are some amazing things being raised on the island, like our local oysters, and now there are even more farms than there were then.

What do you love about cooking?

I am a creative person but I hadn’t found my creative outlet until I started cooking. I love the exploration, the discovery of new things. I am a person who can get bored easily so I love always being able to try something new and share it with people. I worked at big corporations where there was a lot of structure and restrictions, and I didn’t really feel like my work was really my work by the end of the day. A lot of people contribute to how great Nebo’s become. It feels very sincere.

What is it like raising your daughter on the island in such a seasonal line of work?

Right at the time my then-husband and I said, “Alright, let’s do it,” I got pregnant. I was like, what are we going to do? I don’t even know how to do either of these things, let alone both of them. I’ve been raising my now five-and-a-half-year-old kind of out the back door of the kitchen with family and whoever can help. I’m in a unique position. Talk about sustainability. Running a restaurant is really hard, exhausting work. We’re only open May through October so as burned out as I get, I always look forward to this great break in the winter. I do light management work for the business, take care of my daughter and try to be a good mom. And now I also spend part of the winter in New York, which I love. There’s such an incredible food culture down there. It really keeps me fresh.

What are some of your favorite dishes you make at Nebo?

We love them all. We’re known for things like kale chips. Roasted, crispy, kale. I guess what I love about that dish is that we started serving it simply because we grew a lot of kale. We make great fried green tomatoes and I must say that when we started doing them seven years ago nobody in Maine had fried green tomatoes. Our menu is truly  driven by the food that comes across our back porch, so to speak. If Turner Farm isn’t growing something, we just don’t offer it.