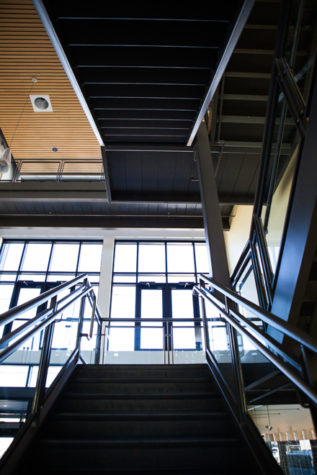 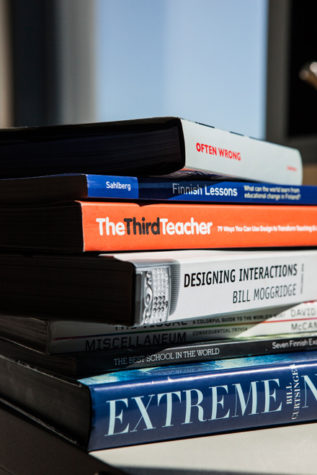 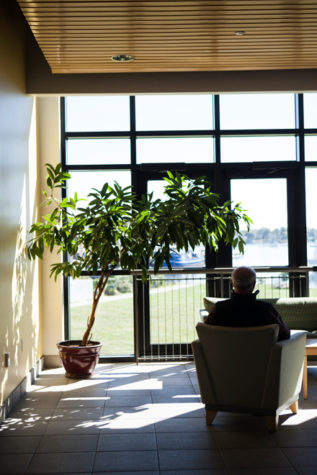 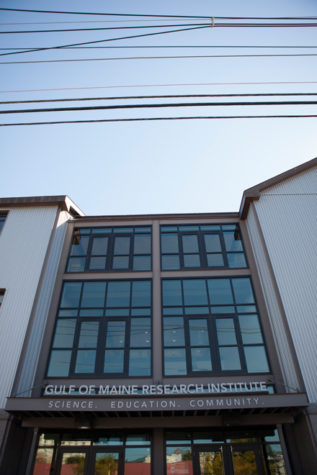 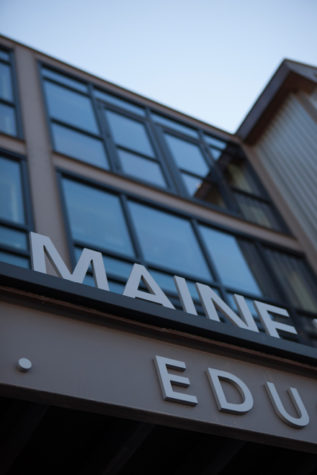 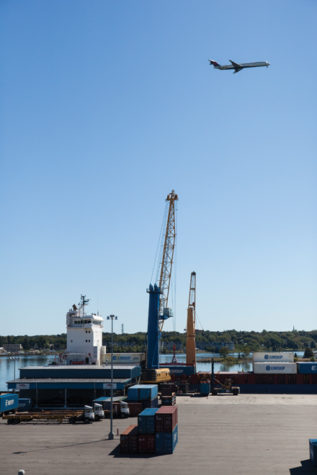 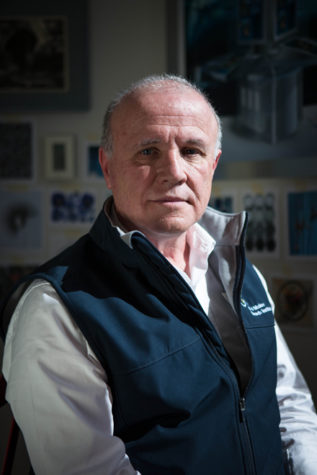 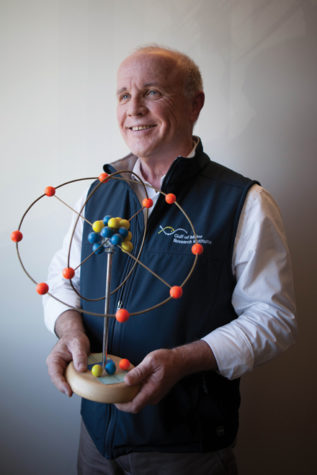 GMRI sits on five acres of downtown Portland waterfront with a view of the working harbor out back. 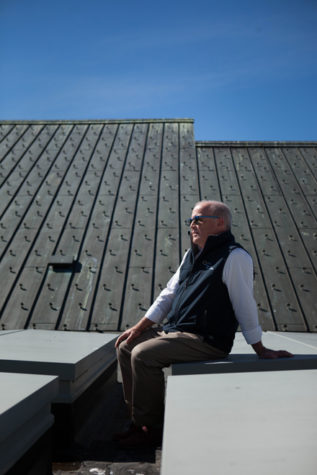 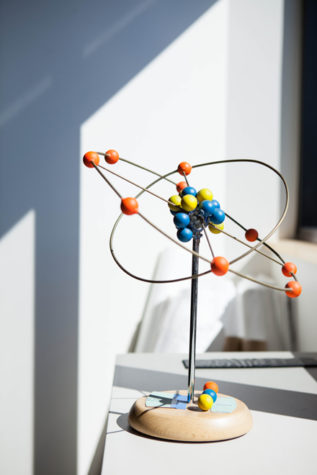 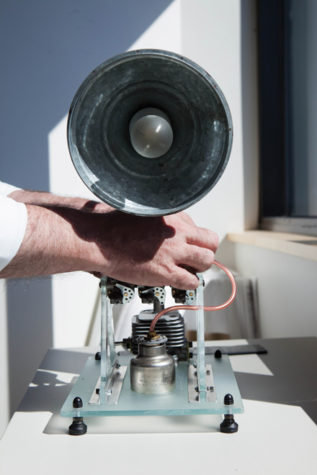 Alan Lishness from the Gulf of Maine Research Institute: “You can get things done in this state. It’s our great advantage.”

It’s one of those wooly Maine days when Portland Harbor sits in a bank of distortion-field fog, and nothing is what it appears, the kind of day you could pass by the Gulf of Maine Research Institute (GMRI) on Commercial Street and mistake the behemoth for an enormous, flat-nosed fishing trawler with a hull made of gray steel.

And if you’re like me, you’ve probably gotten the feeling there’s something interesting going on inside this mother ship.

Science is what’s going on. Serious Gulf of Maine watershed science. The three GMRI credos—Science, Education, and Community—are carved in big block print above the glass doors to prove it. Inside, the place hums with the casual intensity of so many scientists working on the complex issues surrounding ocean stewardship. The floor plan is open and airy, with dozens and dozens of offices all oriented to the working harbor out back. The mission of GRMI is to help the Gulf of Maine realize its full potential as a healthy ecosystem by offering “real science solutions.”

But who drives the innovation engine of this ship? Meet Alan Lishness, GMRI’s chief innovation officer, a formal title for a modest, quick-to-smile man. Lishness has the remnants of a head of grey hair, laughing eyes, and a gravelly voice. He says that GMRI is passionate about the importance of community to “help resolve our marine resource issues in the Gulf of Maine.”

In fact the GMRI building itself was conceived as a place to engender real dialogue among the various players in the Gulf of Maine: scientists, fishermen, legislators, and educators regularly gather here to discuss the delicate issues surrounding sustainable fisheries. Lishness explains, “we look at the entire supply chain that starts with fishermen, then the processors, then the consumers.” Remaining objective is crucial to GMRI during these heated discussions, and Lishness says he knows they’re doing a good job of it “when everyone in the room is mad at us.”

Lishness has a personal passion at GMRI “to make Maine a science-literate place,” which means, “educating Maine’s school children about the practical applications of science in their own worlds.” In 2005 GMRI opened a hybrid research and education lab which includes a Fishery Ecosystem Research Wing, complete with wet labs and analytical labs, and The Sam L. Cohen Center for Interactive Learning, with live and digital exhibits that create hands-on learning opportunities for Maine middle school students and teachers.

Lishness says, “to understand science, kids need the kind of science inquiry where they’re at the center of the learning.” GMRI brings real science to kids in all of Maine’s 16 counties: the easy-to-reach counties and the hard-to-get-to ones, the prosperous ones and the counties that struggle. This goal of education equity (and they’re very serious about goals at GRMI) is to engage 90 percent of all Maine sixth- and seventh-graders in all 16 counties in GMRI science programs. It’s a pretty formidable task. This year they tracked at 75 percent, which they’re pleased with, given the tightening of so many civic financial belts.

Lishness is extremely affable, with a quick mind that’s often three steps ahead. His second-floor office looks like the playroom of a science-crazed middle-school boy. It’s decorated with gizmos the likes of which I’ve never seen before: a newfangled lamp that Lishness fabricated from a Macintosh G5 water-cooled dual processor, and another one from an early twentieth-century switching relay that controlled the gates at a railroad crossing. There’s also something he’s calling the Neon Atom Model sculpted out of red, blue, and yellow bright plastic balls.

The image of a racecar comes to mind while I listen to him talk, and it turns out this isn’t such a far-off analogy, because Lishness tells me he’s actually a big racecar guy and has even co-owned several cars. Photos of them wallpaper his office: shiny, bright-colored racecars. Born and raised in Brunswick, Lishness headed south to Gettysburg College with a love of photography, debating, and teaching kids. At Gettysburg, the poet William Blake became a full-bore obsession. There were no science classes for Lishness in college, if you’re wondering, because no one ever figured out how to engage him in science.

By 1972, he was a card-carrying hippie with a ponytail down his back and a penchant for protesting the Vietnam War. When he returned to Maine after graduation, it was with “remarkably little foresight.” He did a stint as an aerial photographer, then spent years designing and building windmills. He followed that up as energy director for the Maine Audubon Society, where he built the first passive solar energy collector in the state of Maine.

GMRI was privately founded in 1968 as the Research Institute of the Gulf of Maine (RIGOM). In 1988, Don Perkins, the president of GMRI, invited Lishness to join “the tiny staff” as project director for a state-of-the-art aquarium. The price tag grew too high, but not before, Lishness says, “we got tantalizingly close. It’s really hard to build an aquarium.”

After the aquarium dry run, RIGOM said, “Let’s build something that supports Maine people instead of a tourist destination. Winters are long here.” They wanted a rigorous, science-based research center focussed on the diverse ecosystems of the entire Gulf of Maine watershed. And so was born the GMRI. Perkins and Lishness then began writing grants around the clock and reaching out to various donors who cared about the Maine watershed as much as they did. Their fundraising efforts have been impressive. All you need to do is poke your head in the gleaming state-of-the-art lab, which Lishness says “poses questions to kids that adults don’t know the answers to, a place that looks hard at ecosystems all over Maine.”

Lishness gets very passionate about ecosystems, and when this happens he smiles even more than he normally does and enunciates his words. Surprisingly, the lab at GMRI was the first of its kind to put the focus on ecosystems and to allow kids to “transform themselves from passive learners to real-life investigators.” Take the GMRI PowerHouse program, for example. This is a partnership between GMRI and Central Maine Power that allows school children (my ten-year-old included) to track how much coal or natural gas or renewable energy their own washing machines and refrigerators burn at any given hour of any day. It’s an amazing example of how GMRI is getting kids to muck around in hard science and to care about it.

A child links his home CMP meter up to the PowerHouse program and then this child (my child) figures out how much energy it’s taken to wash his own soccer uniform. He learns (with great excitement) that if he washes it in the morning, it will be with much “cleaner” hydro and solar and natural gas energy. If he washes it later in the day, his uniform is “dirtier” from the coal and oil it took to wash it during peak energy use hours.

Lishness says, “It’s really hard for kids to grasp that the ice floe is melting and the polar bears don’t have anywhere to stand. But PowerHouse gives kids knowledge to understand how ‘clean’ their laundry is, and that there’s a dollar price and a carbon-footprint price in their own home. If your child knows more about how electricity works in your house than you do, then your child is really empowered to make some informed decisions around usage.”

He has two children of his own: Emma, who lives back in Maine now and is the only person Lishness knows “who needed pages added to her passport because she traveled so much;” and Tom, who just graduated from college with a joint degree in English and physics. His wife, Debbie Peck, recently went into “semi-retirement” after working in the Westbrook school district for 32 years, most recently as director of special education.

I ask Lishness how bullish he is on education in Maine these days. “Very. Because we are so small,” he says. Then he likens Maine to a petri dish: “you can get things done in this state. It’s our great advantage.” Another reason he’s optimistic about Maine education is because “everyone is an expert on education. Everyone had one. And everyone is thinking about it.”

As far as charter schools go, Lishness is “hard pressed to say that we need to pick a winner. It’s a complex system. It’s not strictly linear where if you do this then all kinds of other things will happen.”

He makes it clear he doesn’t know the future of charters: “At GMRI we are just generally interested that people who care about education are trying something out. Some charters work really well. Some don’t at all. Some work just like the public schools. But what if we learn that the specialized learning approach is twice as effective? You’d never be able to make a bet and deploy it to every student in Maine at once. So we are interested in watching.”

There’s a book of photography that sits on the table between us in Lishness’s office. I thumb through it while I listen to him talk. Inside the book there’s a photo of the racecar Lishness was able to once park inside the Portland Museum of Art. There’s also one of Lishness with that ponytail from the 1970s. The book is a gift for his family that he put together himself when he turned 60. He laughs when he tells me the name of the book: Often Wrong, Never in Doubt.

Lishness says in his next life he wants to be a social scientist, “because life is complicated. It doesn’t tend to be just about one thing. It’s usually about ecosystems. And people are a really important factor in what happens in the ecosystem.”