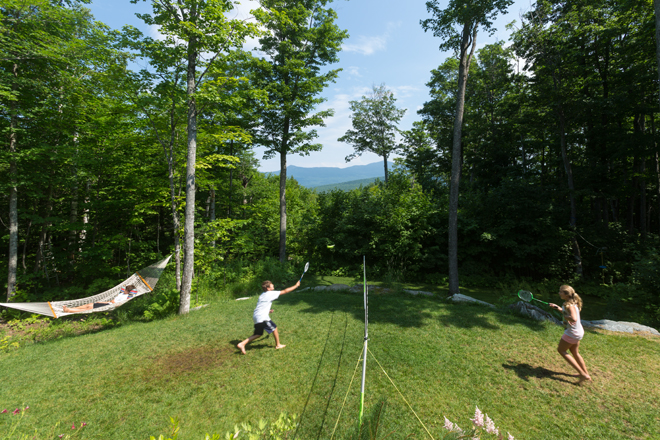 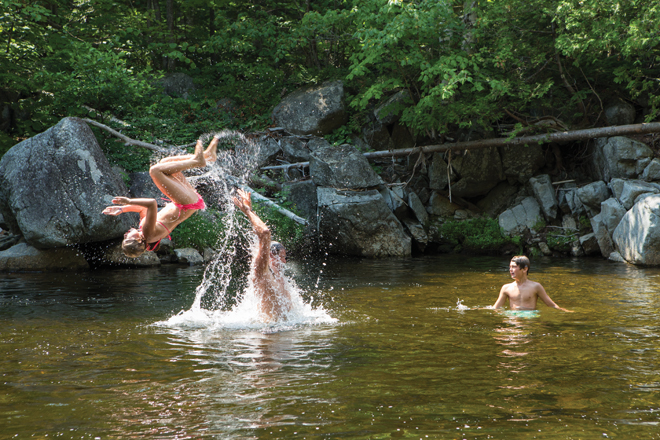 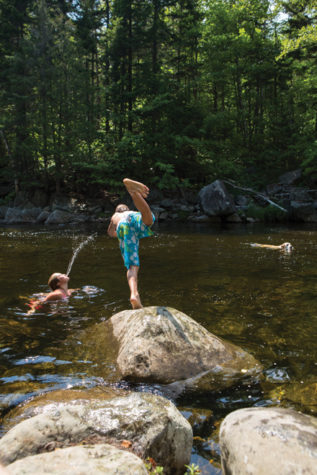 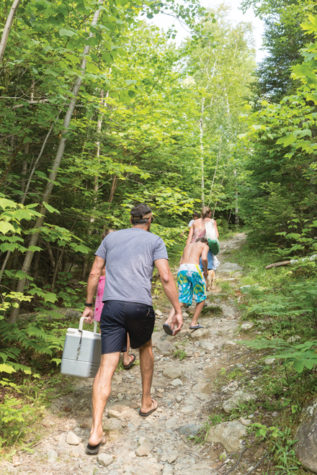 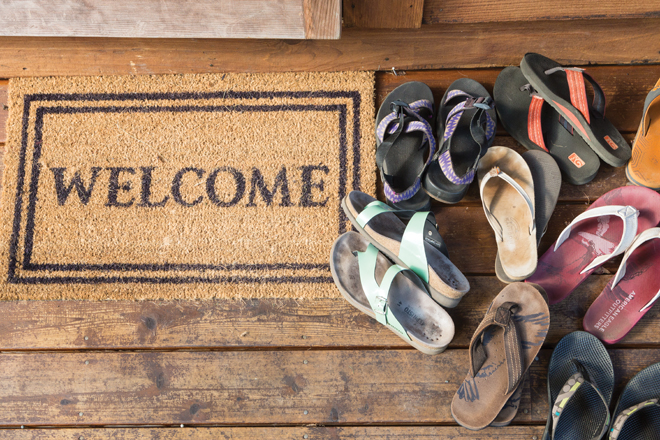 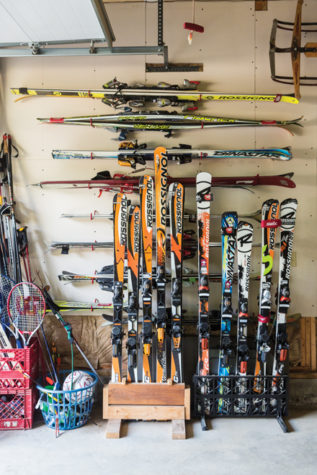 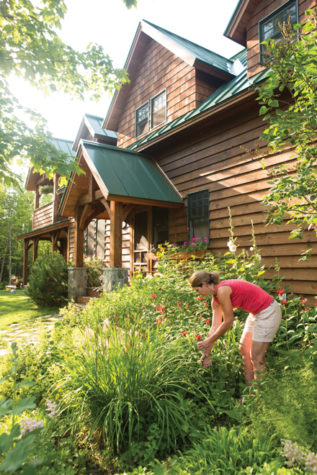 They Took to the Mountain

In late summer, I’m headed to Sugarloaf to explore what life is like for a family who lives year-round on the mountain. When Everett Kircher—father of Boyne Resorts’ eastern operations president Stephen M. Kircher—first opened a golf course at Boyne Mountain in the early 1950s  to keep his winter ski staff employed over the summer, the notion of a four-season resort was born. Today, a community of condominiums fitted out for both winter and summer occupancy surrounds most mountain resorts, and it’s not uncommon to see signs along the access roads warning of Nordic skiers, snowmobiles, and golfers crossing. In addition to “Watch Out For Baby Moose!” there are several such signs on the climb up West Mountain Road to Village on the Green, an association of houses built next to Sugarloaf’s championship golf course. The post-and-beam home of the Kearing family is at the top, privately situated at the end of a cul-de-sac with a killer view of Cranberry Peak in the Bigelows across the valley.

“The skiing is what brought us here,” Dave Kearing says, sitting comfortably in the great room addition to their house next to a huge stone fireplace on a hazy August morning when the late flowers of summer are dusty with pollen, heavily yellow and orange, harbingers of the fall to come. Barefoot on the patterned carpet over glowing wood floors, he begins gathering gear for an overnight camping trip with his younger son, Luke while we talk. A native of Binghamton, New York, Dave grew up both Nordic and Alpine skiing on the small local mountain, Innsbruck, as well as the bigger Whiteface in Lake Placid. After an undergraduate degree in economics at Cornell, he was accepted at law school. But because he wasn’t ready to jump back into academics, Kearing headed west to the mountains of Wyoming, ending up in Jackson Hole, big-time ski territory. Meanwhile, his wife Kim—not yet known to him—had also headed west after completing a degree in English at William Smith College. “I was looking for an adventure before having to get serious in the ‘real world,’” she says today. They met and married, a match made near heaven—at the top of the Teton Range, where some mountains are over 14,000 feet. By then, Dave had decided to forego law in favor of medicine. They moved back east, to Valhalla, New York, where they lived for four years while he attended New York Medical College. After medical school, the couple returned to Wyoming, this time to Casper, real cowboy country, where they lived for three years.

“My family lives in New England,” Kim Kearing says. “I grew up in Massachusetts but now my parents live in New Hampshire. After Henry was born in 1998 in Wyoming, we realized we wanted to be back on the East Coast.” Dave nods in agreement. “I started looking for jobs close to ski areas.” When Franklin Memorial Hospital in Farmington offered him a position in the Emergency Department in 2000, they knew they were coming home. That same year, they bought the land on Niblick Way, and moved into the house they helped design in the fall of 2001.  Emma, 13, and Luke, 11, were both born in Farmington—real Mainers, as Emma is quick to point out.

While it’s true the family can put on its ski boots at home and be on the mountain in a matter of minutes, that’s not all life is about for them.“Yes,” Dave says again, “skiing is what brought us here, but once we arrived, we found a real community.” And a way of life. “Right now,” both Kim and Dave emphasize, “is the best time of year. In the winter, it’s maybe not a zoo, but very crowded. A lot going on. Summer is our time. We bike, swim, fish, and play golf, just hang out.” They keep a boat in Oquossoc on Rangeley Lake, less than an hour away. Rangeley is where Louise Dickinson Rich’s famous We Took to the Woods is set. That family was trying to get away, not at all what’s happening with the Kearings.

Nor do the Kearings fit the four-season resort model. This isn’t a family that migrates between summer and winter opportunities. This is a family that is organically connected to place; that is, an engaged family with roots. The house is full of the life lived by all its inhabitants. The garage is stuffed with skis, golf clubs, boat paddles, mountain and dirt bikes, gardening tools, all the paraphernalia of the life of a busy, athletic family. The house is surrounded by gardens, perennials, vegetables, even an enormous climbing hops vine. And the Kearing brothers have a family business, mowing lawns in Village on the Green. This family doesn’t go to Sugarloaf. This family lives at Sugarloaf.

The Kearing children go to the Stratton Elementary School in MSAD 58, only 15 minutes away. (They catch the bus at that old Sugarloaf landmark the Rack, just down the hill from home.) A K-8 facility with 101 students, the student-teacher ratio at the Stratton school is 10:1, lower than the Maine average of 12:1. If the Kearing children are any indication, there’s a terrific education available at Stratton.

The Kearings’ education model is, in fact, exemplary. The availability and proximity of the Carrabassett Valley Academy affords many opportunities. Begun as an offshoot of the Sugarloaf Regional Ski Education Foundation (SRSEF) in 1969, to help racers and freestylers sharpen their skills for competitive skiing, the academy opened its doors in the winter of 1982-83 as an independent five-month, winter-term tutorial program. Today, CVA is a private accredited college preparatory school serving grades 8-12 in addition to being a ski academy. Eighty-one students attend the school, 69 percent of them boarders. The academy had the foresight to maintain a flexible attendance schedule, allowing students a choice of four enrollment periods: Full Year, Fall/Winter, Winter/Spring, and Winter Term. This makes Henry Kearing very happy because he is able to matriculate at Mount Abram Regional High School in Salem for the fall semester so he can play soccer; attend CVA for the Winter Term to ski; and return to Mount Abram in the spring for baseball. Pretty good. Because the schools cooperate, students like Henry are able to move back and forth without suffering academic gaps or lapses. Emma and Luke both say now they want to do the full year at CVA, but, as their parents point out, time will tell. Still, the options are terrific, and all only a few miles from home.

Kim remembers people wondering what in the world she would do with herself in such a rural, isolated place.“Maybe they haven’t been to Wyoming!” she laughs. While there is a definite rustic quality to Carrabassett Valley, it certainly doesn’t feel isolated. (However, they don’t have public radio. Dave says every time MPBN has its fundraising campaign, he calls up and tells them, “Just put a tower on the mountain and everyone up here will contribute!” He knows the exact spot on Route 27 where he’s close enough to Farmington to pick up Morning Edition.) “I’ve never been busier,” Kim says.  She has been the middle-school coach for both the boys’ basketball and soccer teams at Stratton as well as the regional Little League—which has been undefeated for two seasons. When asked if she had any credentials for coaching, she replies, “Yes, I was a competitive athlete in high school and college, but I was also a grant writer.” “And that came in pretty handy,” Dave adds. “The local library wanted to raise funds. They were having bake sales, the usual. Kim came in and said this is what we’re going to do: have a ladies’ luncheon up at Bullwinkle’s on the mountain. Big bucks per plate. She knows how to think outside the box,” he says proudly. That fundraiser luncheon kicked off a $1.5 million campaign. Within a couple of years, the library had reached its goal.

In addition to being one of five emergency department physicians at Franklin Memorial Hospital, Dave has been an active weekend alpine skiing coach at Sugarloaf in the junior divisions. Each of the Kearing children—who learned to ski between the ages of two to three and could go anywhere on the mountain by the age of four—has been coached by a parent on multiple occasions, which they acknowledge today without too much eye-rolling.

Outside, late summer sun is bathing the valley. A breeze rustles the leaves around the deck. “I’ve never second-guessed this decision,” Kim says, leaning on the railing, looking out to the distant mountains. “This is where we belong.”