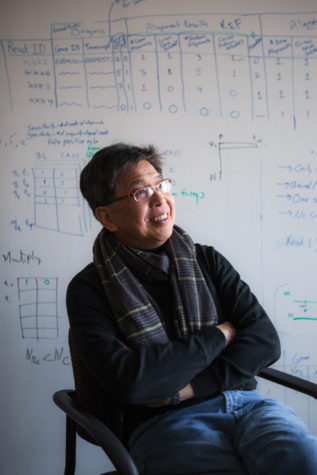 Edison Liu, M.D. is the a medical doctor and president and CEO of Jackson Laboratory. 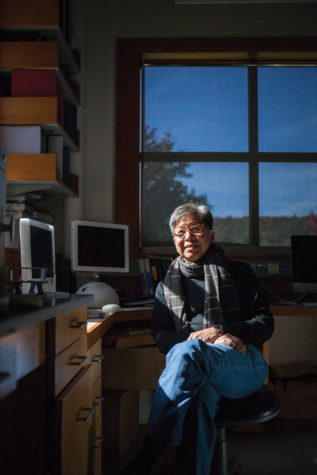 Lab equipment stands ready in one of the new, modern lab rooms.

Edison Liu, M.D. is the a medical doctor and president and CEO of Jackson Laboratory. Photographed in one of the labs. 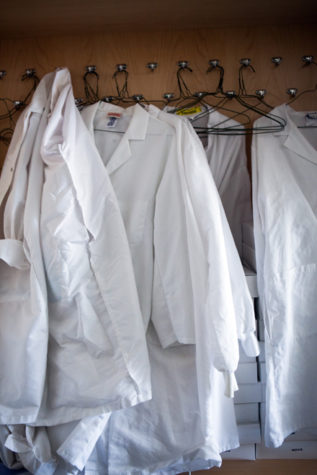 Lab coats at the entrance of one of Jackson Lab's laboratories. 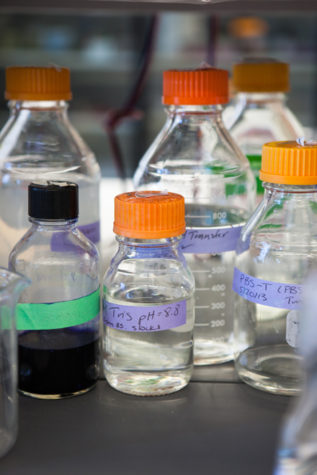 Chemicals and fluids at one of the labs. 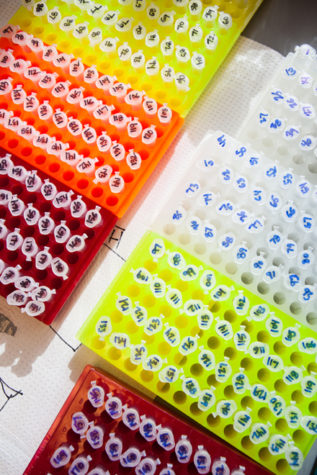 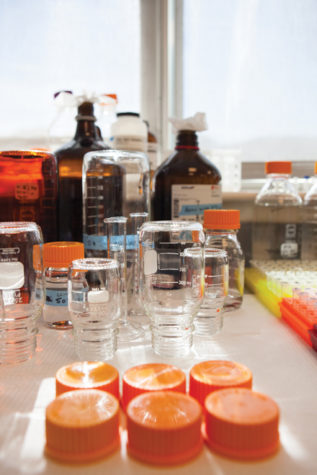 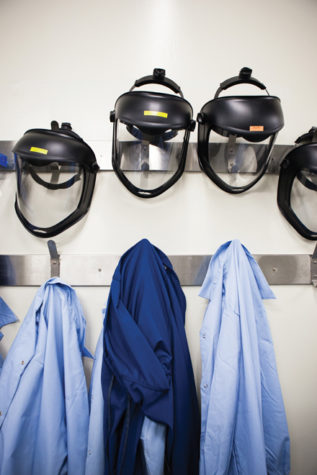 Equipment used for protection in the cryogenic freezing lab. 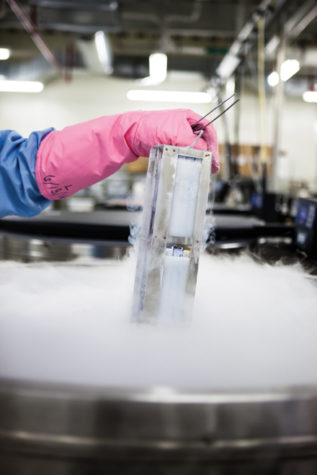 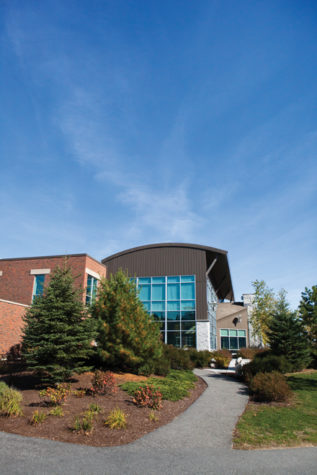 Dr. Edison Liu at the Jackson Laboratory in Bar Harbor: Its the Humpty Dumpty problem. Im not saying were going to get there, but with the tools we have, I think we can begin the process of reconstructing wellness, piece by piece.

The Jackson Laboratory (JAX) in Bar Harbor operates under a bold directive: nothing less than a call to lead the worldwide search for a cure for cancer. The campus sits on a rural stretch of Main Street, a mile from the heart of the village. With its fern-lined pathways and sloping lawns, you could easily mistake JAX for another of Maine’s handsome colleges, but only until you’re asked to complete the security questionnaire at the front desk that reads, “Have you had contact with rodents or snakes in the last five days?”

I do a quick mental inventory and can’t think of any time I’ve spent with snakes recently (or ever if I can help it). I’ve had no exposure to rodents of any kind that I’m aware of. So I check the box “No,” and with that I’m led upstairs to meet JAX’s new president and CEO, Dr. Edison Liu.

At 61, Liu is warm and engaging, an award-winning scientist and doctor who’s quick to smile in his black turtleneck and jeans. He leads me to a couch near a bank of windows in his spacious office and offers tea. I choose herbal. He goes for a “double dose of caffeine.” He came to the United States with his parents in 1957 on a boat out of Hong Kong, part of a “huge migration when millions of Chinese began moving to America to find a better life.”

Liu’s father practiced medicine in San Francisco’s Chinatown. His mother, also a doctor, took care of Liu and his younger brother. I ask Liu about his own call to be a doctor. Was he born with it—this need to find a cure for cancer, which now informs all his days and nights? Liu leans back in his chair and says, “I think what I do now has been part of a personal narrative all along. The key complement, and it’s taken me many decades to get to this point, is this sense that I need to do good. People will always push back and say, ‘well, what does good mean?’ I’m not sure I want to define it.”

For Liu, a trailblazer in cancer biology and genomics, doing good has meant working at the University of North Carolina (UNC) at Chapel Hill, first as an assistant professor in medicine and oncology and then directing UNC’s Comprehensive Cancer Center’s program in breast cancer. Later, Liu led the National Cancer Institute. He followed that with a tenure as the founding executive director of the Genome Institute of Singapore. He arrived at JAX in 2012. It is a place, he explains proudly, that maintains “the world’s only heritage of 7,000 genetically defined mice—extraordinarily important genetic models for making discoveries about health and human disease.” The security questionnaire at the front desk now makes more sense.

He says, “I owe part of my story to my parents for their core values. Values and character trump anything.” He also owes it to certain teachers whom he remembers to this day, especially to Mr. Peterson, his sixth-grade English teacher, “who took this Chinese immigrant kid and exposed him to Hume and Locke.”

Liu did his undergraduate work at Stanford, a school he describes as “completely explosive, so much so that I could take a double major in science and psychology.”

To really understand Liu’s concept of “doing good” you have to wrap your head around his unique theory of what he calls “personal buoyancy.” “What’s best for you in your life?” he asks. “Being three feet under water or thirty feet? We each swim best when we’re buoyant. To find your personal buoyancy you have to know what your composition is and what equipment you have that allows you to swim. Do you have a lot of weights on? Then don’t try to be a deep diver. You have to be equipped.”

He’s an empathetic man who seems completely engaged and focused on his work. He’s also that rare combination of keen listener and generous storyteller. Liu considers his work a kind of play, and his deep passion for what he does at JAX has put him at optimal buoyancy, using scuba gear that allows him to swim whole channels of genetic science and medicine with ease.

When he graduated from medical school at Stanford, Liu simply wanted to guide patients through illness. He knew that being a physician automatically gave him “a portal into intimacy with patients. Professional intimacies. And thus kept me on the path of doing good.”

This was in the 1980s, when clinical cancer medicine didn’t have a lot of happy endings. Many cancer treatments “were draconian and the mortality rates were staggeringly high.” But Liu loved the work: “You were a guide to that patient during a very difficult time of their lives and you were the last portal for many of them. You could do little but you meant so much.”

Liu knew that there was so much more research on cancer to be done. “In medicine it’s a long haul to get to really impactful discoveries for cancer, so I began to ask myself, how do I do immediate good?” Around this time in the late 1980’s, the “oncogene field cracked wide open” and this marked what Liu calls “a huge transition” in cancer research. The oncogene, which is a gene that has the potential to cause cancer, provided a molecular lens for dissecting the genetic causes of cancer.”

Liu went into the lab and was introduced to a whole new world: “the cosmos of biology as opposed to the technical aspect of science and fixing people.” Now Liu was thinking and working on a different plane. He began looking at the genetic causes of cancer, which put him “in a different field of buoyancy.”

In 1996, when the National Cancer Institute (NCI) called him, he embraced the challenge of taking on a large institution for national cancer research: “By having the bully pulpit I could try to change people’s minds about where we should go with our research.”

While he was at the NCI, a colleague in Ireland called and said, “Help me build a cancer center in Northern Ireland.” In time the NCI developed an all-Ireland cancer consortium. When the Good Friday Agreement took hold, Liu worked with former Maine Senator George Mitchell to bring both sides of the conflict “together over cancer research.” A photo of Mitchell and Liu smiling together sits above Liu’s desk. Eventually Liu and the NCI were able to convert “a backwater cancer center in Northern Ireland into one of the very best in the UK.” This is when Liu understood that science, when conducted for this familiar theme of “common good,” would resonate with warring factions and could even be a seed for peace.

In 2001 the government of Singapore called on Liu to run their nation’s Genome Institute. They wanted to “move up the economic scale through life sciences.” Liu knew that if he did things well there, “we could become a model for how science could be the economic driver of a country.” Presidents and prime ministers from all over the world eventually came to his research center to study its success.

The very first time Liu ever touched ground in Maine was when he came for his JAX job interview. But Liu already understood that the mouse modeling at JAX was a deeply exciting and sustainable method of research into the genetics of human disease. Liu’s primer in mouse genetics goes like this: “Mice and humans separated 65 million years ago; they’re not as similar as primates are to humans, but very similar. We know a mouse’s genetics really well and we can engineer its genomes.”

Liu explains that the mice’s proximity to humans in the evolutionary story also makes studying them a low-cost option and “an invaluable model for understanding human disease and genetic complexity in a way that you can then manipulate. And that’s the key,” he says, his voice rising now, “the complexity. Because all systems have complexity.”

The next challenge in genetics is “to reconstruct and understand how the complex genome actually works together. Before we were concentrating on the 747,” Liu smiles, “and its widgets. Now we need to be able to put the plane back together.”

That the dawn of the genome era dovetailed so nicely with JAX’s eight decades of mouse genetic modeling wasn’t as surprising to Liu as you might think. He says, “Serendipity plays such a huge role in what we do in life. This institution might have died a natural death if it didn’t have such impact.”

Another key incentive for Liu when he took the job at JAX was that “the not-good people quotient is very low at JAX and in Maine in general.” He loves the JAX work culture. He’s an avid reader, a foodie, and a talented jazz pianist who frequently plays the Yamaha baby grand parked at JAX’s Roscoe’s Cafe.

He doesn’t find the geographic location of JAX isolating: “Isolation is how you define it. I know people in New York City who are more isolated than we are in Bar Harbor. I think JAX is very connected to the greater world.”

His own family is scattered. His oldest son, Ashton, is in Beijing working in a startup company offering home health care for the elderly. His second son, Connor, is a biology major in college in St. Louis, and his daughter, Summit, is in high school also in the States. Liu and his wife, Maggie, own a small family farm in Illinois, and this is the place that Liu refers to as the family home.

JAX will soon start another chapter in its story of genetic medicine when it opens the Jackson Lab for Genomic Medicine in Farmington, Connecticut. Together the Farmington and Bar Harbor labs will create “a really powerful tool for genetic research: going forward we are going to be able to provide the ability to return to you an actual blue print for reconstructing the 747.”

Liu laughs again and says, “It’s easier to take the plane apart than to put it back together. It’s the Humpty Dumpty problem. I’m not saying we’re going to get there, but with the tools we have, I think we can begin the process of reconstructing wellness, piece by piece, whether it’s aging or cancer.”