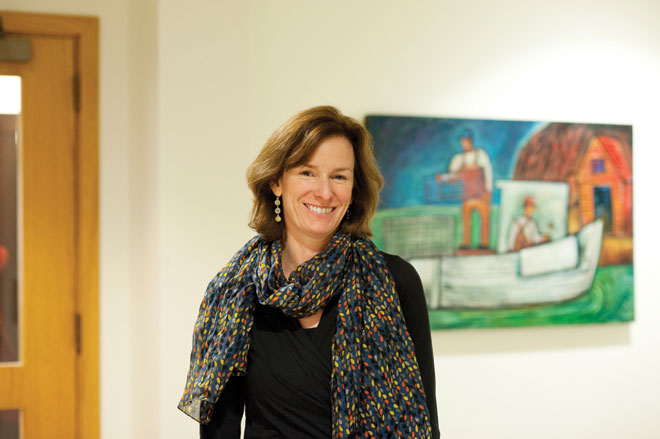 Sara Corbett is an author and journalist whose work has appeared in numerous publications, including the New York Times. She recently cowrote A House in the Sky with Amanda Lindhout, detailing Lindhout’s kidnapping by Islamic extremists in Somalia. Corbett and her husband, Mike Paterniti, live in Portland with their three children.

You’ve written for a lot of different publications, but this book was different for you. Why is that?

I went to meet Amanda Lindhout in 2010. She had been released from captivity in Somalia only a few months earlier. She had lost teeth while she was held captive; she was malnourished. Once I heard her story, I realized how much she had lost in terms of her freedom, her dignity, her ability to voice herself. She had even lost her name in captivity: her Somali captors had renamed her “Amina.” I realized that my job as a journalist had to shift, and that really the greatest service I could give was to let her tell the story…not trying to put my voice in the book, but really just humbling myself to her voice.

In the book, there’s reproduction of notes that Amanda took while she was being held captive. The writing is incredibly tiny. Why was this important?

She was held hostage for 460 days. For much of it, she had nothing. Absolutely nothing. Her story is an exercise in the power of the mind. She had converted to Islam as a survival tactic, and they gave her a Koran and a small notebook, where she was supposed to keep notes on her studies. What she did instead was write a letter to her mother that went on for pages and pages. We have reproduced it at the beginning of the book because to me, it’s an incredible document. When I was researching the book, I read a lot of Holocaust literature. I think survival narratives are part of something that extends way back in time, and that people who endure something have an impulse to record it, to document what the capacity for human cruelty looks like, and on the flip side, what the capacity for human strength and resilience looks like.

What happened between Amanda and the people who were holding her captive?

Amanda’s story is an interesting dance. Her captors were a group of mostly teenage boys. They had never been in close proximity with a woman who was not in their family before. They were intrigued, scared of her, and also had power over her. She had to be dependent on them for food and for kindness. At some point, I think she made a choice. She could either swim inside of real hatred or she could try to understand them. One of the things that she realized had to do with the world that they came from; Somalia hasn’t had peace in 30 years. It hasn’t had a stable government. The schools don’t function. Families are torn apart. People are displaced. When she was able to communicate with these young men, she heard really devastating stories. The further you get into stories like this, the fewer easy answers you find. The world is a really complex place. I think that one interesting vein of Amanda’s story for me was her exposure to radical Islam, which is inarguably one of the giant forces shaping our world today. Amanda had a frontrow seat on fundamentalism. I think what she learned from that is really instructive. She was able to see these young men over time. Instead of family, instead of community, instead of peace or warmth, they were told that heaven came in the form of the afterlife, and that their devotion to jihad would pay off someday. There’s no moral to the story, but I really appreciate people who are out in the world bearing witness to this.

You’ve been a journalist for many years now, covering many different stories. The common theme for you is translation.

When you’re a journalist, your job is to translate. The best thing you can do is try to understand where people are coming from, why they say the things they say, why they do the things they do, and what context they’re operating in. It doesn’t always work, but when it works, it’s a really great feeling.