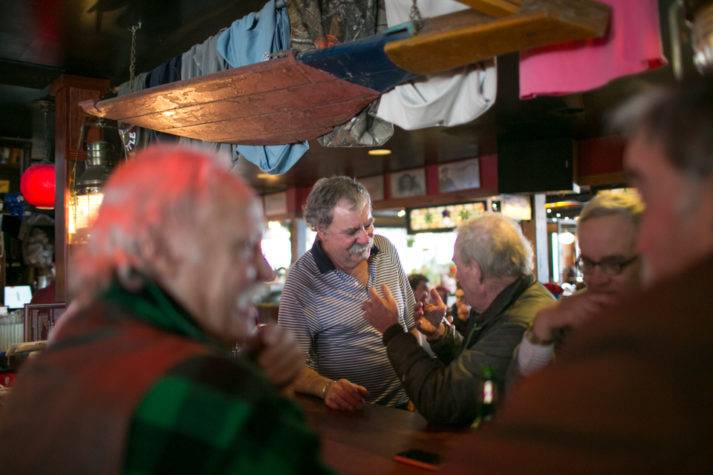 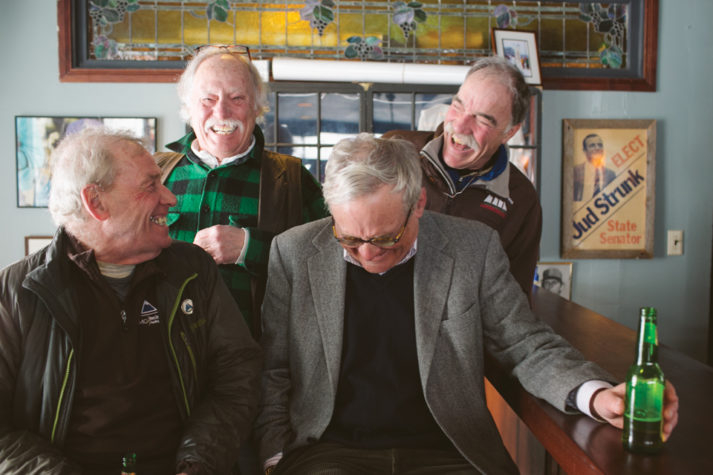 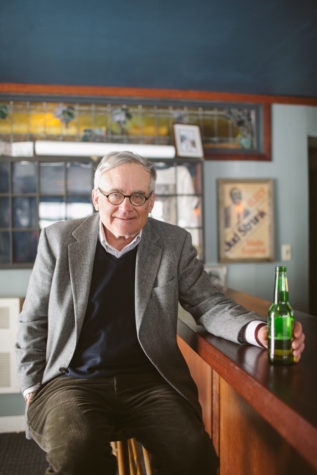 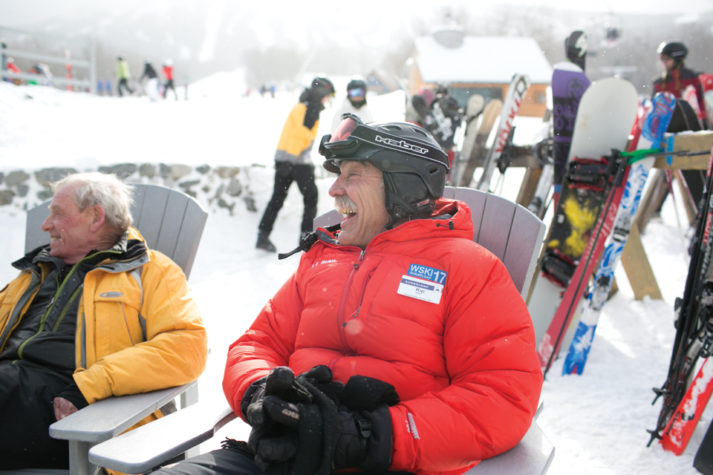 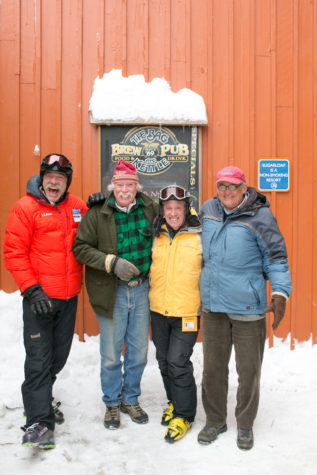 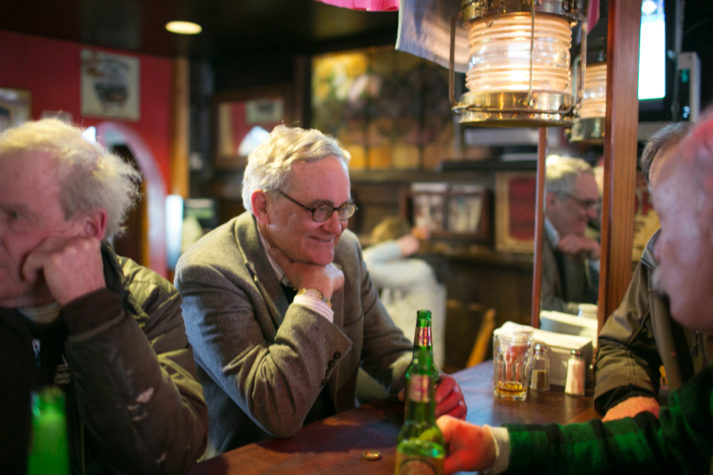 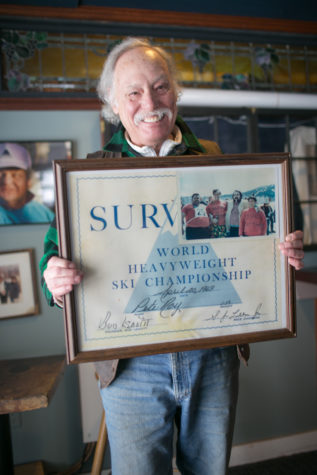 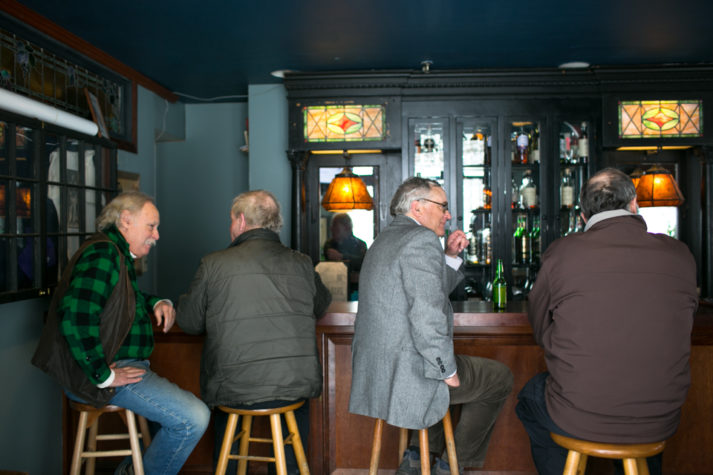 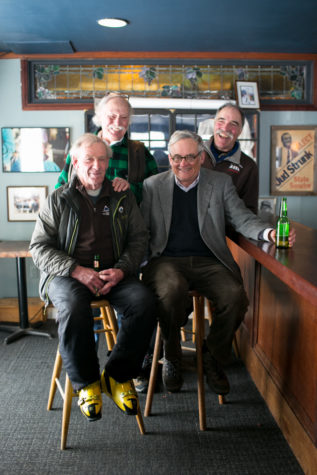 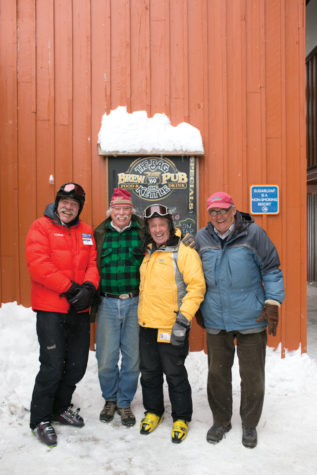 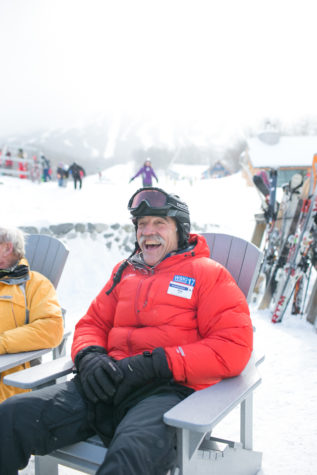 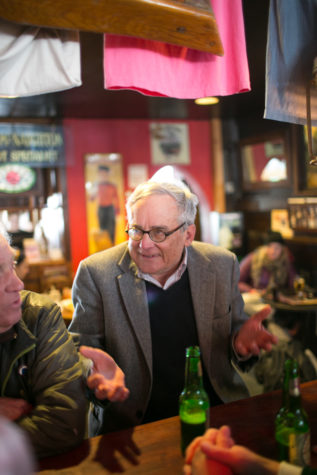 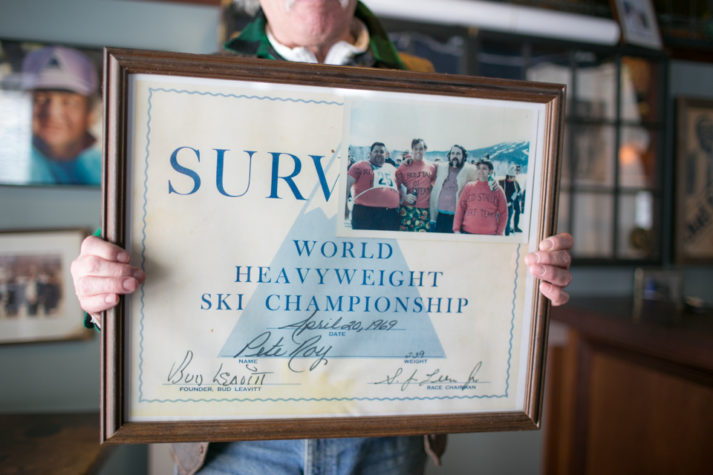 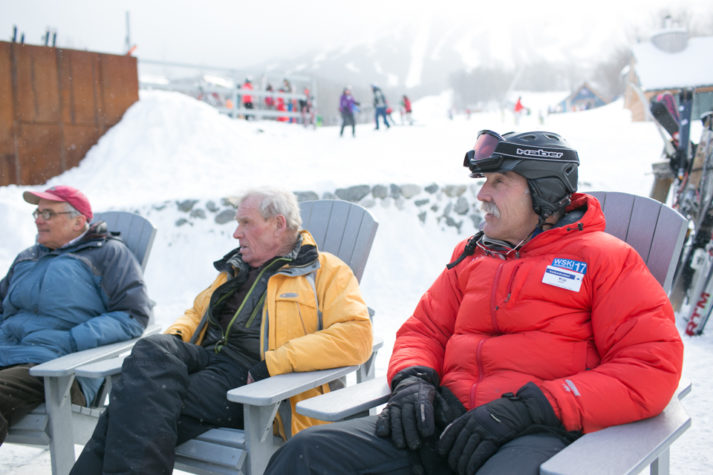 John Christie, Don Fowler, Peter Roy, and Kip Files comprise a posse of serious Sugarloaf old-timers whove been skiing the mountain together for so long that they can finish each others sentences. They each possess an abiding passion for Sugarloaf and an equally strong delight in pulling one over on each other. 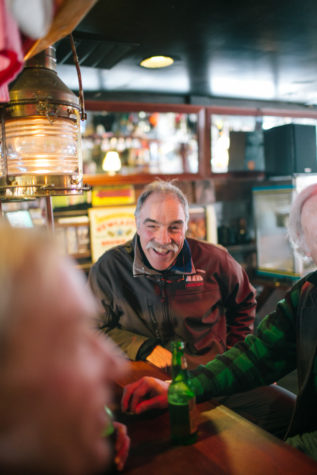 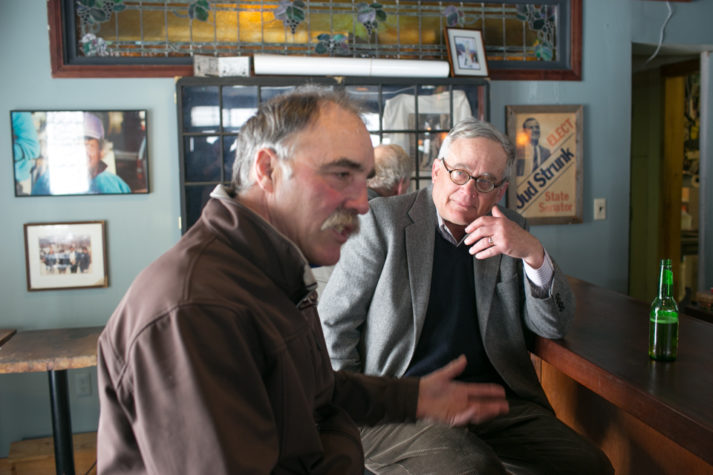 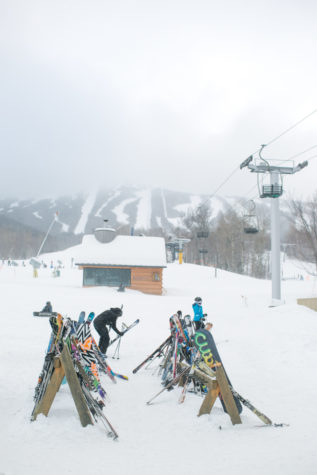 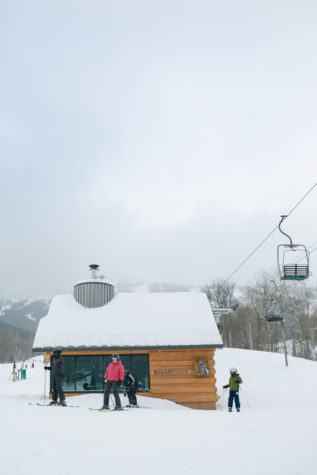 It’s a Saturday afternoon in February, and we’re sitting around the fire pit outside the base lodge getting ready to ski. There’s plenty of snow on the hill, and Christie and Files are in ski boots, ready to jump on the SuperQuad. But Fowler and Roy have something else in mind.

I know most of this crew already, if not by name, then by their legendary reputation. By the time I started skiing here in the late 1970s, it was impossible not to hear stories about these guys. Christie was a Bowdoin College grad who first came to the mountain in 1961 to race the Sugarloaf Schuss. Within two days, he got so hooked on the place that he took a job with the ski patrol. Four short years later, he was manager of the entire mountain. Fowler was only a teenager in 1957, when he drove up to Carrabassett Valley to check out the mountain’s infamous steeps. Roy was a regular during his Colby College years, and he came for good in ’68. Files was the latecomer—a Sugarloaf weekender from Bangor until 1975, when he moved slopeside.

“And you are now no longer on probation, Kip,” Fowler announces.

I ask them if they want to take some runs. Five minutes later, I find myself following the crew to the Bag, the oldest watering hole on the mountain. We each take a stool around one of the long, wooden bars. Then a line cook walks out of the kitchen and says to me, “You’re writing a piece about these characters?” And starts laughing hysterically.

Files grew up watching Christie as a regular on The Bud Leavitt Show, one of the first outdoor television shows in Maine. This was the early 60s, when Christie was a
ski patroller, and Files was a ski-crazed teenager. The camera would pan to Christie perched on a pile of snow in the Sugarloaf parking lot, demonstrating the perfect turn. Files never missed an episode of the show if Christie was on it, and he thought Christie had invented the stem Christie and named it after himself.

Files is now an anchor on the mountain’s beloved local WSKI Channel. He gives Sugarloafers their daily ski report and talks all things skiing with an enormous smile and a booming baritone. When he’s not at Sugarloaf, Files owns and captains a schooner out of Boothbay Harbor called the Victory Chimes. It’s the vessel you see on the back of a Maine quarter.

Files points to the three characters sitting next to him. “These guys can tell the story of this mountain better than anyone else at Sugarloaf. They are the link in the chain.” If there’s a theme to their earliest Sugarloaf moneymaking schemes, it seems to involve a liquor license. Christie’s first stint was as bartender at Judson’s, back down the ac- cess road. Files was the inaugural bartender at the Sugarloaf Inn, and Roy tended bar at the Red Stallion, an off-mountain bar fa- mous for parties that raged for days. Fowler asked his wife on their very first date one late night at the Red Stallion. She hoped he’d forget about it the next day, but they’ve been married 40 years.

Roy didn’t have a clue what he was doing at that bar. He just made it up as he went. Somewhere along the way he got the nickname Captain America, but his modesty precludes him from telling us what that means. He’s now a lawyer and a big-hearted, silver-haired comedian whose personal Sugarloaf legend includes coming down the mountain one afternoon inside a refrigerator. He never wants to leave. “It is like a quilt your grandmother made,” he says and laughs. “It’s my happy place.”

In 1965 Christie laid out the mountain’s first top-to-bottom lift line—a gondola that he ordered from Germany. The problem with “The Year of the Mighty Gondola,” as Christie calls it, was that no one could read the German instructions, and soon the lift installation became a head-scratching, do-it-yourself project. Once the towers were finally up and the lift was running, Christie’s big job every day was “to climb into one of the four-person gondolas with a walkie-talkie and ride it to the summit to test the wind.” It wasn’t a very sophisticat- ed monitoring system. “I’d say ‘slow it down on tower five! Holy crap it’s windy!’”

Fowler is the only man wearing tweed and corduroy at the Bag. He has the calm demeanor of a history professor, but he’s probably more ski-obsessed than anyone else in the room. He takes his skiing seriously, and moved his law practice from Portland up to Carrabassett years ago so he could get more runs in. In fact, Fowler has already gone skiing this morning. He got to his office at 5:30 a.m. to get things squared away. Then he drove up to the mountain for first tracks. Afterwards he headed back to the office.

Fowler still tries to get first tracks every day that the mountain is open, and many days when it isn’t. He doesn’t think about why he skis. He just does it.

“One day there was a wind hold,” Files says, “and Don got a courtesy bus to take the four of us up as high on the mountain road as we could possibly go. Then we made it down and called that a ski day.”

Fowler is also the in-house historian on the mountain, keeping a daily journal of what trails he skis and what antics his friends pull. He’s always there. “It’s my life,” he says of the mountain. I feel a wave of emotion sweep over the men just then, and I could swear several of them get misty-eyed. “And you can’t ever leave this place because you’d miss something. It’s like watching one of those long-running soap operas. It’s multi-generational.”

For a while Christie did leave. He was lured away first to “wreak havoc in the ski industry” at Mount Snow. And then to Saddleback, where he became the owner. But in the early 90s, Christie came back to Sugarloaf for good. “One remarkable thing about John,” Fowler says, “is he was the CEO of Sugarloaf and then Mount Snow, and then he owned Saddleback, and all three of those mountains are somehow still in business.”

“But all under new ownership.” Christie laughs. His laugh is really more a cackle than a chuckle. And it’s infectious. Once he starts, none of us can stop. In fact, Roy laughs so hard that tears spring from his eyes. These men are in the business of perpetually cracking one another up.

“Sugarloaf is two things at once,” Christie says once he catches his breath. “A mountain and a feeling. The mountain was the magnet.”

“This is the most consistent place in my life,” Files says then. “It’s hard to make a living here. So I don’t.” We all laugh, and he continues. “I came because of the mountain but I stayed because of these people. When I get to Kingfield, everything starts to slow down. It’s like sea-fever on the ocean. I don’t have a word for it. You look out when you’re up there and you see the Bigelows and maybe Mount Washington and you say, ‘Where else would I rather be?’ And I’ve skied out west. I’ve skied everywhere. And I always come back.”

Files’s favorite run is the Gondola Line. “I cut that trail,” Christie tells him, and smiles. “Then we built T-bars number four and number five in 1961. Then we cut Widowmaker and Ramdown. Those are my favorites.”

Fowler likes Wedge because it’s narrower and follows the terrain of the mountain. The Bag is Roy’s favorite trail: the Bag, or Mahogany Ridge, as he likes to call the wooden bar that wraps around the back of the pub. If not the Bag, then he’ll settle for skiing Narrow Gauge.

“This place,” Files says, “has been through some hard, hard times. Terrible seasons with no snow. But the pass-holders like us never left. The loyalty factor here is huge.”

“In the old days,” Christie says, “we foot- packed the trails in the afternoon and got paid a lift ticket. I remember when Amos Winter (one of the original Sugarloafers) wouldn’t sell you a ticket unless you’d side-stepped up the trail with six people in skis to help pack in the trail.”

The physically demanding nature of the mountain, coupled with its remoteness, ends up being self-selecting. “It takes a cer- tain kind of skier to endure the trip here and the weather and the terrain,” Christie says. “The other good thing here is that the valley was a very easy place to build ski camps on.” Christie paid a premium for his river spot down in Carrabassett—a whopping $50.

But change was coming to the mountain. It’s always coming. “You have to grow,” Files says. “You have to have snowmaking and quads. Or we wouldn’t be skiing. You have to have grooming. And you can’t pull off the shenanigans we used to in the 70s. And change bothers some people. Change is always hard.”

“It’s like Cheers,” Fowler says. “Everyone knows your name. The problem is, at our age we can’t remember anyone else’s name. But change is inevitable.”

Christie smiles. “Well, I can get you dis- barred right now, Peter. I can do that very easily.”
Roy smiles. “If we were all hooked up to an EKG machine, we would all calm down when we rounded Oh My Gosh Corner. We see the mountain and we say, ‘I’m here.’”

The light is waning now. The last lifts have closed and après-ski hour has come and gone. I’ve still got my ski boots on for that run I never got to take with these characters. I don’t want to ski home in the dark, so I stand to leave. Christie says to me then, “So, this piece you’re writing. It shouldn’t be about each of us as separate people. It should be about friendship.”

I nod at him. I get it. Friendship. It’s a story about a very special mountain in Maine, a mountain dear to many of our hearts. But it’s also a story about these four men, and how they keep each other laughing and keep each other skiing well into the seventh decade, and what could be better than that? So this is where I’ll leave them, at Mahogany Ridge, deep in friendship.