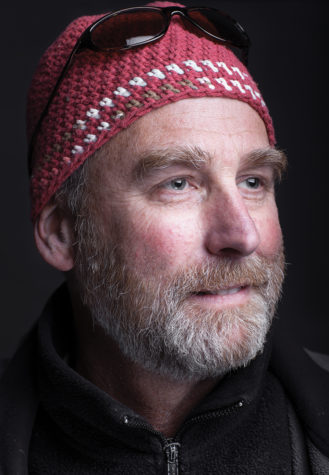 Woody Hughes is the owner of Bethel’s Mill Hill Inn. An acclaimed potter, he previously taught at Dowling College and Parsons The New School for Design. Hughes returned to Western Maine in 2001 to teach pottery and design at his alma mater, Gould Academy. In 2010, he left Gould to open the Mill Hill Inn with his wife and son.

Q. Your food is tasty and interesting, yet unassuming.
A. My approach is very simple: I use good ingredients and I don’t try to get in over my skillset. Hopefully it’s like going to a good potluck where there’s going to be different tastes—it’s Mediterranean at times; it’s Asian at times. My original business plan was to have 18 guests and have them invite 18 friends, and that was the format I thought I could manage. It’s supposed to feel like we’re all family.

Q. How did your own family influence your life now?
A. My father died when I was young, and I was raised by my mom. She was a strong woman and a Navy wife. My father was a high-ranking officer. In the 1950s, they lived all over Europe, and she was always entertaining people. My mother was also a Home Economics teacher, so I learned many domestic skills. I think some of this comes in to play with what I currently do. I give my mother a lot of credit for setting this preliminary stage. I only have vague memories of the night my father died, and I have vague memories of who he was. I’m married to those: I grow roses that he grew; I still have his leather bomber jacket. I still cook Brussels sprouts, which he loved, in the restaurant. There are funny things that I do to honor him, and my mother, too, because she would’ve loved the Mill Hill Inn.

Q. You grew up in New York. How did you end up at Gould?
A. There’s a moment in life when you’re not doing well as a kid sometimes, and I found myself in that situation. Nothing was really working for me. My neighbor went to Gould (she is now an artist living and working in Portland), and when it was my time to get in a little trouble, it was a good solution for my family. The academy really saved my life. And when I returned when I was 45, in 2001, once again it centered me. I’m still connected to Gould emotionally even though I’m five years out.

Q. Although you’re not teaching at Gould anymore, there’s still an educational aspect to the way you approach the inn.
A. I was really hands-off when I taught pottery. I gave very short demos, and then I would constantly visit students as they were grappling with whatever I introduced. It’s the same thing when we work in the kitchen. I don’t have that many instructions. You’re just sort of thrown in, and then your skillset grows around you in a natural way. Everyone has a different strength, and I don’t try to curb that. It’s been working because I have a crew of about six and they’ve been with me for a full year now.

Q. How did you become interested in pottery?
A. It began when I was 16 years old. It was the first thing in life I was good at, and people recognized that I could do it well. That fed into the desire to get better, and my work ethic. What’s great about pottery is that it is so process-oriented. If you hit a dead spot, there are elements of the process that will get you working again. Whether it’s wedging clay, or remaking glazes, there’s always something to do in the studio. It’s just like a kitchen. You might not be serving dinner all the time, but often you’re prepping and getting ready. That’s why the kitchen works as well as it does for me. Just like ceramics, you learn how to use the materials; you learn when you can use them; you learn how to store them; and you learn how to present them. It’s so similar it’s crazy.